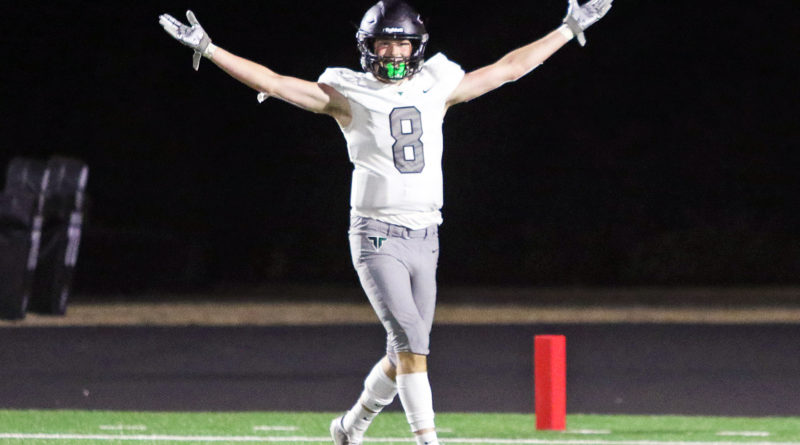 There were still a few minutes before the kickoff of the Tigard football team’s game at Mountainside, but Tigers junior lineman Boone Coffman, as he was getting ready for battle, already was well aware of just how crucial the upcoming contest would be.

“This is a huge game,” Coffman said to his Tigard teammate, junior Vaughn Croxton, as they stood on the sideline. “It’s a turning point for us.”

As it turned out, Coffman might very well be correct.

The Tigers, who entered with an 0-2 record, picked up their first win of the season in impressive style, as they powered their way to a 30-13 victory over the Mavericks in a nonleague contest Friday at Mountainside High School in Beaverton.

“It’s pretty big. It was big to come together as a team,” said Tigard junior linebacker Austin Goetz, who had a blocked punt. “That was really important to us. I just love being out there with my guys. I think that just enjoying it and communicating really helped us get this win.”

While getting that initial victory this season was important to the Tigers, the team also, at least in the mind of some players, picked up some revenge. In the second round of the 2019 Class 6A state playoffs, Mountainside got a 34-31 win over the then-unbeaten Tigers in a game played at Tigard High School.

“It’s very big,” said Tigard senior lineman Leif Beers, who was a member of the 2019 Tigers squad. “They took us out in the playoffs in 2019, and it feels really good to get them back. It’s an amazing feeling right now.”

“It’s pretty important to us, since they beat us in 2019 playoffs,” Goetz said. “My brother (Bryce Goetz) was in that game, and he got a concussion in it. So, we had to come out and show who we were, who we are, and who we’re going to be.”

Past history aside, getting this season’s first victory was the big thing for the Tigers on Friday.

“We just wanted to come out here and get our first win,” Goetz said.

Mountainside, despite a strong effort, is still looking for its first victory of the season, as the Mavericks moved to 0-3 with the setback.

“I think we played hard. I definitely know that I could have played better. I was disappointed in my performance,” said Mountainside senior quarterback Brian Mannion, who passed for 254 yards and two touchdowns. “I know we’re fired up. We’ve got a lot of young guys, new guys, who haven’t played a lot of varsity football yet, but we’re just three games in. We can still make the playoffs. It’s not the start we wanted, but we just have to get some wins.”

Right from the start of the contest, Tigard turned to its power running game. The first time the Tigers had the ball, they drove 56 yards in eight plays. Grant, who carried seven times for 45 yards in the drive, capped things with a 2-yard touchdown run. The extra-point attempt was blocked, leaving Tigard with a 6-0 lead with 6 minutes and 59 seconds left in the first quarter.

Mountainside was able to answer. The Mavericks had to punt on their ensuing possession, but the punted ball glanced off a Tigard player, with Mountainside junior Jared Lang falling on the loose ball.

It didn’t take long for Mountainside to capitalize on the turnover. On the very next play, Mannion hooked up with junior Quinn O’Connor on a 25-yard touchdown pass over the middle. Junior Holden Phillips added the extra-point kick, giving the Mavericks a 7-6 lead with 5:17 remaining in the opening period.

Tigard, and Grant, were able to respond. With the Tigers having the ball at the Mountainside 45-yard line, Grant, after taking a handoff from Tigard junior quarterback Cameron Masters-Doble, was swarmed, and it looked like he was destined to be tackled at the line of scrimmage. But somehow, Grant broke free and sprinted 45 yards for a touchdown, giving the lead back to the Tigers, at 13-7, with 9:28 left in the second quarter.

“I thought I was down on that one, but I just spun away, and I just had a lot of green space in front of me,” Grant said with a smile. “That felt good. I owe it all to the O-line.”

Tigard, behind its running game, scored again the next time it had the ball. This time, it was junior running back Luke Davis doing the damage. Davis carried four consecutive times for 47 yards, including a 21-yard scoring run, increasing the Tigers’ lead to 20-7 with 7:09 before halftime.

Now, it was Mountainside’s turn to try to answer. Mannion completed passes of 23 and 11 yards to senior Keenan Speer-Johnson. The standout quarterback added a 13-yard completion to O’Connor and an 18-yard strike to senior Kadin Kingsbury, moving the ball to the Tigard 3-yard line, where the Mavericks had first-and-goal.

On the next play, it looked like Mountainside was about to run the ball into the end zone. Instead, Tigard senior defensive back Kellen Jolley forced a fumble, and then he fell on the ball right in front of the goal line for a crucial turnover, coming with 2:45 to play in the second quarter.

“On defense, we did great,” Beers said. “Our D-line got quite a lot of pressure, and that helped us a lot.”

Early in the third quarter, it was the Tigard special teams that stepped up.

The defense forced Mountainside into a three-and-out in its first possession of the period. Goetz, storming through the middle of the line, blocked the ensuing Mavericks punt.

“We didn’t really have a blocked-punt plan. We were just trying to get a return,” Goetz said. “But I turned to my buddy, and I said, ‘I’m going to try to pull through on this one,’ and I went in untouched. It felt pretty good. I was super happy.”

Davis scooped up the loose ball after Goetz’ block, and he ran all the way to the Mountainside 1-yard line. The Tigers weren’t able to punch the ball into the end zone, but junior Nate Duenas booted a 19-yard field goal, upping the Tigard lead to 23-7 with 9:06 left in the period.

The Tigers took that 16-point margin to the fourth quarter, but the Mavericks weren’t done fighting yet — not even close.

Following a 12-yard pass from Mannion to Speer-Johnson on the final play of the third quarter, the Mavericks opened the final stanza with a 31-yard touchdown strike from Mannion to senior tight end Zac Brown, who was wide open in the middle of the field.

Tigard senior linebacker Elijah Jackman deflected a pass on a 2-point conversion try, leaving the Tigers with a 23-13 lead with 11:53 to go.

Tigard wasn’t able to score on its next possession, but, nearly as important, the Tigers ate a large chuck of time off the clock. With Davis carrying the ball nine times for 28 times during the drive, Tigard took 7:57 off the clock before turning the ball over on downs on the Mountainside 19-yard line.

After the Tigard defense forced the Mavericks to turn the ball over on downs, Davis reeled off a 36-yard run. Grant scored from seven yards on the next play, coming with 1:11 remaining, giving him three touchdowns for the game and capping the scoring in the Tigers’ 30-13 victory.

“It was all the O-line,” Grant said in regard to his three touchdowns. “Those guys were amazing tonight. They were working their butts off all week, as well, and they did great.”

With the offensive line of Coffman, junior Reese Hare, senior Manny Wilder, junior Mathew Studer, senior Zach Yuzon and Beers, among others, leading the way, the Tigers rushed for 320 yards on 49 carries.

“We had quite a few good blocks,” Beers said. “We couldn’t have done it without our O-line and our running backs finding the holes. They did a great job.”

“Luke and I have been waiting to get some reps back there together for a while,” Grant said.

“Our defense was outstanding,” Grant said. “They had a couple of big plays, but besides that, we were able lock down, especially in the secondary.”

“We’re just great at communicating, honestly,” Goetz said. “I don’t know what I’d do without our other outside linebacker telling me if I have to blitz or not. We just love flying around.”

Now, the Tigers are looking to build on their first victory of the season.

“There’s a lot for us to work on,” Goetz said. “We’re going to enjoy tonight and then work on improving some more tomorrow. This was really fun. I love it. I love football.”

“It’s one down, but tomorrow is a new day, and we have to get ready for next week,” Grant said. “This was really fun. It felt really good. We’ve had some history with this team, from the playoffs. It was motivation. It was brought up in practice a few times. The guys who were sophomores then, and now are seniors, wanted to get some revenge.”

For Mountainside, Mannion completed 21 of 48 passes for 254 yards, with two touchdowns and no interceptions.

“I think we were just a few plays away,” Mannion said. “We had the close call on the goal line early in the game. With that call, it would have been a different game, then who knows how it goes?”

“It was sad that we didn’t pull it out, but we’ve got Sherwood next week,” Mannion said. “I think we’re at their place. They’ve got a new stadium. They kind of copied us, but we have to take them down.”