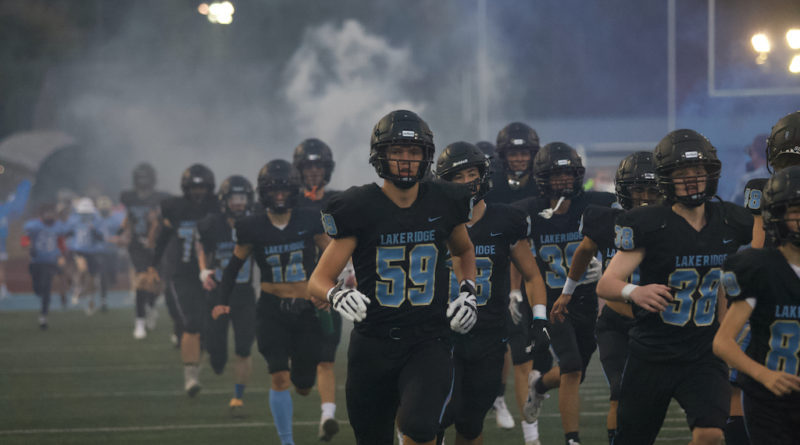 LAKE OSWEGO — While it remains to be seen how far this Lakeridge team can ultimately go, one thing’s for sure.

The Pacers should be on everybody’s radar by now.

No. 7 Lakeridge passed another test with its third consecutive blowout win to start the season, taking down previously unbeaten Liberty, 42-13, on Friday night at Lakeridge High School.

The Pacers were pegged before the season as a program on the rise, and it’s been so far, so good in fulfilling that promise.

“We know Lakeridge has been disrespected in the past,” junior quarterback Ryan Oliver said. “We want people to know that we’re different this year. We’re here for a winning culture right now, and it’s a new Lakeridge program.”

The Pacers have scored at least 40 points in all three games with an average margin of victory of 28.3 points. Liberty was no pushover, entering the game having outscored its opponents 108-0 through two contests.

Lakeridge senior Jake Reichle was spectacular on both sides of the ball, accounting for four touchdowns — the second time he’s accomplished that this season. The 6-foot-3, 200-pound safety and running back scored in every way, including two rushing, one receiving and one interception return.

It follows his four-touchdown performance against Sherwood in the season opener, plus two more last week against Jefferson. With 10 touchdowns through three games, Reichle was hesitant to give himself any credit — instead, giving his teammates their just due in their success.

“It’s not all on me,” said Reichle, who finished with seven carries for 131 yards. “Our O-line played great. I wouldn’t have done it without them. Ryan makes great reads as the quarterback. It was a team effort. I got four touchdowns because the rest of the team played great.”

Oliver said he can tell Reichle is a man on a mission after last season was cut short because of COVID-19. Now, it’s time for the Pacers to prove themselves as a program with no time to waste.

“I think this year made him realize he’s got nothing to lose right now,” Oliver said. “He really is going all-out every game, giving 100 percent going both ways and balling out on both sides. It’s personal for him this year.”

Reichle’s final score came on a 63-yard run with 4:51 to go in the third quarter, zigzagging his way through Liberty’s defense to give his team a 35-13 lead.

In the first half, Reichle was all over the field. He scored twice in the first quarter — a 3-yard run and a 9-yard catch. He also had a 45-yard interception return for a touchdown just before halftime to give Lakeridge a 28-10 lead.

“We prepared really well after a sloppy performance at Jefferson,” Reichle said. “We just brought it together, played as a team and showed what we could do. We tried to make a statement to the rest of the state.”

Lakeridge also got touchdowns on sophomore Joey Olsen’s 45-yard catch in the first quarter and Oliver’s 7-yard run in the fourth to put the game away.

“We think we can score on anyone,” Oliver said. “We think our defense can hang with anyone. We know that we can play with anyone, so it’s just week in and week out, we need to make a statement — no matter who we’re playing, no matter what we’re going against. Every week is a statement week.”

The Pacers’ defense was just as impressive in totaling five takeaways, including four interceptions of Liberty senior quarterback Hiro Diamond.

Lakeridge senior Dallas Kuenzi had two interceptions within the first six minutes of the game. Reichle and senior Zachary Larson had the others.

Sophomore Cole Holum added a fumble recovery in the fourth.

“Everyone came out and played together as a team and did their job,” Reichle said.

For the Falcons (2-1), it was a frustrating night in which they ran more than twice as many offensive plays (61-29) as Lakeridge and still lost by 29.

Diamond showed his skills as a dual-threat quarterback, completing 8 of 17 attempts for 114 yards. He had 27 carries for 100 yards. He scored Liberty’s lone touchdown on a 4-yard run midway through the second quarter.

“Obviously, it wasn’t the result we wanted,” Diamond said. “But I’m just speaking for the team overall, it’s something we can learn from. We can get back; (it’s) still early in the season. All we can do is learn from it and clean some stuff up.”

Liberty coach Eric Mahlum acknowledged his team got “outplayed” and accepted the responsibility for the loss.

“We put ourselves in the hole with penalties, turned the ball over, things we had not done,” Mahlum said. “We weren’t prepared right. That goes back to me as a coach. I did not have our guys prepared when they’re making mental mistakes like that.”

Lakeridge (3-0) has one more nonleague game before its crucial Three Rivers League stretch comes around with powerhouses West Linn, Tualatin, Tigard and Lake Oswego all scheduled for the final month.

“We know the potential we have,” Oliver said. “We know the talent we have, the skill we have and how hard we work. It’s just one week at a time and the rest will take care of itself.”