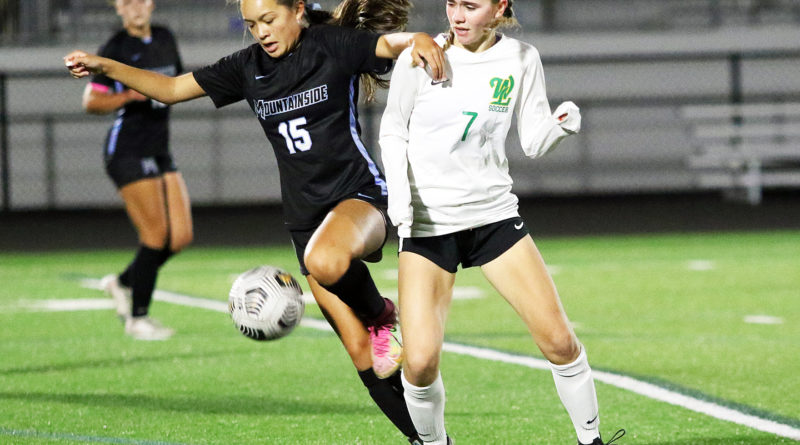 But there sure was plenty of action.

There was definitely a high level of intensity.

And, both teams say, there’s plenty of promise for the rest of the season.

The West Linn and Mountainside girls soccer teams, both ranked in the top 10 in the latest OSAAtoday Class 6A coaches poll, battled their way to a hard-fought scoreless tie in a nonleague match Wednesday at Mountainside High School.

“It was pretty intense. We had to communicate the whole time and stick together,” West Linn sophomore defender Bernie Wayland said. “I think we were good at keeping our intensity high the whole game and pushing at the end, 100 percent.”

“It was pretty good,” Mountainside coach Travis Schoonover said. “I felt like we were a little off. In the final third, we could have been a little sharper. But, overall, it was alright.”

Mountainside, out of the Metro League and ranked No. 4 in the coaches poll, moved to 4-0-2 with the tie.

“Our schedule has definitely had some games like this already,” Schoonover said. “We’ve had some pretty tight games against some good, quality opponents already. But, yeah, this one will definitely help get us ready for league play.”

The Mavericks are also looking to excel beyond their Metro League schedule.

“I think we can make it pretty far in the playoffs, and if we keep playing well together and keep getting better as the season goes on, I think we have a real good shot this year,” Nees said.

West Linn, tied for the No. 7 spot in the coaches poll, moved to 2-2-1 with the deadlock. The Lions, coached by former Tualatin standout Madison Campbell, also have lofty aspirations for the rest of the season.

“I think we have a lot of potential,” Wayland said. “We think we could win state, hopefully.”

“We’re looking to make the playoffs, and maybe win our league,” Cheldelin added.

Both goalkeepers also stepped up in the opening minutes.

West Linn senior Tori Garcia made a block on an open shot by Mountainside senior Allison Tattar. Just a little more than a minute later, Mavericks freshman Issabelle Cory made a sliding kick save of a close-range shot by Lions senior Thalia Farah.

Cory was put up to the test during the remainder of the first half. West Linn had six more shots on goal in the opening 40 minutes, including attempts by senior Andi Corbin, senior Ruby Larsen, senior Campbell Sheffield and Hardin. Cory made the save on all of those shots.

“She’s been a nice addition for us,” Schoonover said of Cory. “She’s a freshman, so we’re fortunate to have her.”

Oetker also made a key defensive play for Mountainside in the first half, heading away a corner kick in front of the Mavericks’ goal.

Mountainside had just three shots on goal in the first half, coming on attempts by Tattar, senior Gwendolyn Saing and junior Nina Rhode, with Garcia making the save on all of those shots.

Just 10 seconds into the second half, Mountainside senior Emma Rogers blasted a line-drive shot from 25 yards, with West Linn junior Kyra Jeffrey, who played in goal for the Lions in the second half, having to quickly dive straight out to her left to deflect the shot.

The Mavericks kept firing away. Senior Leila Hausia-Haugen had a shot from 30 yards saved by Jeffrey with 36 minutes and 54 seconds left. Oetker had a shot from 17 yards on the left side, off a pass from Rhode, sail just barely wide left of the West Linn goal with 14:46 remaining.

With 8:54 to play, Hausia-Haugen’s spin-around attempt from 15 yards on the left side flew over the crossbar of the Lions’ goal. Mountainside’s last attempt, a shot by Hausia-Haugen from 20 yards, was saved by Jeffrey with 1:47 remaining.

“We played a lot better in the second half,” Nees said. “Everyone just kind of agreed that we could do better. We tried to come out with intensity in the first half, but when it wasn’t there, we made sure to bring it in the second half.”

“They probably had the better of the first half,” Schoonover said. “We got going in the second half, but we couldn’t find that one goal we needed.”

West Linn’s best scoring opportunity in the second half came on a shot by Hardin from 30 yards, with Cory making a leaping save with 12:49 to play. Cory also made the save on a shot by Sheffield, coming with 6:56 remaining.

Soon after, both teams found themselves having to settle for the 0-0 draw.

“It was definitely an action-packed game,” Cheldelin said. “The forwards on their team like to switch back and forth a lot, so we had to always be focused in, or they’d run behind us.”

Both teams also are taking pride in their defensive effort in the contest.

“I think that our defense was super solid, and we really held in there toward the end,” Wayland said.

“We had to work together, really hard, because they definitely had some strong forwards,” Cheldelin said. “When we work together as a team, we’re super solid.”

The same likely could be said about the Mavericks.

“Sierra, she’s our lone returner on the back. The other three and our goalkeeper are all new, so we’re trying to break them in,” Schoonover said. “We’ve had two shutouts in the past two games, so that’s been good, but we’ve scored only one goal in the last two games, so, on the flip-side of things, we need to turn that around and do a better job.”

“We’ve been playing West Linn for a couple years, and there’s like a little rivalry going on. We definitely made sure that it was intense,” Nees said. “We’ve been working more together and getting better as the season goes on, as we play more games together.”

“This was super fun. I love coming out here and competing,” Cheldelin said. “This will help us prepare for league games. We know how it feels to be under pressure and having to focus the entire game. We were always pressured.”

Mountainside had seven shots on goal and two corner kicks.

“We need to keep the intensity the whole game, instead of bringing it in just the second half,” Nees said. “That would make us a lot stronger. If we could get a few chances on goal in the first half, and maybe get some in, then we wouldn’t have to keep trying for that goal at the end.”