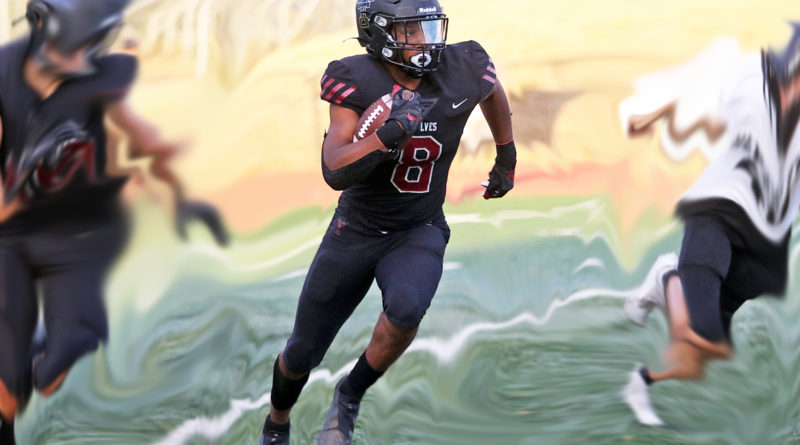 Malik Ross got the Tualatin football team off to a flying start in last week’s game against Silverton with a spectacular special-teams play.

Ross would finish the contest with what very well could have been a game-saving play on defense.

In between, the 6-foot, 190-pound senior had many, many big plays on offense, including a momentum-shifting 63-yard touchdown run.

Yes, it’s easy to say the super-speedy Ross, who plays at running back and safety, was a crucial factor for the top-ranked Timberwolves — in all three phases of the game — in their thrilling 35-28 win over the Foxes.

“He started the game hot and ran it back for us, and then he finished the game big — real big,” Tualatin senior receiver Peter Burke said of Ross following the victory.

“He’s magic,” Tualatin coach Dan Lever said. “It’s unbelievable what he does out there.”

“Showing up in the clutch. That’s what I do,” Ross said with a smile as he stood behind the south end zone at Tualatin High School.

After what Ross did Friday, it would be hard to argue that.

And it didn’t take long for the Malik Ross show to start.

As many of the fans at Tualatin High School were just settling in, Ross was off and running.

On the game’s opening kickoff, Ross watched the ball bounce off the turf, grabbed it, and he was gone. Taking off, heading up the middle of the field, Ross made a cut to the right, sprinted up the sideline, all the way to the end zone for a spectacular 86-yard touchdown return, giving the Timberwolves the lead just 12 seconds into the contest.

“I finally got a kick return (for a touchdown),” Ross said. “It’s only the second game of the season, but I got four chances last week in California (a season-opening 44-33 win at Menlo-Atherton on Sept. 3) and I didn’t really get close. For sure, that was motivation for tonight.”

Ross is all about motivation and momentum.

“I think that momentum is motivation,” Ross said. “We started off with momentum, and that got us hyped. As that goes, we can’t let that drop. We have to stay with the momentum and force that we have. That’s a lot of motivation for us.”

The motivated Ross gave Tualatin some needed momentum later in the game.

Silverton, getting a 42-yard touchdown pass from senior quarterback Jordan McCarty to junior running back Jackson Pfeifer, trimmed what had been a 27-7 Tualatin lead to 27-21 with 7 minutes and 15 seconds left. Momentum seemed to be totally on the Foxes’ side at that point.

But Ross had other thoughts.

On the Timberwolves’ next possession, Ross scored on a 63-yard run, upping the margin to 35-21.

There was another big play to come for Ross — maybe the biggest.

The persistent Silverton squad, getting a touchdown run from McCarty, trimmed the Tualatin lead to 35-28. With less than a minute to play, the Foxes were marching toward a potential tying touchdown. McCarty scrambled 11 yards, going out of bounds at the Tualatin 9-yard line with 35 seconds remaining.

On the next play, McCarty looked to throw a pass over the middle toward the end zone. But Ross figured out what was going on. Seemingly appearing out of nowhere, Ross sprinted over and dived forward. Reaching out, he grabbed the ball just a few inches off the turf for an amazing interception at the 1-yard line with 30 seconds on the clock.

“That was the play of the night,” Lever said. “It wasn’t looking good for us at the time.”

“I was able to read the quarterback,” Ross said. “Being the safety, you’re not always going to have the speed or quickness to get to the spot, so it’s better to read it and get to it before that. I think I was able to outsmart the quarterback a little bit.”

“You hold your breath every time he touches the ball,” Lever said.

There were the three huge plays — the 86-yard kickoff return for a touchdown, the 63-yard scoring run and the clutch, last-minute interception.

Of those three big plays, which was Ross’ favorite?

“I’d say all of them, but the clutch plays are the ones that, if we’re being honest, you remember the most,” Ross said. “So, I’d say the interception at the end, because I’d been having a rough game on defense, in my opinion. The whole game, I was missing tackles, and the quarterback was getting by me on my blitzes. I didn’t let it get in my head, and I stuck with it. On defense, I said, ‘You’re going to make a big play.’ And, finally, I made a big play.”

Actually, big plays seem to be anything but a rarity for Ross, who also is one of the state’s top basketball players, as he earned all-Three Rivers League first-team honors during the revised 2021 spring season, when he played at guard for the Timberwolves.

In addition to his clutch performance against Silverton, Ross also rushed for 148 yards in Tualatin’s win at Menlo-Atherton.

And Ross is looking for big things for the Tualatin football team this season.

“I think we have a great chance to go undefeated,” he said. “If we practice like we did (the week before the Silverton game), and it shows up here, then we won’t go undefeated.”

No matter what, Ross seems to be enjoying every minute of his senior football season at Tualatin.

“Man, it was fun. Being out here, with Friday Night Lights, it feels like we’re getting back to normal,” he said. “It’s back. As long as we can get a big crowd in here and have normal conversations like this, without being six feet apart, it’s just fun. A crowd is a big part of it. Making big plays is fun, but I’m just glad we’re getting life back to normal. It’s so much fun having a big crowd.”