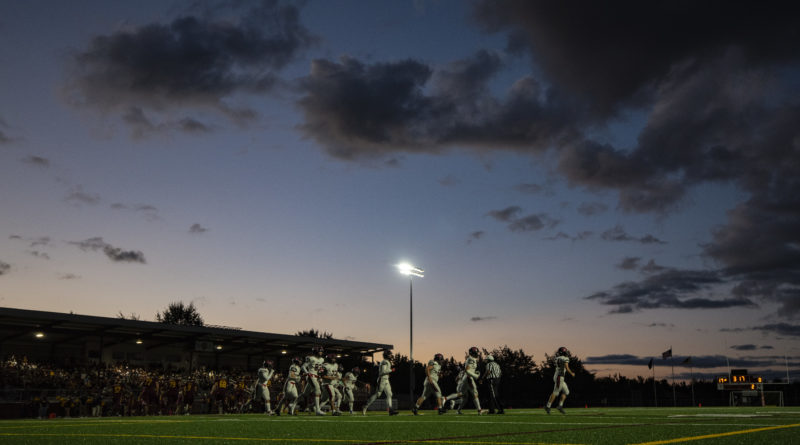 Here’s what stood out during the second weekend of action.

The Roseburg football team hasn’t posted a winning season since 2013, but a 2-0 start courtesy of a 37-7 road victory over Mountain View in Bend has the Indians well on their way to breaking that streak.

They’ve already doubled their win total from the spring season, when the Indians went 1-4, losing to four Southern Oregon opponents by a combined 150-27.

So, what has been the difference? Nothing special, said sixth-year coach Dave Heuberger.

“Same Roseburg kids playing relentless football,” he said. “Just have some size and speed to go with it now.”

Two additions who have made a difference have been senior quarterback Colton Marsters and sophomore running back Cayden Eckel, both first-year starters who have given the offense a boost.

Marsters did not play football until the spring season and wasn’t a quarterback until the summer but quickly won over Heuberger with his athleticism and potential at the position.

Eckel has been a pleasant surprise, running for six touchdowns through two games.

On defense, outside linebackers Dawson Gillespie and Logan Klopfenstein “are playing fast and taking on leadership roles,” Heuberger said, while senior lineman Silas Kincaid “has been all over the field on both sides of the ball.”

Can Roseburg ride this momentum to reach the playoffs for the first time since 2014? After all, the Indians also started the 2019 season 2-0, then followed with seven consecutive losses.

They have winnable nonconference games at Southridge (0-2) this week and home against McMinnville (1-1) before opening Southwest Conference play against North Medford.

“We need to stay healthy and continue to get better Monday through Thursday,” Heuberger said.

So far, through two games, Liberty has reveled in having been overlooked in the preseason.

The Falcons romped to their second straight win and posted a second consecutive shutout in the process,

This time, it was Lincoln that was the victim of a 52-0 thrashing, with the Falcons scoring not only on their first three possessions, but their first three snaps from scrimmage as third-year starting quarterback Hiro Diamond continued to spread the ball around — his eight touchdown passes this season have been to five different receivers.

In the Falcons’ 17-year history, they had never posted shutouts in back-to-back games and had only five shutouts all-time coming into the season, but coach Eric Mahlum isn’t surprised by how well the defense has performed, including six interceptions.

“What has keyed our defense so far is our players’ commitment to preparation and their physical play,” Mahlum said. “Our guys up front are big and physical, while our linebackers and backs are fast and physical. Our defensive coordinator (Eric Givens) has retooled some things to adjust to the players we have.”

Those players include senior linebacker Parker Treloar, who leads the team in tackles, and defensive linemen Ryan Berger and George Lyman, who Mahlum described as “big, relentless players who are causing problems for opposing teams.”

Setting the tone is senior Ethan Jones in the secondary, whom Mahlum considers the team’s most physical player, while junior linebacker Nate Smith has been like another coach on the field, “making all our defensive calls on the field and doing a great job making sure we are in the right defense every play.”

Next, the Falcons will try for a victory Friday at Lakeridge, also 2-0 and clicking on all cylinders offensively under second-year coach Spencer Phillips.

“We’re going to face a lot of great teams this season, and we just have to keep getting better each week,” Mahlum said. “I love our guys, and if our players continue to put in the work they have so far, which I know they will, good things will continue to happen.”

The origin of one of Oregon’s oldest, yet newest, rivalry games comes from our social media age.

In 2013, then-McMinnville junior Bryce Clinton posted what seemed like an innocuous jab via Twitter at the Forest Grove football team.

“Mac will not win the Friday spotlight on KGW because no one in Forest Grove owns a phone or computer. They use messenger pigeons. #fact,” Clinton wrote.

The quote served to motivate the Vikings, who won 43-34 to end a two-year losing streak in a rivalry that dates to 1911, and birthed the Pigeon Bowl. The following year, athletic director Doug Thompson and then-coach Dwight Jensen teamed with PA announcer Quinn Johnson to create a trophy that now goes to the winner.

After a two-year hiatus brought about in part when Forest Grove dropped to Class 5A in football in 2018, the rivalry resumed in the spring, with the Grizzlies winning 30-0.

On Friday, in the 103rd meeting between the teams, the Vikings got their revenge, returning the trophy to Forest Grove with a 24-21 victory.

While McMinnville still leads the all-time series 60-39-4, the Vikings could celebrate under first-year coach Dominic Ferraro, who has the team 2-0 for the first time since 2013 after its first Pigeon Bowl victory since 2015.

“I’m proud of the kids,” said Ferraro, a former Sunset assistant who installed the spread offense this season. “They’re buying into the program, how we act, how we behave, how we practice. On the field, we look like a team that’s in their first year of learning new schemes, but the thing I’ve been the most excited about is the effort they give. It’s nonstop.”

It might be Week 2, but Estacada coach Andy Mott understood the significance of his team’s 33-7 victory over Banks.

“I consider Banks one of the top programs in 4A football year in and year out,” Mott said of the 2018 state champions. “Getting a big win like this, especially early in the season, gives our team a lot of confidence, knowing that we are ready to compete with other teams at the top of that level.”

The Rangers haven’t reached the state championship game since 1953, last getting to the semifinals in 2010. They’ve won only one playoff game since, but led by physical offensive and defensive lines manned by the same group of players — Cody White, Dominic Nacoste, Mariano Martinez, Devin Gotchall, Andrew Turner and Mark Youngberg — they amassed 378 rushing yards while limiting Banks to 30.

“Our entire offensive and defensive line were the stars of the game,” Mott said. “They paved the way on offense and didn’t allow much on the ground while they kept pressure on the Banks quarterback (Cooper Gobel) all night.”

Gobel’s counterpart, Estacada junior Cory James, attempted only five passes while directing the Rangers’ veer offense, but one was a 17-yard completion on fourth-and-six that set up the first touchdown. James split time with Isaiah Schaffer during the spring season, gaining valuable experience that Mott said has served as a springboard to a solid start to the fall campaign.

“He is getting better each week at making the right reads and taking what the defense gives him,” Mott said. “He’s also growing in the passing game as well and completed some big passes for us along with making some explosive plays with his feet.”

Whether it’s simply coincidence or becoming a pattern, Friday’s game also highlighted Banks’ struggles with power-running veer attacks. In the spring, Banks fell 38-0 to eventual 4A champion Mazama, allowing more than 370 yards of total offense to the Vikings.

West Linn and Sunset tuned up for their showdown this week with big home victories. The Lions took down North Medford 49-7, while the Apollos opened Metro League play with a 45-7 victory over Southridge. West Linn and Sunset both went 6-0 in the spring and were considered the consensus top two teams in Class 6A. … Jesuit not only avoided its first 0-2 start since 2014 with a 17-7 home victory over Tigard, the Crusaders might have found their next running back star. Junior Payton Roth ran for a game-high 128 yards on 11 carries, including a 73-yarder for a touchdown, after getting just one carry in their Week 1 loss to West Linn. … Heppner notched its 20th consecutive win, dating to the start of its 2019 Class 2A state championship season, rallying to defeat Warrenton 15-12. Landon Mitchell, who’s taken over at quarterback from Jayden Wilson (Western Oregon), threw a go-ahead 14-yard pass to Kason Cimmyotti with 1:52 remaining.