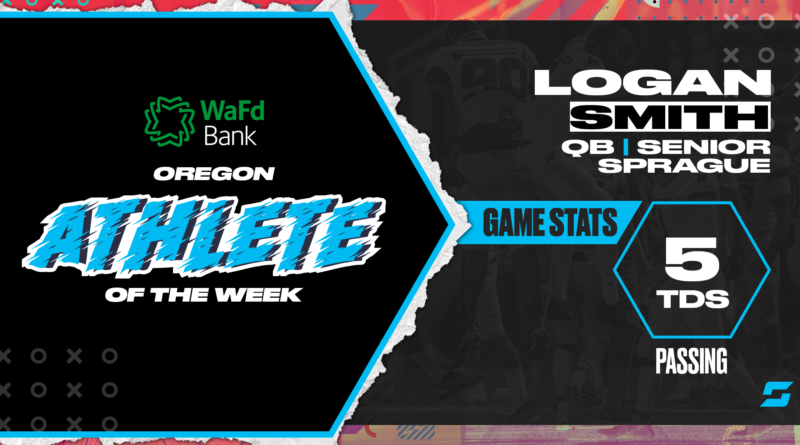 The senior fired five touchdown passes in the Olympians’ 41-20 win against Corvallis.

Smith received 47.2% of the vote, beating out McDaniel’s James Bell who finished second with 33.83%. Canby’s Matthew Soles finished third with 11.54% and North Salem’s Jerrik Wangler finished fourth with 3.93%. There were over 30,000 votes tallied this week!

James Bell, McDaniel football: Bell had touchdown runs of 22, 33 and 25 yards and passed for more than 250 yards as the Mountain Lions defeated Fort Vancouver, 56-12.

Will Dau, Churchill football: Dau had two of the Lancers’ five interceptions in their season-opening 35-28 win against Eagle Point.

Royce Fasel, Glencoe football: Fasel ran 29 times for 273 yards and three touchdowns and was 2 of 5 passing for 95 yards — including an 80-yard touchdown to Zack Schlottmann — in the Crimson Tide’s 36-29 loss to Sheldon. Fasel also made 10 tackles on defense.

Kyrin Fuimaono, McKay football: Fuimaono completed 21 of 34 passes for 283 yards and three touchdowns in leading the Scots to a 25-21 win against Putnam.

Chase Harmon, West Linn football: The first-year starting quarterback had an impressive debut, passing for 226 yards and two touchdowns as the Lions took down Jesuit, 17-3. He completed 18 of 23 passes. (Story, photos)

Caleb Kim, Sunset football: Kim had three touchdown runs and an interception in the Apollos’ 48-6 rout of Tigard. He finished with 107 yards rushing. (Story, photos)

Taylor Krueger, Jesuit girls soccer: Krueger had three goals in the Crusaders’ 6-0 win over Sherwood in an opening-week showdown between two of the top girls soccer programs in Oregon. (Photos)

Caden Lasater, Crater football: Lasater returned one of his two interceptions 90 yards for a touchdown, caught a touchdown pass and rushed for more than 100 yards to help the Comets cruise past North Bend, 31-0.

Jack Layne, Lake Oswego football: On an emotional night in which the school honored late coach Brian Bartsch, Layne passed for four touchdowns to power the Lakers to a convincing 40-7 win over Mountainside. (Photos)

Shinjiro Metzger, Sunset boys soccer: Metzger scored two goals, including the game-winner with less than 6 minutes left, to lead the Apollos to a season-opening 4-3 win over Franklin, the 2019 Class 6A state champion. (Story)

Chase Nelson, Central football: Nelson passed for 283 yards and four touchdowns in a 40-24 victory over Redmond.

Matthew Soles, Canby football: Soles had a touchdown and two interceptions in the first half of the Cougars’ 26-20 victory against Dallas.

Brock Thomas, Sheldon football: Thomas carried 17 times for 150 yards and three touchdowns and was 16 of 26 passing for 247 yards and two scores in the Irish’s 36-29 win over Glencoe.

Stryder Todd-Fields, Central Catholic football: Todd-Fields returned the opening kickoff 98 yards for a touchdown — the first of his two scores — to send the Rams on their way to a 28-7 win over Camas. (Story, photos)