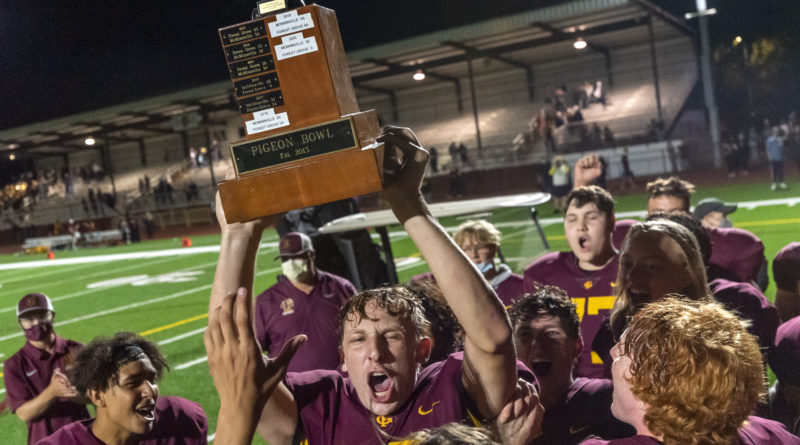 FOREST GROVE — The Pigeon Bowl trophy is back in Forest Grove after the Vikings defeated McMinnville 24-21 on Friday night.

Five months ago, in the sixth playing of the Pigeon Bowl, McMinnville’s 30-0 win was just another shutout loss in a winless season for Forest Grove. But with a new coach in former Sunset assistant Dominic Ferraro, the Vikings are 2-0 for the first time since 2013. That’s also the year the rivalry matchup became known as the Pigeon Bowl thanks to a humorous tweet by then-McMinnville student Bryce Clinton.

“I’m proud of the kids,” Ferraro said. “They’re buying into the program, how we act, how we behave, how we practice.”

“We didn’t score a touchdown until our third game,” Johnson recalled.

Forest Grove nearly opened Friday’s game with a touchdown — Johnson appeared to take the opening kickoff down the sideline for a score, but a referee said he stepped out at the 38. After a failed fourth-down attempt and a McMinnville punt, Vikings sophomore quarterback Kaden Hale connected with senior receiver Trevor Cannon for a 25-yard touchdown.

That score was one of three first-half touchdowns for the Vikings, who stretched their lead to 24-0 on Johnson’s interception-return touchdown and appeared on their way to a rout.

But the Forest Grove lead grew much narrower in the second half. McMinnville found more success on the ground and the Vikings struggled to run the ball.

“It makes sense,” Ferraro said. “I think only one of our offensive linemen started a game last year. Four new offensive linemen, they struggled through some stuff. We also were not being as aggressive as we could have been, and that’s my fault. (McMinnville) did a great job, they started to run the ball, started to mix things up, made some second-half adjustments and we started getting tired.”

“Our defense was on the field a lot,” he added.

McMinnville scored 21 unanswered points in the second half, but Grizzlies senior Ky Hoskinson couldn’t connect with sophomore Gabe Blanco on a critical fourth-and-18 late in the fourth quarter and Forest Grove was able to run out the clock.

“We have a ways to go,” Ferraro said. “On the football field we look like a team that’s in their first year of learning new schemes. We make a lot of mistakes, but the thing I’ve been the most excited about is the effort they give. It’s nonstop.”

Johnson said the team needs to work on maintaining its energy level.

“As you saw, it was pretty big in the first half, but we kind of died out there,” he said. “We’re kind of a small team for such a big school. We need to condition and keep in shape to stay out there.”

“It’d be nice to have about 8 to 10 more kids, freshmen through seniors — that would help us out tremendously,” he said. “We’ve got a lot of guys going both ways, which lends itself to us getting tired in the second half. School was in session today and I was walking around and there’s kids in the hallways — you just gotta build some excitement so the kids come out.”

“It’s been over there (at McMinnville) for a while and we got it back,” he said.

“All through the state there’s rivals and McMinnville’s one that is our rival, so we want to make sure we’re always up for the game,” Ferraro said. “You want to represent the program the best you can.”