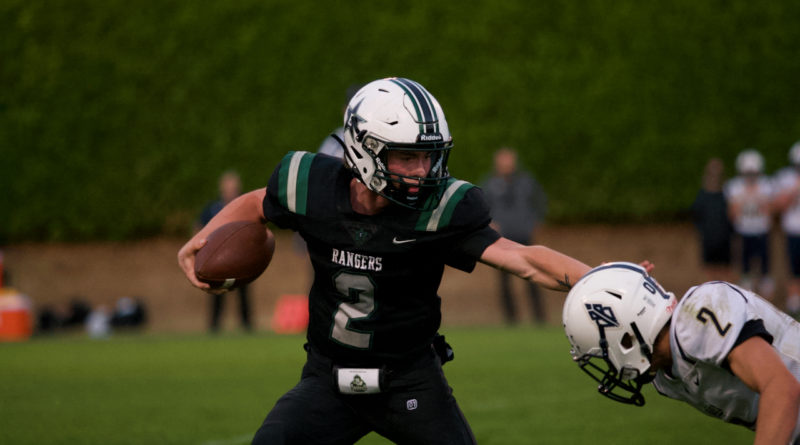 ESTACADA — The Estacada Rangers pushed and shoved their way to a convincing 33-7 home win over Banks in a battle of Class 4A contenders Friday night.

The Rangers dominated up front throughout the game, setting the stage for their power running game to take control.

Estacada took a 21-0 lead late in the first half when Waylon Riedel gained 31 yards on three consecutive carries, setting up a short touchdown plunge by backfield mate Jake Behrman.

“We knew we were the bigger, stronger team, and we just took it to them,” Rangers quarterback Cory James said.

“That was the game plan all week,” Estacada coach Andy Mott said. “We felt that we could do some things on the ground. We found what we were looking for and we were able to exploit it through the whole game.”

Banks gave itself a boost before halftime when senior receiver Hunter Smith got behind the defense and made a one-handed, diving catch down the sideline for a 36-yard gain on third-and-10.

“Every time we ran that set of routes in the first quarter, my guy would jump down to cover (tight end) Charlie White, so I told Cooper (Gobel) to give it a pump and I would be wide open deep,” Smith said. “It worked out, and it felt good to get some points up — it helped our confidence.”

Two plays later, Gobel fired a short dump pass over the middle that found White for Banks’ only score of the night.

Banks got another spark by returning the second-half kickoff into Estacada territory, but any plans to make it a game were spoiled when linebacker Riedel came untouched around the right side and sacked Gobel on third-and-4.

“Coach called a stunt, and I just filled the hole and did my job,” Riedel said. “We turned things around and got physical.”

“We needed to get a stop right there,” Mott said. “If Banks gets it to a 21-14 score, then we find ourselves back in a tight ballgame.”

Braves punter Wyatt Hesselman pinned Estacada at its 5-yard line, but it would not matter.

The Rangers immediately escaped the shadow of their end zone when James burst through the middle for a first down, then hopped out of an ankle tackle and picked up another chunk down the sideline for a 37-yard gain.

Estacada would march 95 yards in 10 plays, capped by a 2-yard plunge by Riedel for his second score of the night and a 27-7 lead.

“We wanted to use some clock and put some more points on the board,” Mott said. “With our style of play, it wears on a defense as the game goes on.”

Banks put together one last threat after Jamar Flippen hauled in a 19-yard catch and Gobel scrambled for 16 yards on third-and-10. Banks eventually found itself with first-and-goal from the 1-yard line.

Estacada’s defense answered the challenge, hitting ball carriers in the backfield on consecutive plays, followed by a dropped pass in the end zone. The Rangers broke through for a sack on fourth down to complete the stand.

“We knew they were a good team, and they wouldn’t let up,” James said. “We had to keep doing our stuff, knowing they would break, and you could see that happen in the fourth quarter.”

Friday’s game was a 4A blockbuster — one of these programs has reached the state semifinals in four of the past five postseasons.

“Banks is a powerhouse in 4A, so winning a big one like this is a huge step forward for our program,” Mott said.

Estacada (2-0) has another big one next Friday when it plays host to a Seaside squad that has outscored its first two opponents 103-0. Banks (1-1) will travel to Hidden Valley.

Banks had a chance to take an early lead Friday when Flippen intercepted a tipped ball and had nothing but green in front of him only to have a whistle kill the play. Banks coach Cole Linehan came off the sideline with hands outstretched demanding an explanation for the stoppage that likely prevented Flippen from converting a pick-six.

“It was a clear interception with an inadvertent whistle that stopped things,” Mott said. “Getting a stop and not letting them score first was huge.”

The interception was upheld, giving Banks the ball at midfield. But the drive ended with a 33-yard field goal try going wide left.

Estacada took possession and went 80 yards in 13 plays to gain a lead it would not surrender. The Rangers kept the drive alive when James fit a tight pass between three defenders to Hunter McDonald for 15 yards on fourth-and-7.  On the next play, James took a keeper through the middle and reached the ball out in front of him to break the plane of the goal line for the game’s first score.

A few plays later, Estacada’s Andrew Turner broke through the line and was in the process of throwing Flippen to the turf when the Banks running back flung the ball forward hoping for an incomplete pass. Instead, McDonald came sliding on his knees for the interception.

The Rangers converted the takeaway into points when Riedel crashed over the goal line from 2 yards on fourth down to put Estacada in charge 13-0.