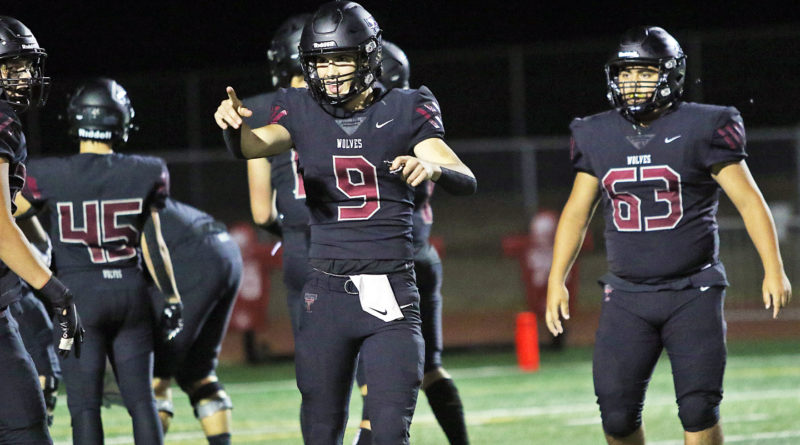 It looked to be a battle between one of the top teams in the Class 6A ranks and one of the powerhouses at the Class 5A level.

It turned out just that — a battle.

And what a battle it was.

It was a battle that saw the Tualatin football team get off to a roaring start, only to have to fight off a furious Silverton rally in a contest that wasn’t decided until Timberwolves senior Malik Ross came up with a diving interception on the 1-yard line with 30 seconds left.

Ross’ clutch defensive play helped the Timberwolves hold on for a 35-28 win over the Foxes in a wild, thrilling nonleague battle between two of the state’s top squads Friday at Tualatin High School.

“It was a tough one,” said Tualatin senior receiver Peter Burke, who had a touchdown catch and a 2-point conversion catch. “We started hot, but they came back. They’re a great team, with some great athletes. We were lucky. And Malik Ross — yeah, obviously, he stepped up big and pulled it out for us.”

“It was big,” said Ross, who also had an 86-yard kickoff return for a touchdown and a 63-yard run for another score. “The best thing about this is that we won, and we’re also going to learn from it.”

Tualatin, which entered as the No. 1 team in the SBLive Oregon Class 6A media poll, improved to 2-0. Maybe more important to the Timberwolves is that they might have learned a valuable lesson, one that could help them down the road this season.

“We have to learn that no matter how much we’re up, we have to keep going,” Burke said. “You can’t take your foot off the gas, especially with a team like that, and a quarterback (Jordan McCarty) like that. He was great.”

Silverton, which entered No. 2 in the SBLive Oregon Class 5A media poll, moved to 1-1.

“It went alright,” said McCarty, a senior who had a spectacular performance, throwing for 355 yards and running for 65. “We went down early, but I’m proud of my team for battling back. We never stopped going. We didn’t come out with the win, but it was a good battle for us.”

“We were ready. We came out and tried to do our best,” said Silverton junior Jackson Pfeifer, who rushed for 119 yards and had a sack. “We had a few mistakes at the beginning of the game. That probably cost us, but we battled back in the end, and we almost had it.”

Ross helped get Tualatin off to a fast start. On the opening kickoff, Ross, fielding the ball after it bounced off the turn, burst through a hole in the middle, cut to his right and sprinted down the sideline for an 86-yard touchdown.

“Oh man, I have to credit our blockers. There was a great hole,” Ross said. “We work on that a lot in practice, and we finally got it. The blocking part is just as important as me running, and I have to give credit to them. And on my part, it was pretty good, I think.”

The Tualatin offense then got into the act. On the team’s first drive, the Timberwolves moved 88 yards in nine plays. A 20-yard run by Ross and passes of 17 yards from senior quarterback Jackson Jones to senior receiver Kellen Hale and 29 yards from Jones to senior receiver Cole Prusia set up a 6-yard play-action touchdown pass from Jones to Burke, making the score 14-0 with 1:14 left in the first quarter.

Prusia played a big part in Tualatin’s next scoring drive. First, he threw a 29-yard pass to Burke coming off a reverse. Four plays later, he caught a 16-yard scoring toss from Jones, making it 21-0 with 7:26 to play in the second quarter.

All of a sudden, it looked like the anticipated battle might not be much of a battle at all.

“We felt real good. We were up three (touchdowns),” Burke said. “We felt like we could keep rolling through it, but they’re a great team and fought back. They took us by surprise.”

The Foxes say they weren’t surprised at all.

“We kept the same mindset. We knew we had it in us,” McCarty said. “We had some good drives but just couldn’t punch it in.”

“We just wanted to battle back and do our best, and keep going,” Pfeifer said. “We wanted it. We never quit.”

The Foxes tried to get their rally started before halftime. A 59-yard pass from McCarty to senior Vandon Fessler moved Silverton deep into Tualatin territory as the second quarter entered its final minute. But with 8 seconds before halftime, Prusia intercepted a fourth-and-goal pass in the end zone, ending the threat and preserving the Timberwolves’ 21-0 lead going to the intermission.

Silverton wouldn’t be denied in the third quarter. Pfeifer broke free for a 39-yard scoring run, trimming the Tualatin lead to 21-7 with 7:45 left in the period.

It took just four plays for the Timberwolves to answer. Junior Jack Wagner, who took over quarterback duties in the second half with Jones out of action with what appeared to be a shoulder injury, ran 49 yards up the middle for a touchdown, which made the score 27-7 with 6:15 remaining in the third quarter.

Silverton cut into the lead again, as McCarty threw a 16-yard scoring pass to Fessler with 21 seconds left in the period, making the score 27-14 going to the fourth quarter.

That’s where things really got interesting.

With the Foxes still trailing by 13 and facing fourth-and-17 from the Tualatin 42-yard line, McCarty found Pfeifer sprinting on his own down the left sideline for a 42-yard touchdown pass, which made the score 27-21 with 7:15 remaining.

“Jordan called it, and we knew it was going to be a good play,” Pfeifer said. “I was just wide open on that wheel (route). That felt great.”

With momentum now clearly on Silverton’s side, Tualatin needed a big play — and the Timberwolves knew just where to get it.

Ross, getting the ball on a handoff, broke into the clear and sprinted 63 yards for a touchdown.

A 2-point conversion pass from Wagner to Burke gave the Timberwolves a 35-21 lead with 4:07 left.

As it turned out, that lead was anything but safe.

“All of our guys are just scrappers,” McCarty said. “We know we’re good, and we’re never going to stop playing our game.”

The Silverton defense, getting a key tackle for a loss by senior Austin Ratliff, forced Tualatin into a three-and-out, and the Foxes got the ball back on their 29-yard line with 1:02 to play. From there, a 39-yard pass from McCarty to Fessler, a pass interference call on Tualatin and an 11-yard run by McCarty moved the ball to the Tualatin 9-yard line with 35 seconds remaining.

On the next play, Ross made a diving interception at the 1-yard line in the middle of the field, grabbing the ball right before it hit the turf.

“I read it, and I got the pick. And, man, I’m so glad I did, because that helped us come out with a win,” Ross said. “I’d say the ball was a couple inches off the ground. I thought they may rule it incomplete, because I don’t know if the ref had a good angle. Wherever that ball was, I was going to dive for it. I was going to do whatever it takes to win. I dove for it. It hit right in my arms, and that’s just hard work that I do in practice, and it shows.”

With Silverton out of timeouts, Tualatin had to run just one play after the turnover, with Ross powering the ball out to the 2-yard line, leaving the Timberwolves with a hard-fought 35-28 victory.

“This was great for us,” Burke said. “This will help us a lot in the playoffs. I think they’ll probably go undefeated the rest of the season.”

“I’m just glad we won,” Ross said. “For sure, this will help us. It’s going to be a learning point for us. If you ask anybody, they’ll say we were going 80 percent in practice. Now we’re going to go 110 percent. We don’t ever want to end up on the other side.”

Jones, playing in just the first half, completed 9 of 13 pass attempts for 131 yards. Burke had three catches for 46 yards, and Prusia had two catches for 45 yards.

For Silverton, McCarty completed 20 of 42 pass attempts for 355 yards and two scores. He ran for 65 yards and another touchdown on 15 carries.

“Hopefully, this will open some eyes that we’re a legit team. All the guys have worked super hard. We worked hard all summer leading up to this,” McCarty said. “This will make us better. Playing good teams like this early is a good thing. We’re going to go back to the drawing board a little bit and keep improving.”

Fessler was Silverton’s top receiver with 10 catches for 165 yards. Ratliff had four receptions for 81 yards.

Pfeifer led the rushing attack with 119 yards on 20 carries.

“We have the potential to make it all the way in 5A,” Pfeifer said. “This is probably the best team we’ll play.”

For the Silverton defense, senior Keegan Walter and Pfeifer each had a sack. Schaffers and Ratliff each had a tackle for a loss.

“This was fun, battling with my brothers,” McCarty said. “It was awesome.”

The Foxes next will be in action Sept. 17, when they play host to South Albany in a Mid-Willamette Conference opener at 7 p.m.

Tualatin will travel to Aloha on Sept. 17 for a nonleague game at 7 p.m.