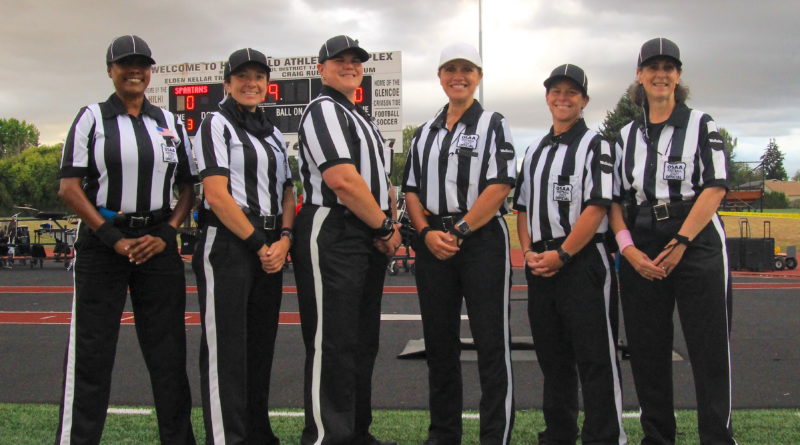 A little history was made Friday night at Hare Field in Hillsboro when Glencoe defeated Hillsboro 35-0 in a nonleague game.

For what is believed to be the first time in an Oregon high school varsity football game, an all-female officiating crew worked the game, with three members of the Portland Football Officials Association (PFOA) working alongside three college officials on a six-woman crew.

Pistone is on staff with the Missouri Valley Conference (FBS), while Bly works junior college ball in Southern California. Harvill, Fisher and Brisson are members of the PFOA, with Brisson already having made history as the first woman to work an OSAA state championship game as the head linesperson at the 2018 Class 4A state final.

“It was an honor and an incredible opportunity to be part of history,” Brisson said Sunday evening. “The crew jelled quickly, and we just went right into what we had to do. The game was fun, and the crew was amazing. It was great to be able to learn some new tricks and keys from college officials. I hope we can do it again soon.”

Fisher has worked several OSAA playoff games, including a 2018 Class 5A semifinal between Thurston and Pendleton. Harvill, in her fourth year in the PFOA, is an up-and-comer in the association.

Glencoe coach Ian Reynoso was unaware until the crew arrived at Hare Field that his team would be part of a history-making game, but he instantly understood the significance of the moment.

“The football community has really been pushing for girls and women to be involved in football for the last few years, and to be part of that night was pretty cool,” said Reynoso, who previously coached the line for the Portland Shockwave women’s football team, for whom his wife, Elisa Crumley (an All-American javelin thrower at the University of Oregon), played running back and free safety.

“There are so many women out there who have a passion and a desire to be involved with football. Glencoe, like a number of other schools in the area, has had girls on our varsity football team, as well as at the youth level. It is great to see the momentum beginning to pick up.”

Reynoso has had Brisson and Fisher work games for him over the past decade at Glencoe, but the other four members were new to him. He especially appreciated how Conti communicated during the game whenever he had a question regarding a call.

“Some of the crew seemed a bit nervous, but I feel with the weight of the moment, that was to be expected,” Reynoso said.

He also recognized that with Oregon, like every other state, facing a shortage of officials, this “pretty special moment for the state” hopefully brings more women into the officiating ranks.

“There has been such a shortage of officials in football over the last few years, we have made it a point to thank the crews every week for working our games and providing us the opportunity to play,” Reynoso said. “Kudos to PFOA for building the future of officials in the state and providing opportunities for women to be involved in a game they love.”