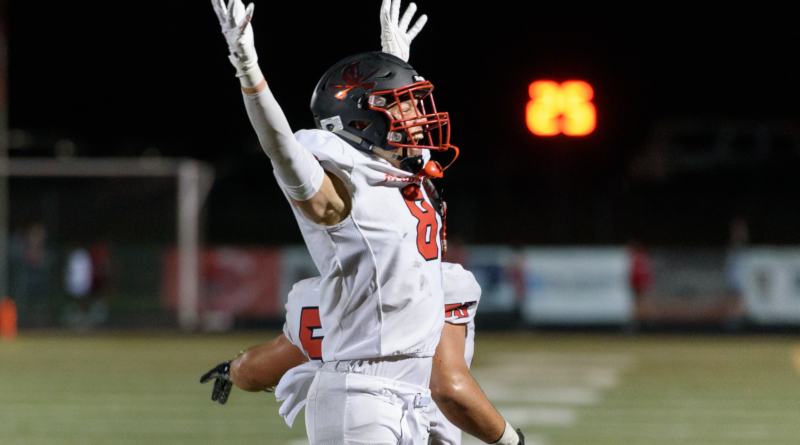 The Clackamas football team was in desperate need of a pick-me-up in the second quarter of its season opener Friday night at Camas.

Enter Miles Williams to jolt the Cavaliers back to life.

“I’m a playmaker. That’s what I am,” the junior receiver proclaimed after producing two big plays in a 90-second span that shook them out of their doldrums, then later making a sideline catch that set up Luke Ash’s go-ahead touchdown late in the third quarter as No. 6 Clackamas knocked off the Papermakers 38-30 at Doc Harris Stadium.

With Clackamas trailing 17-7 and facing third-and-13 from its 39-yard line, about to give the ball back to a red-hot Camas offense, Williams got behind three defenders and hauled in a moon shot from Blake Baker, shook off one defender at the Camas 15 and streaked into the end zone for a 61-yard score.

“I know Miles can make a play,” Baker said. “You’ve got to know your personnel, and Miles is the best receiver in the state. I just put it out there, and he made the play.”

The Cavaliers then forced a three-and-out, and Williams hauled in a line-drive punt off a bounce at the Clackamas 46, found a crease and jetted for a 54-yard score.

“We just needed a spark, and I gave it,” said Williams, who had four catches for 105 yards. “I had to show up and make big plays. That’s what I do.”

After the Papermakers regained the lead late in the third quarter on Luke Jamison’s second touchdown run, a 7-yarder with 4:16 left, Williams came through again, somehow tiptoeing the sideline with a defender draped on him for a 35-yard gain to the Camas 2.

Two plays later, Ash bulled into the end zone to put the Cavaliers ahead for good.

“Miles and Luke made a ton of plays at big moments of the game,” said second-year Clackamas coach James Holan. “It would have been easy after giving up two scores after scoring quick and just kind of letting that momentum get to us, but credit to these guys for believing in each other and having each other’s backs.”

Finally, Williams put a capper on his night by intercepting a fourth-down pass in the end zone with 3:43 to play and the Cavaliers nursing a 38-27 lead.

“Miles had that pick, a punt return, a touchdown catch — I mean, the guy’s just … he’s an animal,” Holan raved.

While the Papermakers eventually got within 38-30 on junior Ethan Ouchi’s third field goal of the night with 1:47 to play, Clackamas ran nearly all the remaining time off the clock after recovering the ensuing onside kickoff. One last desperation heave went for naught, allowing the Cavaliers to celebrate a hard-fought opening victory after having to sit Week 1 when their opponent, Gresham, had to go into COVID quarantine.

“It was tough last week, practicing without a game plan,” Williams said. “This is a great Camas program, obviously. We had a great week executing our game plan, and it paid off tonight.”

This great Camas program now sits 0-2 for the first time since 1997, when the Papermakers were amidst a 21-game losing streak. They’re nowhere near that level of futility, but after twice watching leads slip away from them, they’re left searching for answers with another traditional Oregon powerhouse in Jesuit coming to Doc Harris next Friday.

“None of us want to lose,” said senior Jairus Phillips, who ran for a touchdown and had a game-high 11 tackles. “I think we’re going to be fine. I believe in our team and the players we have. We’ve got to make some things change, but we have what it takes to get it done.”

The Papermakers showed improvement from their Week 1 defeat across the river against Central Catholic in Oregon City, but as first-year coach Jack Hathaway pointed out, “we’re nowhere near where we need to be. That’s the bottom line, and our kids know that. That’s encouraging as a coach to know that our kids understand this is not where we need to be.”

For the second week in a row, the Papermakers saw an opponent get big plays in the passing game and on special teams, a fact that gnawed on Hathaway afterward.

“These games are decided by a few plays here and there, and they happened to make more of them,” he said. “We gained experience off that and learned from that. We’re going to be the team that makes those plays at the end of the year.”

Friday marked the debut of Baker, a junior, as Clackamas’ starter at quarterback, and he wasn’t fazed by the moment. He led a blitzkrieg opening drive that ended with him finding a wide-open KJ Johnson-Gibson, who’d beaten the corner at the line, for a 35-yard touchdown.

The Cavaliers then bogged down for several possessions before Baker dropped his pass into Williams’ hands to get them back on track. He led three scoring drives in the second half and finished 14 of 19 for 235 yards, two touchdowns and no interceptions as Clackamas went without a turnover.

“It was our first game and Camas’ second, so we just had to get into the feel of things,” Baker said. “Once we got into the second half, we played a lot better.”

The Cavaliers defense, meanwhile, bent several times but produced enough big plays to stymie the Papermakers in the red zone. Noah Preuitt’s sack on third-and-goal from the 8 led to Ouchi’s first field goal, and Ben Moffett broke up a pass in the end zone just before halftime.

“Early on, we were getting kind of lost in some of our own stuff, and we finally decided that we needed to pin our ears back and get after them a little bit,” Holan said. “We got a feel for what they wanted to do, and again, credit our guys. They came to play.”