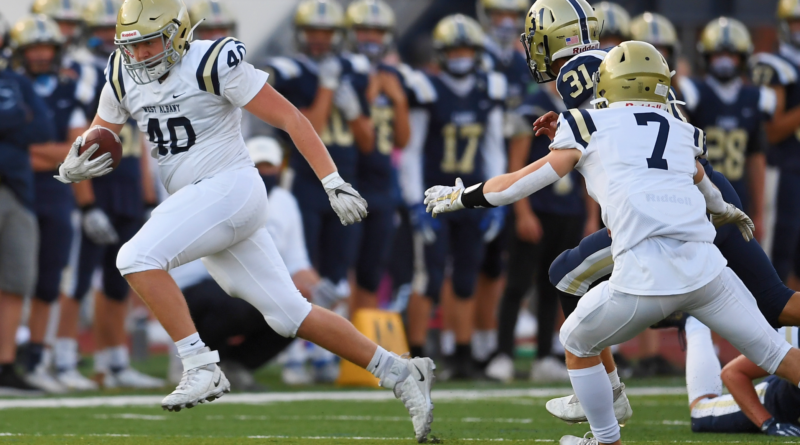 CANBY — For those at West Albany, there’s a lot to prove entering this season.

The program reached the state semifinals in 2018 and 2019, then saw a potentially special season get wiped away last year because of COVID-19 before going 4-1 in the spring.

The Bulldogs’ goal has always been returning to the top, and that hasn’t changed.

“It’s a whole community of West Albany playing football, and it’s a big deal to everybody,” senior quarterback Michael Cale said. “Last year, we showed what we can do, and this year we’re showing what we can do. I think anyone who’s not betting on us is betting wrong.”

No. 4 West Albany overcame another big early-season test, traveling north and escaping with a 17-14 victory over No. 5 Canby in a Class 5A nonleague showdown Friday night at Canby High School.

West Albany coach Brian Mehl said there’s “always” high expectations associated with the program, but the Bulldogs continually believe in themselves every fall.

“I think we get recognition based on our name,” Mehl said. “But we’re not successful based on a five-game season in the spring — nobody cares about that. We’re still figuring out what type of team we have. We’re playing solid football right now, but I think in four to six weeks, we can be a really, really solid ballclub.”

The Bulldogs faced adversity early when they lost starting running back Marcus Allen, who rushed for 110 yards last week in a win over Beaverton, to a leg injury midway through the first quarter. West Albany had to ride Cale’s arm the rest of the way while depending on sophomore running back Anthony Vestal, who hadn’t played one down of varsity football before Friday. He finished with 12 carries for 40 yards.

Mehl said Allen’s absence changed things “dramatically,” as they had to figure it out offensively.

“We knew it was going to be a struggle the moment Marcus went down,” Mehl said. “It was going to take a special effort for us to somehow get the ball in the end zone, and we barely got in.”

West Albany’s defense took care of the rest by holding Canby scoreless and to just 56 yards of offense in the second half.

The Cougars turned the ball over twice and had a potential scoring drive stalled by two big penalties late in the third quarter that had them at one time facing a 2nd-and-37 play.

Canby had one final chance for the lead and reached the Bulldogs’ 30-yard line with a minute left, but senior quarterback Mikey Gibson was intercepted by West Albany senior Bryce Bowers to end the game.

Gibson said it was a challenge all night to get anything going offensively.

“It was hard,” said Gibson, who completed 13 of 23 passes for 88 yards and a touchdown. “With their defense, they got studs all across the board. We couldn’t get it clicking and those penalties hurt us. … We just ran out of time and had to make something out of nothing.”

Canby grabbed a 14-10 lead before halftime when Gibson found senior Koby Kessler for a 13-yard touchdown with 17.2 seconds to go.

The Cougars scored on their previous drive when senior Bryce Oliver connected with Gibson on a halfback-pass trick play for a 45-yard touchdown.

Canby coach Jimmy Joyce was pleased with the way his team battled.

“I honestly think if we played them 10 times, it’d probably be 5-5,” Joyce said. “We’re trying to take the next step as a program and playing a quality team like them coming down to the wire, I’m pretty happy with the way our guys played.”

The Cougars (1-1) are looking to regain the glory days when they were a perennial contender at Class 6A. After falling on hard times with back-to-back winless seasons, Joyce came on board in 2019 with hopes of rebuilding the program by moving to the 5A level.

The reviews have been positive so far.

“When I got here, we hadn’t won a game in almost two years,” Joyce said. “Now we’re playing a meaningful game in a top-5 matchup in the state. That’s a credit to the kids.”

Added Gibson: “We’re starting to build it back up, really trying to bring what Canby football used to be back to Canby.”

For West Albany (2-0), Cale completed 13 of 20 passes for 154 yards with a touchdown and an interception. Brock Nelson led the Bulldogs with four catches for 83 yards. Houston added three catches for 36 yards and a score.

“This is definitely a big statement for us,” Houston said. “There’s a lot of doubters coming into this season. We have a younger squad, so not too many seniors, but we’ve got good chemistry and we all work well together.

“We can’t get too ahead of ourselves. We’ve got Dallas next week at home and that’s a big week for us with the first league game, so we’ve got to go catch a ‘W.’”