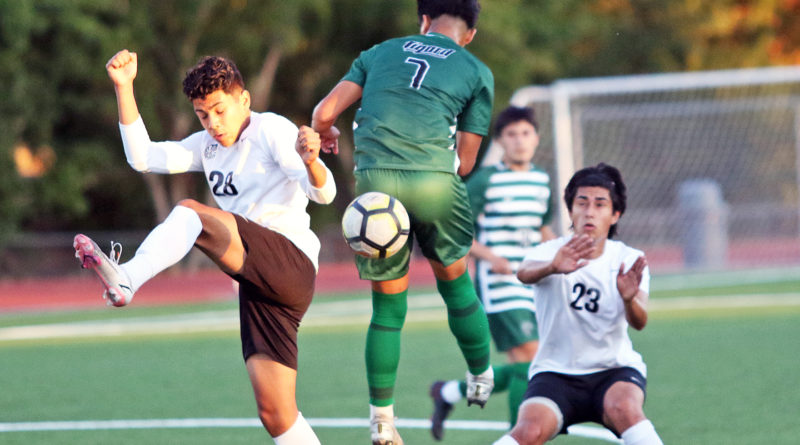 The challenge was there.

The intensity definitely was there — at an extremely high level.

The opportunity to get a big league victory, as well as school-district bragging rights, was right there as well.

And the Tualatin boys soccer team wasn’t about to let it get away.

The Timberwolves, striking early and then fighting off a second-half Tigard rally attempt, battled their way to a 3-1 win over the rival Tigers in a spirited Three Rivers League-opening match, played Wednesday at Tigard High School.

“It’s huge. Going away, and winning, it’s what we want,” said Tualatin senior forward Ben Augee, who had two goals and an assist in the victory. “We came away with three points and three goals and we’re happy with the performance. We played well.”

“We were very fired-up tonight,” said Tualatin junior Remus Repcak, who scored the Timberwolves’ third goal. “I thought, in the first half, we had a high press, and we were unlucky not to get more than two. Their goalie (junior Donovan Villatoro) was good. We were unlucky, and he did well. Their defense threw everything they had at us. In the second half, we had that extra gear at the end.”

With the victory, Tualatin improved its season record to 2-1. But more important to the Timberwolves, they’re off to a 1-0 start in Three Rivers League play.

“We’re hoping to do really well in league,” Augee said. “I think we still have some gears to unlock. It’s still early in the season. There’s still more to come. I think we can still get some more out of this squad, and some good things are going to happen.”

“I think we definitely can go far,” Repcak said. “We definitely have a shot at the league. I think we were unlucky the last two years, to come out in second each year.”

“I think it went well for us. That one kid for them, Ben Augee, he’s really good. He’s hard to stop, but we left it all out there,” said Tigard junior Caleb Benjamin, who scored the Tigers’ goal. “We really had a lot of chances, but we couldn’t finish them off. We’re going to keep trying to win the league. Even if we don’t, I know we’re going to make a good run.”

The visiting Timberwolves looked to be playing with plenty of motivation early in the contest between the rivals. Repcak had two shots at the Tigard goal in the first eight minutes. On the other end of the field, Tualatin junior Cesar Jacintos leaped high in the air in the box to head away a free-kick shot by Tigard senior Brandon Mendez Hernandez.

Soon after, the Timberwolves, and Augee, broke through. Taking the ball out of a scramble, Augee maneuvered his way to the right side of the field and, from 17 yards out, fired a shot that found its way into the Tigard goal, giving Tualatin a 1-0 lead with 29 minutes and 55 seconds left in the first half.

“The first one, it was a little bit of luck. I hit it off a defender,” Augee said. “I just ran through it and hammered it on the ground. That felt great. It was awesome.”

A short time later, Augee struck again. Tualatin junior Angel Ramos started the scoring play, knocking the ball to the middle of the field from the right side. Augee took over from there. Taking control of the ball from about 20 yards away and after getting past a defender, he rifled a low, line-drive shot inside the right post of the Tigers goal, giving the Timberwolves a 2-0 lead with 24:47 before halftime.

“I was waiting, poaching outside the 18, and I just hammered it home,” Augee said.

Tualatin kept trying to add to its lead before the intermission, getting shots on goal from Repcak, Augee and Ramos, but Villatoro made diving saves on all three of those attempts.

But the Timberwolves defense, including junior Axel De La Toore, senior Cristian Sandobal, junior Cole Hexum and junior Leo Fulcher, among others, was also up to the task. Tigard got just three shots on goal — by senior Adam Miller, Hernandez and senior Jessie Covarrubias — in the first half, with Tualatin junior goalkeeper Jack Vohland making saves on all three of those attempts, preserving the Timberwolves’ 2-0 lead going to the intermission.

Villatoro helped keep the Tigers within striking distance early in the second half, as he made diving deflections on shots by Augee and Repcak.

Soon after, Benjamin made things really interesting. After Hernandez knocked the ball to the middle of the field, the right-footed Benjamin, in the right place at the right time, came up with a spectacular, spinning, left-footed kick from 20 yards, bending the ball inside the left post of the Tualatin goal, cutting the Timberwolves’ lead to 2-1 with 19:52 left in the match.

“I don’t know. The ball just kind of appeared. It set in front of me, and I was like, ‘Why not? I’ll just hit it,’” Benjamin said. “It felt awesome. I’m going to try to keep that up and hit more of those.”

From there, the Tigers battled as they tried to get the equalizer. Tigard got shots on goal from Hernandez and Miller in the final 12 minutes, but sophomore Jared Villa-Rosales, who played the second half in goal for Tualatin, made the save on both of those shots.

Tualatin didn’t let up, either. Augee came close to getting a hat trick, as his shot coming with 7:57 to play clanked off the right post of the Tigard goal. Repcak had a shot skim off the crossbar of the Tigard goal and then sail out of bounds.

With less than a minute to play, Tualatin was able to convert. Augee, driving with the ball on the left side of the field, pulled up and fired a cross to Repcak near the center of the pitch. Repcak blasted a shot from 17 yards into the left side of the Tigard goal, making the score 3-1 with 51.2 seconds remaining.

“I saw Ben running down the left. I trust him to take the shot if he’s got it, but I just want to give him a second option,” Repcak said. “He found me. I was lucky to get that touch right in front of me, and I just hit it as hard as I could.”

“I took it down the left side, and I saw him open,” Augee said. “I was thinking about taking it and shooting it, but he was the better option. I hit him, and it was an amazing finish by Remus. That sealed the game.”

It certainly did, as soon the Timberwolves were celebrating a 3-1 league-opening win over their rivals.

“Yeah, definitely, there was some extra motivation tonight,” Augee said. “Playing under the lights, first game, get the nerves out, especially against Tigard. They’re a good squad. I enjoyed it.”

“This was very fun,” Repcak said. “It’s great to be out here playing again, knowing we have at least 14 games this year.”

Tualatin had 13 shots on goal and 12 corner kicks.

Tigard had seven shots on goal and three corner kicks.

“We knew going into this game that it was going to be really difficult. They’re a good team,” Benjamin said. “We knew we had to go 100 percent tonight to keep it close. It was pretty intense. Our defense was a little shaky at times. But we’re going to work on that, get it more organized.”