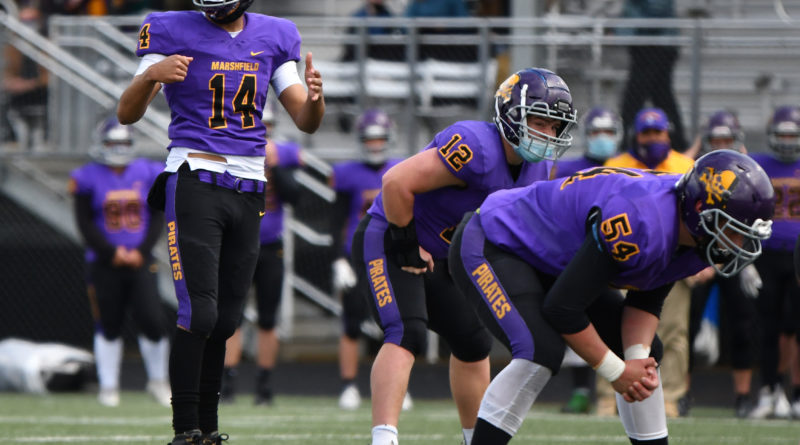 Marshfield finished the spring season with a big victory over Gladstone in the third-place game of the 4A Elite 8 Showcase yet ruing what could have been.

The Pirates met Marist Catholic the week before with a spot in the Showcase championship game on the line, with the Spartans racing away in the second half for a 39-21 victory. Marist Catholic went on to lose to Mazama 27-21, the first championship in the Vikings’ history.

Four months later, Marshfield finally got its shot at Mazama in the teams’ season opener in Coos Bay, and the Pirates more than made up for lost time. They built a 35-7 lead through three quarters en route to a 35-20 victory that cemented Marshfield’s status as a strong contender for its first state title since 1992.

“We were all very eager and excited for the opportunity to see where we stood,” Pirates coach John Lemmons said. “The kids embraced the challenge and rose to it.”

The Pirates entered the game with questions on the offensive and defensive lines and exited with Lemmons feeling better about their development heading to a Week 2 matchup with Class 5A Churchill.

“I feel like we have the opportunity to do something special,” he said.

One position where Lemmons had no concerns was at quarterback, where senior Dom Montiel built upon his outstanding spring with a solid opening game, going 19 of 30 for 330 yards and four touchdowns with two interceptions. He also ran for 45 yards and a score, showing off his improved ability to make plays with his legs.

“He’s getting better as a run threat, and he’s showing quite a bit of confidence,” Lemmons said. “He can still improve on reading the field pre-snap, understanding where our advantage is numbers-wise and taking what the defense gives you. But the kids believe in his ability to lead the team and move the ball down the field. Everyone is having fun right now.”