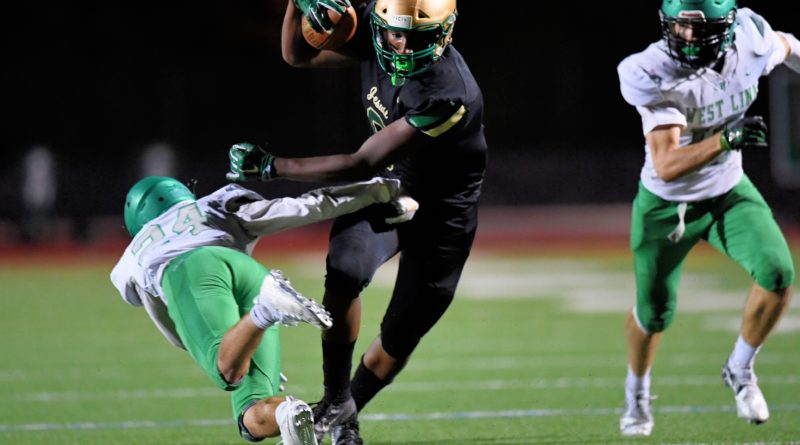 Now, we focus specifically on the Week 2 schedule. Here is an inside look at the top high school football games across the state of Oregon this week (Sept. 9-11).

The game of the week matches the Foxes, ranked No. 2 in the SBLive Oregon 5A media poll and led by three-year starting quarterback Jordan McCarty, against the Timberwolves, ranked No. 1 in 6A and coming off an impressive victory in the Bay Area against Menlo-Atherton, one of Northern California’s top teams.

The Papermakers’ tour of Oregon powerhouses continues as they take on a Cavaliers team raring to get started after seeing their Week 1 game wiped out by COVID.

Neither of these perennial powers is used to starting 0-2 — the Tigers haven’t done so since 2015, and the Crusaders last did in 2014 — but that fate befalls whoever loses in this matinee at Cronin Field.

Two of the top quarterback prospects in the state reside in the Beaverton School District and square off in this Metro League opener. Brian Mannion leads the Mavericks against Sam Leavitt and the Wildcats.

The Black Tornado sat out Week 1 because of a COVID outbreak at their California opponent. Ranked No. 9 in the SBLive Oregon Class 6A media poll, they head up I-5 to meet the No. 4 Lions, coming off an impressive Week 1 victory over Jesuit.

The Bowmen fell to Lakeridge in Week 1 and look to bounce back against the other Lake Oswego team. The Lakers roared out of the gates with an emotional 40-7 romp over Mountainside on the night they honored former Lake Oswego coach Brian Bartsch, who died in July.

These teams sit Nos. 4 and 5 in this week’s SBLive Oregon Class 5A media poll, with the No. 5 Bulldogs taking to the road to meet the No. 4 Cougars for only the second time in these programs’ long histories. Canby won the only other meeting, 17-14 in 1983.

East meets West in this matchup of Northwest Oregon Conference titans. The Wildcats, ranked No. 3 in 5A, head up I-84 and look to slow down the No. 9 Buckaroos and junior tailback Payton Lambert, who ran for 139 yards and three touchdowns in a Week 1 win over Southridge.

With COVID cancellations hitting several Southern Oregon teams, plenty of schedule shuffling has taken place. One of the resulting matchups is this intriguing contest pitting the Pirates — the No. 1 team in 4A — and the No. 9 Lancers from 5A.

If the Braves, who topped Gladstone in Week 1, knock off the Rangers on Friday, can they lay claim to the Tri-Valley Conference title on top of the Cowapa League championship they’ll play for later this season?

This is a sneaky good game on the north Oregon coast featuring two teams whose offenses showed little signs of rust in Week 1. The Spartans scored 49 points in a win over Sweet Home, and the Cheesemakers put up 48 in defeating Newport.

Two powerhouse small-school programs looking for quality competition before starting league play square off in a rematch of the 2017 Class 2A state championship game. The Dragons won that year in the first of the Wolverines’ back-to-back losses in the final.

Another intriguing matchup of powers from different classifications, with the 2019 Class 3A champion Eagles traveling to Mt. Angel to face a Trojans team that has reached the past two 2A finals, winning it all in 2018.