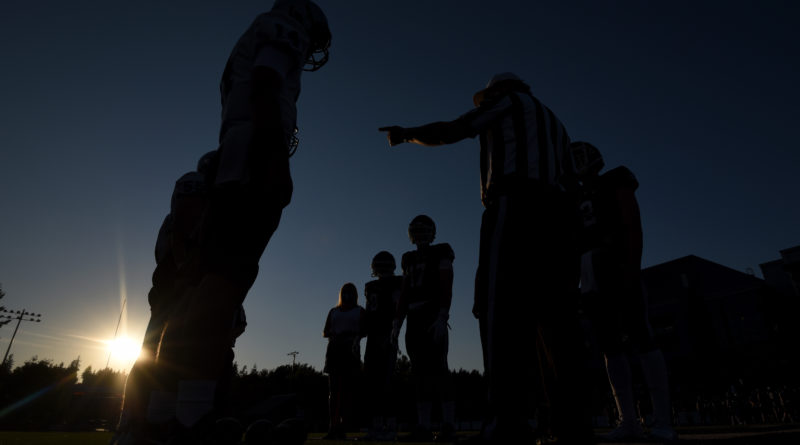 Here’s what stood out during the opening weekend of action.

It has been a few years since the teams that make up the Mountain Valley Conference have made a lot of noise at a statewide level.

So, when the MVC kicked off the 2021 fall season by going 6-1, posting victories over teams from the PIL, Southwest and Pacific conferences, it might have surprised some observers, but not those who coach in the MVC every day.

“It was great to see the league’s success this week,” said Mountain View coach Brian Crum, whose team beat Century 42-22 in Hillsboro. “Every year, you keep building, trying to close that gap. I think several schools in the league have solid classes, and you always want to find those things that bring you up.”

The past two seasons before the pandemic-shortened campaign, the MVC went 22-57 out of conference, including 2-7 in the playoffs — with West Salem posting both playoff wins. Only three teams currently in the league have reached the Class 6A quarterfinals in the past decade — West Salem in 2012, 2014 (semifinals) and 2017, Sprague in 2016 and South Salem in 2010.

Crum called the Mountain Valley “a sort of tweener league for 6A” and pointed to several factors that hurt the team in nonconference play, including socioeconomics, fewer transfers between and moving into the Salem and Bend schools, and “honestly, the importance (Metro teams) put on football in their schools and communities.”

West Salem coach Shawn Stanley, though, doesn’t buy into any of it. The Titans, who beat Newberg 34-29 in one of Week 1’s marquee matchups, now have seven nonconference wins since the MVC formed in 2018, the most of any school.

“I don’t know where we stacked up last year,” said Stanley, whose team (like Crum’s) went 6-0 during the pandemic season. “But I have a hard time ever saying I don’t think we can’t win a game until we get a chance to go compete.

“We respect the strength of certain leagues, but we also aren’t afraid to play anyone. That’s why we try to schedule a tough nonleague schedule. Win or lose, that makes us better by the end of the year when it really matters.”

Both Mountain View and West Salem suffered heavy graduation losses following their 6-0 springs, which made their victories all the sweeter.

The Cougars had to replace 17 of 22 starters and started seven sophomores against the Jaguars. Two of the holdovers were senior quarterback Jakoby Moss and running back Sayre Williamson, and both had big games Friday — Moss threw for two touchdowns, and Williamson topped 200 yards on the ground and scored four times.

“It was a game of momentum, and I think we learned a lot about ourselves on Friday,” Crum said.

The Titans took on a Newberg team that went 5-1 in the spring and returned several key players, although in a new offense installed by new coach Jeremy Johnson.

Senior Brooks Ferguson, taking over at quarterback for the graduated Jackson Lowery, was an efficient 10 of 16 for 210 yards and three touchdowns — all to Zach Dodsen-Greene in his first game after missing the spring season with an injury.

“I feel like we have some players who are really talented but just haven’t had their chance yet,” Stanley said. “Last year’s team was filled with a bunch of great young men who were really fun to coach, and this team is no different.”

Sprague (5-1 in the spring, losing only to West Salem) went on the road and knocked off an up-and-coming Corvallis team 41-20, and McNary posted its first nonconference win since 2017 by defeating South Medford 35-13 at home. Bend (27-7 over Grants Pass) and South Salem (42-0 over Jefferson) were the other MVC Week 1 winners.

Corvallis’ home loss to Sprague notwithstanding, Week 1 generally went well for Class 5A teams who went up a classification to take on a 6A opponent.

No win was bigger than Silverton’s 41-7 romp over PIL favorite Grant, further stamping the Foxes as one of the teams to beat in the 5A championship race.

In all, Class 5A teams went 6-1 against 6A competition on Friday night, including 4-0 against the PIL. South Albany earned its first win of the calendar year with a 21-14 victory over Franklin, while Crescent Valley and Pendleton each held on for one-point road wins at Lincoln and Southridge, respectively.

“I think there are some strong 5A programs this season, which is good to see,” said Silverton coach Josh Craig. “It’s only Week 1, so it’s hard to say if there is much knowledge to gain from a few of these wins over 6A opponents. I think if anything, it means that the 5A/6A matchups were well-decided when they put the schedule together.”

The Foxes gained 525 yards of total offense to just 85 for the Generals, with Jackson Pfeifer running for 73 yards and three touchdowns and Jordan McCarty throwing for 322 yards and a touchdown and rushing for another score.

“Winning Week 1 is always a good thing” Craig said. “We were happy with the way we played and our energy level. We have high goals and are excited to get after it each week.”

The Foxes play another 6A opponent this week in Tualatin, so they certainly are not easing their way into Mid-Willamette Conference play.

“In my opinion, Tualatin is one of the best teams in the state and may have a chance to win the whole thing,” Craig said. “But once league play begins, after that it’s almost like the season restarts. Our league is setting up to be the toughest it’s been for several years, so we will have to be ready to battle each week.”

In the title Chase: West Linn senior has solid debut at quarterback in win over Jesuit

West Linn coach Chris Miller didn’t settle on senior Chase Harmon as his starting quarterback for Friday’s Week 1 matchup with Jesuit until the day before the game.

Miller split the first-team reps among his three contenders through Wednesday. After having sophomore Nick Sakys play in the JV game Thursday, Miller had Harmon and junior Earl Ingle equally divvy up the practice reps that evening.

Miller still didn’t know what to expect after making his call to start Harmon in a matchup of SBLive Oregon preseason top-10 teams, but Harmon’s solid showing — 18 of 23 for 234 yards and two second-half touchdowns in a 17-3 victory — “exceeded my expectations,” Miller said.

“Chase has a lot of weapons at his disposal, so he won’t have to carry us to win games,” Miller continued. “But he’s a workaholic. He loves the sport, and he’s built a good foundation the last week to 10 days. He performed very well, made three big scramble plays. He answered the call, and to see him have that success is exciting.”

Could Harmon — a career backup, first behind Ethan Coleman, then in the spring to Blake DeBisschop — write a similar finish to his senior season at West Linn to what Jackson Laurent did at Lake Oswego three years ago?

Miller cautions not to extrapolate too much from one game, but we shall for just one moment. Like Laurent three years ago, Harmon has a wealth of skill talent surrounding him — perhaps no one the caliber of two-time state offensive player of the year Casey Filkins, but certainly as deep of a receiving corps as the Lakers had that championship season, with junior Mark Hamper and emerging sophomore Wiley Donnerberg among the biggest threats.

Even better, the Lions defense was as good as advertised in Week 1, holding the Crusaders to 102 yards on the ground and 242 yards total. Ingle (six tackles, tackle for loss) at linebacker and Hamper (seven tackles) and senior Jordy Tawa (four pass breakups) in the secondary led the way.

Miller, though, won’t indulge such thoughts. He’s focused on his still-developing offensive line, which returns three starters but has yet to jell, and determining which of five running backs to settle on as a lead back after the team rushed for just 47 yards Friday — all with North Medford coming to town this week having not played in Week 1 because of a COVID outbreak at opponent Del Norte, Calif.

“We had a lot of self-inflicted wounds, like three penalties that cost us third-down conversions,” Miller said. “And with 15 new starters, it’s going to take time to gain traction on offense. But with the schemes we run and the skill players we have, if we shore up our line, this team has the ability to go far.”

More than he bargained for: Trip to Bay Area exceeds Timberwolves coach’s expectations

When Tualatin coach Dan Lever scheduled his team to open its season in the Bay Area against a Menlo-Atherton team that was No. 49 in SBLive California’s preseason rankings, he wasn’t just thinking about X’s and O’s or W’s and L’s.

“The trip was really all about us spending some time together as a program,” he said. “We focused on the process and enjoying each other — something that has been tough to do the past couple of years.”

The Timberwolves went into the game down five all-Three Rivers League starters because of injuries, but they got big games from two stars and saw a couple of role players step into leading roles in a 44-33 victory over the Bears.

Senior Jackson Jones, one of the top quarterback recruits in the Northwest, threw for 233 yards and three touchdowns, including a critical red-zone score to Noah Ogali as Tualatin nursed a 29-27 lead late in the game. Peter Burke also had a touchdown catch, and all-TRL running back Malik Ross ran for 148 yards.

“The trip exceeded my expectations in many ways,” Lever said. “I was concerned going into the game, because M-A is probably one of the best 0-2 teams I have ever seen. Our defense was tasked with containing some very explosive playmakers and made some key stops when we needed them, and we saw some guys really step up when we needed them.”

Among the eye-popping results Friday night were two involving Metro League teams at opposite ends of the spectrum. Sunset, which was the fourth 6A team to finish the spring season undefeated, announced it was no fluke with a 48-6 road thrashing of Tigard, while Aloha went on the road and suffered its worst loss since 2017, with Liberty romping to a 56-0 victory. We left the Falcons off our preseason top 25, a decision we may soon rue. … Just as impressive was Westview in a 49-0 victory over Oregon City — the Wildcats’ first shutout in almost 10 years. That they did so without big games from two of their top weapons, Darrius Clemons (two catches for 32 yards) and Aaron Jones (did not play), makes the victory even more impressive. Junior Jordan Fisher (196 rushing yards, two touchdowns) could be the breakthrough star of the week. … After seeing the defenses own a historic advantage in season openers during the spring (32 shutouts in Week 1), things only reverted somewhat to normal in the fall. There were 20 shutouts in Week 1, which topped 19 from 2018 as the most in the opening week of a full season this decade.