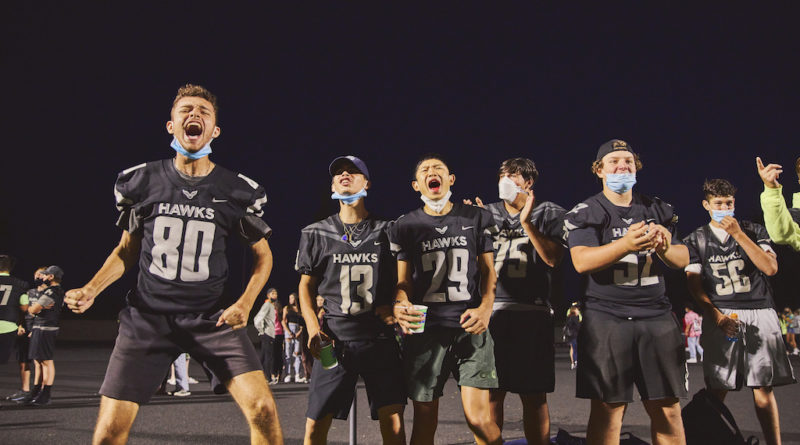 Junior kicker Henry Nelson has lined up to boot the football many times during his high school career. But none before matched this moment under the lights in front of a buzzing crowd. He was about to put the ball into play for the first game in Adrienne C. Nelson High football history.

“It was a rush doing the first kick,” Nelson said. “It’s something I’ve done a million times, but I was nervous leading up to it. We are a new school trying to prove something.”

The kick boomed down the middle of the field before touching the ground and skittering across the turf before finding Barlow’s Dakota Pillster near the numbers on the right side of the field.

And that is how a night of firsts began for the Nelson Hawks football program.

Pillster dodged a number of tackles and scampered across midfield before darting back to the outside with two Hawks cutting down the angle toward the sideline. Sophomore linebacker Owen Hunt got there first, driving his shoulder pads into Pillster’s hips and bringing him down — the first tackle in school history.

A few plays later, Barlow took a shot to the end zone.

Nelson defensive back Reid Gray stepped in front of the intended receiver and swiped the interception just ahead of the goal line — the first takeaway in Hawks history.

Gray flashed down the sideline for a 30-yard return that brought the fans to their feet and had his teammates slapping helmets and hopping up and down.

“I was pretty excited to catch that one,” Gray said. “All week, the coaches told us to stay deep. I saw the ball coming and knew it was my time. Everyone was going crazy, and all my brothers were hyping me up.”

More firsts were soon to come.

The Hawks’ first penalty was an ineligible player downfield. The team’s first yards from scrimmage came on an 8-yard run by junior Jack Gandert.

Later in the first quarter, Nelson moved the chains for the first time when junior quarterback Alex Nita rolled to his right and hit Gray for a 25-yard gain on third-and-13.

“It was great. We want to start traditions here, and I’m really excited for our future — we have big things ahead,” Nita said.

Gray stayed down on the turf after the play, and after a visit from the school’s trainer, he did not return to action. He spent the rest of the night walking gingerly on the sideline.

“I was impressed with our intensity and tenacity,” Hawks coach Aaron Hazel said. “We had two of our leaders out early, but the kids stepped up and fought hard. We don’t have a lot of depth, so injuries are something we will have to manage throughout the season.”

The visiting Bruins, a 6A semifinalist in 2019, used a clear advantage up front to clear paths for big chunks of yards and took a 20-0 lead into halftime.

Nelson came up with one more big moment early in the third quarter. Barlow was marching into Hawks territory before coming up against a fourth-and-1. The home fans pounded their feet to create a loud rumble from the bleachers, and the Nelson defense responded by plugging the middle of the field and getting a stop. Hawks players skipped off the field with arms raised after winning the battle — the team’s first defensive stand.

“For a lot of us this is our first time on varsity, and getting that stop meant a lot,” Hunt said. “This is new to a lot of us, and it’s been a lot of work, but now we know what we need to do to improve.”

“Seeing the community come together tonight, from the cheer team to the student body, that’s one of the big reasons I came here,” Hazel said. “It was loud the whole night.”

The Bruins added three more second-half touchdowns to finish off the 41-0 win.

Other Nelson firsts such as first points and first win will have to wait for another night.

“For us, this season is all about creating momentum. At the end of the season, we want to look back and see that we got better every single day,” Hazel said. “Barlow is a bear of a first opponent. They are big and physical, but I’m excited with how our guys played their tails off.

“This is an awesome group of kids who have totally bonded together. You couldn’t ask for a better group to take on a challenge like this.”