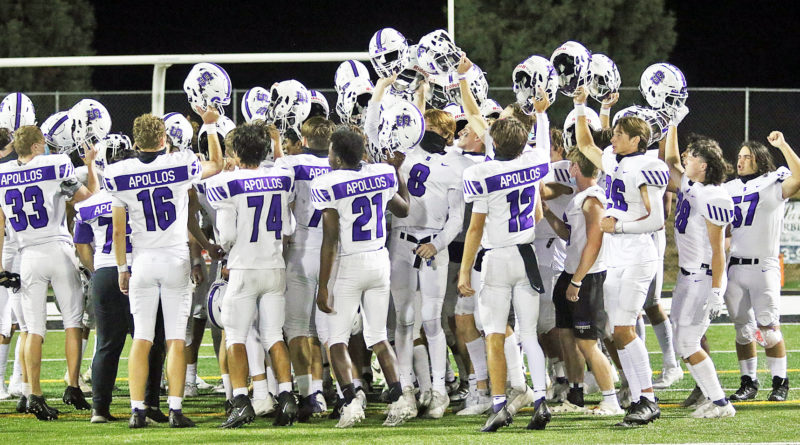 It just doesn’t seem to matter to the Sunset football team — the Apollos just keep on winning, and winning big.

Sunset, coming off a perfect 6-0 revised spring 2021 season, where it turned in one dominating performance after another, started the 2021 fall campaign the exact same way, as it powered its way to an impressive 48-6 win over Tigard in a season-opening nonleague game Friday at Tigard High School.

“It went really well,” said senior quarterback Grady Newsom, who had three touchdown passes in the victory. “We really showed out there that we put in a lot of hard work with our conditioning; we made a good effort and took it to them.”

“We came in with the mentality that last year was something we could build off of,” said senior running back/linebacker Caleb Kim, who had three touchdown runs and an interception. “I think we did a really good job showing that today, but I think we can also improve and get better for next week.”

“I think we did everything we wanted to do,” said senior receiver/defensive back Hayden Hurley, who had two touchdown catches and an interception. “We came out with good tempo and played physical. That was one of the keys to the game, with all of their big linemen.”

Going back to last spring, the win was the seventh in a row for the Apollos, who are carrying some very high hopes into the season.

“The potential for this team is to go all the way,” Newsom said. “That’s been our goal from Week 1, and we have 13 more weeks to go. That’s the goal.”

“We think we’re better than everyone else thinks we are, but we’re just going to take it week-by-week,” Hurley said. “I would say the leadership we had in the spring was greatly influenced by some of the juniors that we have back. We didn’t skip a beat. We want to make sure that this year is the same thing. We’ve been practicing hard, and we’ve been ready to go the past two weeks.”

For Tigard, which went 2-3 in the spring while fielding a young, but promising, squad, the season-opening loss could turn out to be a beneficial learning experience.

The Tigers certainly seemed to be fired-up at the start of the game, playing in front of their home crowd, including a toga-clad student section.

Boschma ended Sunset’s first possession with an interception and a 20-yard return.

Grant carried the ball seven times for 42 yards on that initial Tigers drive, helping set up a 26-yard field goal attempt. But the kick drifted to the right of the goal post, keeping the game scoreless.

With Sunset’s potent offense, it didn’t stay that way for long.

In the Apollos’ ensuing possession, Newsom completed two passes to senior Chase Limbocker, setting up a 15-yard touchdown pass from Newsom to Hurley, who made a tiptoe catch on the right sideline of the end zone for Sunset’s first score of the season.

“It means a lot to me, because I didn’t score last year,” Hurley said with a smile. “I’m just glad that I can show what I can do and step into a bigger playmaker role.”

Senior Luke Nees added the first of his six extra-point kicks, giving Sunset a 7-0 lead with 1 minute and 54 seconds left in the first quarter.

The Apollos took off from there. In their next possession, Newsom completed two passes to senior Kynton Schnoor, helping set up a 2-yard touchdown blast by Kim. The touchdown upped the Sunset lead to 14-0 with 6:54 before halftime.

After that, a long, electrifying punt return by Hurley, with a horse-collar tackle penalty tacked on, gave Sunset a short field. The Apollos took advantage, needing two plays to move 19 yards, capping things with a 10-yard touchdown pass from Newsom to senior tight end Aiden Timbo, making the score 21-0 with 4:04 left in the second quarter.

Sunset wasn’t done. With 9.1 seconds left in the period, Newsom and Hurley hooked up again, this time for a 15-yard scoring pass, with Hurley making a leaping catch in the right side of the end zone.

“I’ve got a great connection with my quarterback. He finds me when I’m open,” Hurley said. “We were trying to get me a jump ball. That’s what we work on in practice. I know I was bigger than the cornerback, so I was ready for it.”

The touchdown gave Sunset a 28-0 lead, which it took to halftime.

As the third quarter began, it didn’t take Tigard long to cut into the lead. Grant returned the second-half kickoff 86 yards for a touchdown, breaking into the clear on the left sideline and sprinting to the end zone, making the score 28-6 just 14 seconds into the third quarter.

But the Tigers couldn’t get any closer.

An errant snap on a Tigard punt gave Sunset the ball at the Tigers 1-yard line. Kim powered his way past the goal line on the next play, upping the score to 34-6 with 9:17 remaining in the third quarter.

It didn’t take the Apollos long to strike again. An interception and 41-yard return by Hurley help set up a 14-yard scoring run by Kim, giving him three touchdowns for the game, and giving Sunset a 41-6 advantage with 7:12 remaining in the third quarter.

“It felt amazing,” Kim said of his three touchdowns. “It felt great, but everything was because of my line and my team. It’s all team.”

A 42-yard touchdown pass from Sunset senior Jackson Knight to senior Jack Sanford, coming with 3:49 left in the game, wrapped up the scoring in the Apollos’ 48-6 victory.

“These coaches haven’t seen us beat Tigard before. We know they have a really good program,” Newsom said. “We’ve struggled against them in the past, but we were looking to come out firing tonight, and that’s what we did.”

Newsom sure seemed to have fun in his first varsity start at quarterback.

“I was a little nervous the first drive, but I have such great offensive lineup, with the linemen and Caleb and my receivers,” he said. “I just need to get it to them.”

Newsom completed 18 of 28 pass attempts for 165 yards with three touchdowns and one interception.

Hurley was his favorite target, with five catches for 65 yards and two scores.

“I’ve been playing with him since I was in fourth or fifth grade,” Newsom said. “It was just a matter of time before we got out on the field together on a Friday night.”

Kim, who was a big offensive weapon for Sunset in its perfect spring season, kept rolling in the fall opener. He ran for 98 yards and three touchdowns on 17 carries, and he added three catches for 27 more yards.

They certainly seemed to be in Friday’s game at Tigard. Not only did the Sunset linemen — including senior Anthony Perez, senior Will Taylo, senior Aidan Krause, senior Mahmoud Abdelmoneum and senior Padraig Owens, among others — lead the way for Kim, but they also didn’t allow a sack.

“A lot of people are saying that our linemen are too small, but what we lack in size, we have in heart,” Kim said. “All of those guys have the biggest hearts that you’ll ever see in a group of linemen.”

Also for the Apollos on offense, Limbocker had three catches for 34 yards. Jackson had three receptions and completed 3 of 4 pass attempts for 45 yards.

One win into the season, the Apollos are ready to do what they need to do as they look at their season-long goals.

“All the guys who had big roles last year are stepping into bigger leadership roles, trying to bring up the younger guys to fill in the holes,” Hurley said. “I just think that we kept the intensity and physicality that we had last spring. It’s a big part of the leadership, and the guys getting used to what we did last year.”

Despite the outcome, the Tigers seemed to have some positives they can build on.

“We still had some highlights. But we still have a lot to work on,” Boschma said. “We have to stick together, like a family. Tigard’s all about family and togetherness. We need to play for something bigger than ourselves.”

For the Tigard defense, Boschma had a tackle for a loss to go with his interception. Hare and junior Vaughn Croxton each had two tackles for loss. Wilder and Beers each had one tackle for loss.

“Now, we can see where we’re at and what we have to work on. We’ll watch some film, and this was a great wake-up call, bottom line. Next week, we’ll be ready,” Boschma said. “I think we have a lot of potential. The junior class is full of studs. They just need the mental part. We all need to stick up together, work together and come together as a team.”

Both teams will be back in action next Friday. Tigard will play at Jesuit in a nonleague game at 3:30 p.m. Sunset will play host to Southridge in a Metro League opener at 8 p.m.