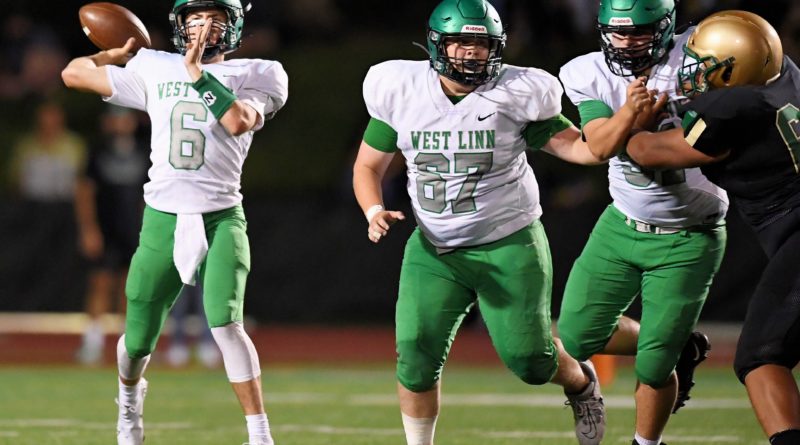 PORTLAND — West Linn’s Chase Harmon had been looking forward to this moment for a long, long time.

The senior quarterback did his normal pregame routine. He went on a 20-minute walk around his neighborhood in the afternoon, envisioning every play in his head.

But this one was a little different. His time had finally come as the starter for the Lions.

“I’ve had this circled on my calendar for probably two years,” Harmon said.

The first-year starter had an impressive debut, passing for 226 yards and two touchdowns as West Linn took down Jesuit, 17-3, on Friday night at Jesuit High School in the season opener for both teams.

Along with helping the program reach the lofty goals it has every year, Harmon is hoping to continue the lineage of standout quarterbacks under former NFL player and current Lions head coach Chris Miller. From Ethan Long to Ethan Coleman to Blake DeBisschop the past few years, West Linn has enjoyed a bevy of talented signal-callers.

“Obviously, there’s a huge expectation, but I’ve known that since I was a freshman here,” Harmon said. “Just knowing I have those big shoes to fill, I think it made me work harder, made me grind harder.”

Harmon was efficient, completing 18 of 23 pass attempts with zero turnovers. He threw his first touchdown pass to junior Mark Hamper on a 49-yard score on West Linn’s first drive in the second half, giving the Lions a 10-3 lead.

“Great throw by Chase — props to him,” said Hamper, who had a game-high 10 catches for 141 yards. “I think he felt the pressure in the first half, but our defense held strong the whole game. He came out in the second half and he balled out and led us to victory.”

The Lions put the game away late when Harmon tossed a teardrop to sophomore Wiley Donnerberg, who muscled his way in for a 14-yard touchdown with 8:15 to go in the fourth.

Miller said he was “really proud” of how Harmon handled his first start.

West Linn’s defense was stifling, limiting Jesuit senior running back Michael Rincon to 43 yards on 14 carries. The Crusaders suffered three series ending in three-and-outs. They had the ball for only 55 seconds in the first quarter.

The Crusaders had a shot to score midway through the second quarter. They reached West Linn’s 5-yard line and had a third-and-2 play, but they could not convert and turned it over on downs.

“I thought our D was going to carry us early in the year as we settle our offense,” Miller said. “The defense played great. Our scheme was good. Our guys really executed. Giving up three points — you should win every game when you give up only three points.”

Jesuit coach Ken Potter said there was a lot “to learn from” this loss.

“Against a really good team, if you blow a couple coverages and do a couple things wrong, they’re going to exploit it,” Potter said.

The Crusaders were integrating their own first-year starting quarterback in sophomore Jacob Hutchinson, who completed 13 of 30 attempts for 140 yards and an interception.

Potter said they did a “good job” despite still trying to find their rhythm.

“It’s pretty much five guys who’ve never played together before,” he said. “They’re trying to learn to play together and they did pretty good for the first game. We knew going in, if you’re playing one of the top 2-3 teams in the state, it’s going to be tough.”

Despite the loss, Rincon expressed his confidence in his teammates.

“I feel like we can get better; I think we’re the better team,” Rincon said. “With just a little more practice, we’ll be able to beat these guys in the playoffs. I thought we were really well prepared for this game and obviously, just a few big plays, that’s all (the difference) was.”

Hamper had an interception on defense.

Although they lost several key players to graduation from a group that went 6-0 in the spring, the Lions haven’t lost any confidence. The goal remains the same — win a lot of games and have a deep playoff run.

“I feel like with this group, you can see it’s a special group,” Harmon said. “We took care of business tonight, but this is only the start. We’ve still got a lot left to clean up and we’ll get it done. Blue trophies, that’s what we’re aiming for.”

Getting back to normal

Players and coaches from both teams said they were happy to be back for a Friday night in the fall after COVID-19 forced last year’s football season to be postponed for an abbreviated spring schedule.

Bleachers were filled with students, parents and fans, while mask wearing was regularly enforced through the PA system.

“The atmosphere having fans in the stands really makes all the difference,” Harmon said. “It means the world to us. We’re just happy that it’s somewhat back to normal. Still getting used to seeing masks on the sidelines, but we’re in a pandemic. I’ll take what I can get.”

Said Miller: “It felt a little more normal. Fans were awesome, and we obviously missed that in the spring. High school football is the most genuine form of athletics, so that was really special.”

Added Potter: “With a huge fanbase, it was fun playing in front of people. It felt much more of a normal football year.”