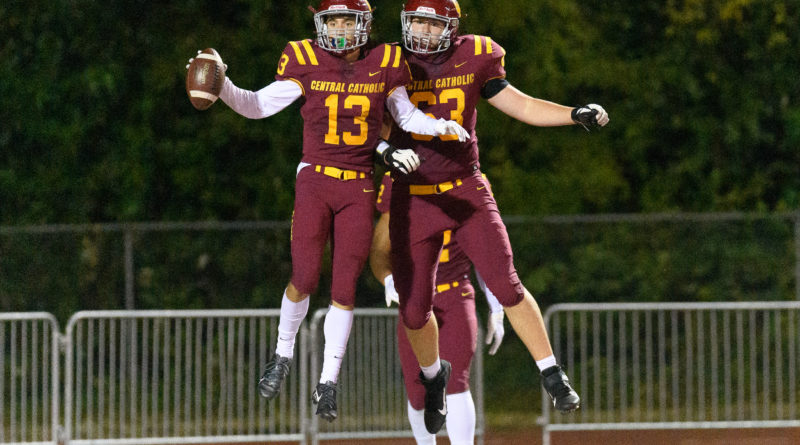 Stryder Todd-Fields had a feeling he’d do something special to open his senior football season with Central Catholic.

So, when a lane opened on the opening kickoff Friday night, Todd-Fields was ready for his moment.

“You always gotta bring great energy to the first play of the game, right?” he said about his 98-yard kickoff return that started the season with a bang for the Rams, who went on to a 28-17 victory over Camas in a matchup of the 2019 Oregon and Washington big-school state champions at Oregon City’s Pioneer Memorial Stadium.

“Camas is a great program, and this was an awesome opportunity to come out and show that we can compete with the best of them.”

With both teams starting new quarterbacks and the game marking the debut of Camas coach Jack Hathaway after long-time coach Jon Eagle’s departure to Portland State’s staff in the offseason, neither team looked in championship form, but the Rams made enough big plays to pull out the season-opening victory.

Central Catholic got a defensive touchdown when Solomon McDaniel snatched a tipped pass by Emar’rion Winston from the air and rumbled 16 yards for a score, and sophomore Cru Newman was 10 for 17 for 215 yards and two touchdowns, including a 73-yard strike to Todd-Fields.

“Our team, for whatever reason, notoriously has not been fast-starting, but you don’t get much of a faster start than a kickoff return for a touchdown,” said Rams coach Steve Pyne, who saw an emotionally up-and-down day conclude by avenging season-opening losses to the Papermakers in 2016 and 2017.

“It took us a while to get settled in offensively, but we made some good adjustments at halftime, and we were able to run the ball a little better in the second half, got a nice ball over the top to Stryder for the touchdown. It was really nice.”

Todd-Fields considered not turning out for football this season after experiencing success on the track in the spring, finishing fourth in the 100 meters and leading off the state-champion 4×100 relay at the Class 6A state meet.

He eventually decided to come out for his senior year, and he started it in the best way possible, bursting through a seam and jetting down the left sideline to score just 14 seconds in.

“I didn’t really have to do anything,” Todd-Fields said. “The credit all goes to my blockers. I just saw a huge gap and had to run straight through it, and when I saw the kicker kind of do this (lean back), I was like, oh, I’m scoring a touchdown.”

He later showed off his track speed on his third-quarter touchdown grab, beating the corner off the line and getting clear of the safety help to haul in Newman’s perfectly thrown ball in stride at midfield, turning on the afterburners from there.

“Stryder is just one of those guys who comes to practice every day and works hard, and he’s kind of a competitive, salty kid,” Pyne said. “He showed tonight he’s a next-level player. He’s got great speed, great instincts. It was Stryder’s night tonight.”

Todd-Fields also had an 85-yard punt return called back for a penalty and intercepted a pass on the final play of the first half.

“To be such a big part of this win against a really high-quality Camas team, I mean, it’s just crazy,” Todd-Fields said. “I’m just happy that my team won and that we were all able to celebrate together.”

The Papermakers entered Friday’s game ranked No. 36 in SBLive Washington’s preseason statewide Top 50, but the defeat — Camas’ first in nine games against Oregon teams dating to 2004 — showed plenty of chinks in the armor that’ll need to be cleaned up as they face a daunting nonleague schedule that includes four of the top seven teams in the SBLive Oregon Class 6A preseason rankings.

Senior Jairus Phillips, who had 2½ tackles for loss and a sack, was left frustrated by careless pre-snap penalties that cost the Papermakers two touchdowns and several other big plays.

The frustration spilled over to the winner’s sideline as well. Yes, the Rams were happy to take home the victory, but they know that 11 penalties, three fumbles on punt returns that led to nine Camas points, and another special teams miscue that led to the Papermakers’ final score won’t cut it down the road.

“We made a few big mistakes toward the end of the game that we’ll want to go back and look over the film and correct,” said Winston, who finished with five tackles and two pass deflections. “They didn’t score on us because they were good in those moments, but more because we were bad in those moments.”

The second-ranked Rams now don’t play another team in the SBLive Oregon preseason top 20 until Week 9, when they finish with No. 3 Clackamas, but they know they can’t get complacent as they prepare for their Mt. Hood Conference opener next week against David Douglas.

Newman split time with Luke Johnson during the spring season, typically playing the second quarter of games, but Friday night marked his first career start. He had two fumbles pulling the ball on run-option plays and nearly lost the ball when it squirted loose as he attempted a pass — officials ruled it an incomplete pass — but came back with a solid second half that he capped with a 13-yard touchdown pass to Jordan King with 9:43 to play.

“We just started slow offensively and needed to improve on a few things, and that’s what we did at halftime,” Newman said. “Our defense and special teams did great and led the way for us, and we just kind of carried it out from there.”

Pyne called Newman’s first start “up and down” but credited him with keeping plays alive and making the two big touchdown throws that allowed the Rams to build a 28-9 lead early in the fourth quarter.

It was senior Emerson Dennis, and not Newman, who salted away the victory with 2:36 to play, hitting junior tight end Riley Williams for an 18-yard completion on fourth-and-6 near midfield after Jamison’s second touchdown closed the gap to 28-17 with 4:36 left.

“That was as big of a gut check as any other throw tonight,” Pyne said. “And I’m proud of Emerson for that.”