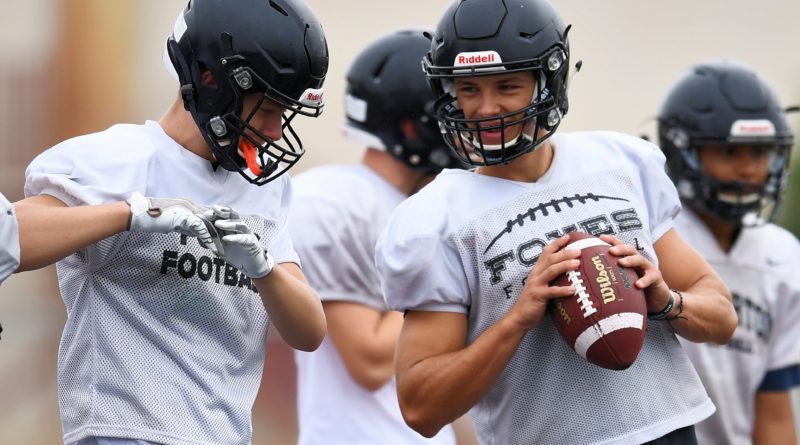 The Oregon high school football season kicks off this week. Here are one writer’s preseason Class 5A power rankings. Click on the link to read the team’s complete season preview.

It’s probably too much to expect more than a couple of wins by Forest Grove under first-year coach Dominic Ferraro, but making up ground toward his vision and goals would be signs of progress.

The Falcons graduated a deep senior class and not only must break in a new starting quarterback but also got a late start doing so with the late-summer hiring of coach Dustin Janz.

Little is expected of Crescent Valley this season, and first-year coach Andrew McClave is perfectly OK with that. The Raiders have a lot of speed across the board and will be able to cause matchup problems in McClave’s mixed offense.

Hopes are high for the Scots, fueled by the return of a quarterback who delivered as a freshman and the team’s two leading receivers from last season. Plenty of players in the defensive backfield also have varsity experience.

The Grizzlies finished the 2019 regular season as the No. 6 team in 5A. After a spring season in which the pandemic drastically affected what they were able to do — and limited them to a JV-only schedule — this season will mark the first step in their efforts to return to that level.

Lebanon has a small senior class, but it’s a group filled with leaders. It’s also potentially a playoff-caliber roster with the chance to be even better in 2022.

With a strong group of juniors and three sophomore offensive linemen, the Panthers are set up for future success. If the program can add some bodies over the next few months, Central could be back in the playoffs sooner rather than later.

There is no sugarcoating the Spartans’ youth. Sophomores are projected to play big roles all over the field. The positive side is that a lot of those sophomores got varsity action in the spring, and the schedule sets up nicely for them to gain more experience before taking on the NWOC West favorites.

The Bulldogs bring back one of their smallest senior classes in recent memory, and their junior class also lacks numbers. They’ll have several talented sophomores at the skill positions, however, and those players aren’t interested in waiting to make their mark in the Midwestern League.

Signs appear to be pointing in a positive direction for the Vikings. Josiah Davis is a top-level weapon, and sophomore quarterback TC Manumaleuna II should be better with another half-year of growth and maturity. If players can stay healthy, qualifying for their first playoff spot since 2015 is well within reach.

The Ravens don’t face Redmond and Pendleton until Weeks 8 and 9, when Ridgeview will have had time to hit its stride. If they stay healthy, develop through the season and find answers to a couple of questions, those final two games should be interesting in and of themselves — and for their playoff ramifications.

Expect the Eagles to be strong contenders for a state playoff spot and — in a best-case scenario in which junior quarterback Michael Frost develops quickly and a generally unproven line protects him — perhaps even the NWOC East championship.

It will be difficult for any team to race down Thurston for the Midwestern title, but the Wolverines have more than enough returning talent to put themselves in contention for a playoff spot.

The Panthers showed they’re ready to turn the corner into becoming an NWOC East contender after a 5-1 spring season. A coaching change should not blunt their momentum.

Two years after reaching the 5A championship game, the pillars that helped that team find so much success still are present in the program. The Comets are a hard-working group that could experience some growing pains but should blossom during the season if things click for the younger players.

With experienced players at every position, the Spartans have the potential to be the surprise of the Mid-Willamette Conference. Corvallis hasn’t won a playoff game since 2014, a streak that could end this fall.

Scappoose averaged more than 37 points per game in the spring, and an experienced, proven core of skill-position players returns. It’s not whether Scappoose makes the playoffs, but what seed out of the NWOC West it will secure, and whether the team can go further than the quarterfinals.

The talent is there for Churchill on both sides of the ball. The Lancers will look to overpower opposing teams in the trenches and deploy an ample collection of talented athletes all over the field.

With linebacker Kyle Liscom continuing to lead the defense and experienced players back at many skill positions, expect the Buckaroos to contend for another NWOC East championship and a high seed in the 5A playoff field.

The Dragons will be tested early with September games against Canby, West Albany and Silverton. The schedule softens after September, and Dallas should be right back in the playoffs — and coach Andy Jackson will do everything he can to ensure the Dragons are playing their best football heading into November.

The Cougars project to have five third-year starters as part of a robust senior class. They close the season with a home game against perennial power Wilsonville. The importance of that game could be determined by how healthy the Cougars can stay and how much belief they have in themselves.

The Bulldogs won’t have the same star power they’ve enjoyed the past two seasons, but their depth in the trenches should keep them among the top-tier teams in the Mid-Willamette and Class 5A.

The Foxes, one of 5A’s most consistent contenders over the past decade-plus, are once again stocked with high-end talent up and down the roster. They appear to have all the necessary pieces to win their first Mid-Willamette championship since 2018 and embark on another deep postseason run.

Starters at 19 of the 22 offensive and defensive positions from the spring are gone, leaving a lot of questions for the Wildcats. The program’s recent history, though, suggests it’s immune to fall-offs. The Wildcats will probably remain the toughest game on the schedule of each of their NWOC West opponents. Anything less than another conference championship would be a surprise, and at least a couple of playoff wins also seem likely.

Thurston is replacing its entire offensive line, and the Colts will have a new quarterback. But with the talent they bring back at the skill positions and all over the defense, they have every reason to believe a third consecutive state crown is within reach.