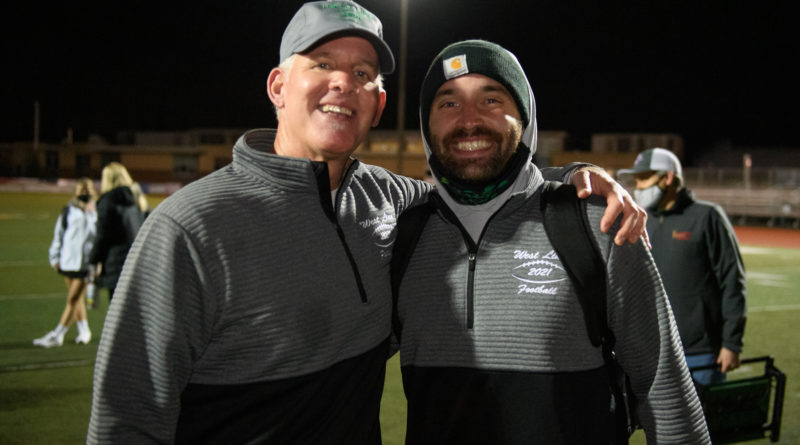 For decades, the game of football has bolstered the bond between fathers and sons across America.

Chris Miller and Dillon Miller are no exception.

The former standout quarterbacks-turned-coaches are looking forward to spending another fall together on West Linn’s sideline. Chris is entering his eighth season at the helm while Dillon, son of the 1991 Pro Bowl selection, will have a more limited role in his seventh year on staff.

Dillon, who recently started a job with Disdero Lumber Company in Clackamas, is no longer involved with day-to-day practices at West Linn. Instead, he will be a special offensive assistant on Friday nights that Chris can rely on.

“I think dads always like to have their sons involved and coaching with them,” Chris said. “Football is such a unique life sport, and it’s fun to share that between father and son.”

An accomplished football player himself, Dillon led Sheldon to the 2011 Class 6A state title game as a senior and was voted first-team all-state. He went on to play for Division II Lindenwood University in Missouri and quickly transitioned into coaching with his dad, a dream scenario for both.

“Coaching was something I knew I wanted to do for a while, and my dad and I coaching together was always a goal of ours,” Dillon said. “It worked out perfectly when we got that opportunity. My dad is basically my best friend, and we love coaching together. West Linn football and the community have been amazing for our family.”

A fresh-out-of-college Dillon was the head coach of West Linn’s freshman team from 2015-17, an experience that brought him back to his childhood.

“When I was going through my freshman year at Sheldon, my coaches were also younger guys,” Dillon said. “I really related to them, and that made it fun for me. I tried to pay that forward.”

Dillon received a promotion to varsity assistant in 2018-19, and he committed to running West Linn’s freshman team under new head coach Keanon Lowe after Chris accepted an offensive coordinator position with the XFL’s Houston Roughnecks. When the XFL was put on pause by the COVID-19 pandemic, Chris returned to the Oregon high school ranks at Franklin; Dillon was slated to be offensive coordinator.

In a surprising turn of events, Lowe would not coach a game at West Linn as the former Oregon Ducks receiver took a job on Chip Kelly’s UCLA staff during the height of the pandemic. The Millers slid back over to West Linn and guided the Lions to a perfect 6-0 record last spring and an unofficial state championship.

An offensive assistant during the spring, Dillon will have a smaller role when West Linn begins the 2021 fall season Friday at Jesuit.

“I got a new job which is hopefully going to be a long-term career for me, and it’s been going really good so far,” Dillon said. “It’s a little more time-consuming for me, but I will still be there on Friday nights helping the quarterbacks and providing an extra pair of eyes.”

The additional set of eyes is invaluable to Chris, an Oregon Sports Hall of Fame member who starred at Sheldon, with the Ducks and in the NFL.

Chris, who also coached for the Arizona Cardinals, compiled a 33-29 record in six seasons at South Eugene before taking the West Linn job before the 2014 season. He is 66-16 with the Lions and delivered the program’s lone state title in 2016.

Though a players’ coach through and through, Chris acknowledged Dillon is more even-keel on the sidelines. It is far from a traditional good cop, bad cop routine, but Dillon makes sure to be uplifting whenever possible.

“He’s calling the plays, so he has to be a little more stern and firm with what he’s seeing,” Dillon said. “My job is to love the guys up and be that younger coach who … is trying to make sure they know that they’re doing a good job. And my dad is obviously, in my opinion, as good as it gets as a quarterbacks coach technically, so I’m not doing as much of that.”

Added Chris: “I would say that we’re both generally pretty patient, calm, mellow, West Coast easy-going guys. He has a really good demeanor, and he is very anticipatory as far as putting play packages together and stringing plays together. I also think we both have that fiery spirit. We’re competitive and we get into it.”

At age 56, Chris’ coaching career is far from over. When the veteran tactician decides to step away from West Linn for good, Dillon would appear to be an obvious choice to succeed his dad.

Dillon said he does have desires of becoming a head coach down the road, but the 27-year-old is happy with his current role for the foreseeable future.

“I know how much time my dad devotes to the program and the kids, which is a lot more time than I can devote right now,” he said. “When I get to the position where I have some more time, I would like to get more involved and maybe take over for my dad when he is ready to hang it up. But I just turned 27 in July. I’ve got time, and I’m just trying to get set up to provide for a family of my own.”