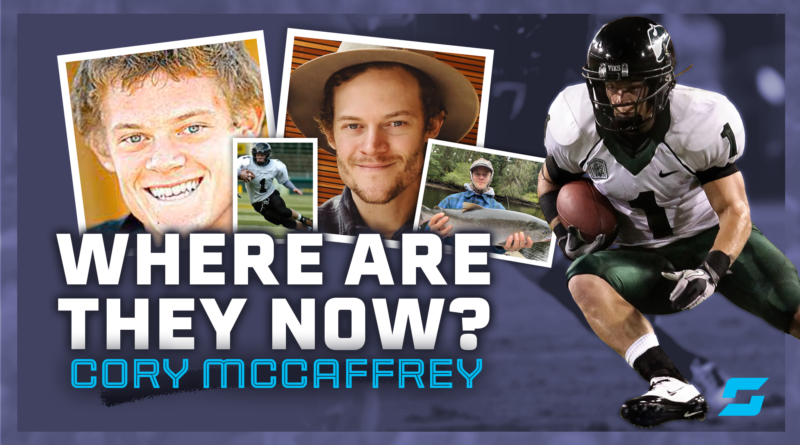 Cory McCaffrey knows a thing or two about piling up numbers on the football field, and now the 31-year-old is working to do the same for fish populations in the Northwest.

McCaffrey is Oregon high school football’s all-time leading rusher with 8,460 yards over his three varsity seasons (2005-07) at Sisters. The Outlaws went 25-2 in his junior and senior years — their only losses coming in the 4A title games.

“I was very steady with my yardage and it just compiled over the years,” McCaffrey said. “But for me, I never paid much attention to the numbers. I just wanted to score as soon as possible and go back and join my teammates on the sidelines.”

McCaffrey was able to pick up 20-yard chunks by using his speed to get outside the hash marks and away from the big bodies in the middle of the field.

“My thing was getting outside the tackles — getting to the edge was my ticket,” he said.

Sisters coach Bob Macauley didn’t win league titles by simply giving the ball to his running back every down. Instead, he brought balance to the game plan by trusting quarterback Jarred Hasskamp to know when to put the ball in the air.

“We’d hand me the ball and either we’d score or the defense would catch on, and Jarred would start dropping dimes,” McCaffrey said. “Teams would slide their linebackers over, and that is when we would start throwing the ball.”

Hasskamp and McCaffrey remain close friends more than a decade after their playing days together.

“They were our league rivals and ranked No. 1 — I just exploded for 400-something yards and we won the game,” McCaffrey said. “That was a great day for me.”

He and his fiancé, Molly Vance, moved to Walla Walla this past spring. That meant a trip down memory lane while loading packing boxes. The two met well after his playing days were done.

“We were going through it, and she said, ‘Wow, you’ve got a lot of stuff here,’” McCaffrey said with a chuckle. “It was fun going through the scrapbooks, the medals and all of the newspaper articles.”

His prized possession is the game ball from the night he set the career rushing record.

“I’ll have that forever,” he said.

Coming out of high school, McCaffrey was recruited mostly by Division I-AA programs. He landed at Portland State, where Jerry Glanville and Mouse Davis employed the Run-N-Shoot attack — heavy on the shoot and light on the run.

“It wasn’t my forte,” McCaffrey said. “Instead of seeing the whole field and going into the action, now I had my back to the play and was trying to find empty spaces.”

In 2010, the Vikings made a coaching change to Nigel Burton, who returned McCaffrey to the backfield, where he earned All-Big Sky honors each of his final two seasons.

“That was my position — I was back in my element,” McCaffrey said.

His biggest college game was a 222-yard, four-touchdown performance in a home win over Northern Arizona his senior season.

McCaffrey earned his master’s degree in Environmental Science in 2016, and he began to stoke his love for the outdoors with a two-month solo hike that took him from central Montana into eastern Washington largely through stretches of Glacier National Park. He saw eight or nine grizzly bears along his trek and enjoyed riding a natural water slide in northern Idaho that emptied into a big pool.

“It was amazing,” he said. “When you go three or four days without seeing a person, you learn to enjoy those interactions.”

The roar of a football stadium has been replaced by the quiet of bow-and-arrow hunting — a pursuit he has tackled in recent years.

“Now, it’s hunting and fishing that gets my adrenaline going,” McCaffrey said. “It’s been a huge learning experience to pick up the habits and patterns of animals.”

Being in tune with nature is a key element of his job as a Project Manager in River Restoration with the Tri-State Steelheaders. He is spearheading a multi-million dollar project to enhance fish passage through downtown Walla Walla by installing flood control panels and resting pools.

He and his fiancé have a 2-year-old daughter, Naia.

“My grandpa Joe was an avid fisherman. Back in the day, he’d come back with 10 fish. Now if you catch one or two you’ve had a big day,” McCaffrey said. “I’m excited to push the needle the other way, and make sure that resource is still there for my daughter and for my grandkids.”