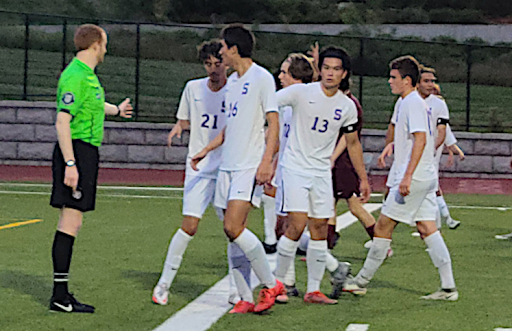 The Sunset boys soccer team saw the preseason coaches poll that didn’t even have the Apollos among the “others receiving votes” section.

Then again, they understood why they came into Monday’s season opener against Franklin so overlooked. The Apollos went 2-3-5 during an injury-plagued spring season, delayed six months by the COVID-19 pandemic and shortened to six weeks to cram nine months of sports into a three-month window.

Senior Shinjiro Metzger, for one, took the preseason inattention in stride.

“I noticed it, but I don’t really think about it too much,” he said. “We’re here to prove something this year.”

If Monday’s game is any indication, the Apollos might prove all the skeptics wrong. In a wild back-and-forth match, Metzger’s goal with 5:55 to play gave Sunset a 4-3 victory over the 2019 Class 6A state champions on their home field in Southeast Portland.

“We have a great team and a lot of depth,” said Metzger, who also scored off a corner kick in the eighth minute. “I knew that when I became a senior, my team would be great and have a lot of potential, and I’m really glad we fulfilled some of that today and proved we could perform in these tough games.”

The Apollos scored just six goals during their 10-game spring season and were shut out five times. One of their two victories came in their season finale on this same field — a 1-0 win that capped a four-game closing stretch during which they went 1-0-3 and scored five of their six goals.

Sunset coach Conrad Buck, who took over the program during the pandemic, saw the improvement toward the end of the spring season. Having a full summer to prepare for the fall season made even more of a difference.

“It’s still a work in progress, but to have this amount of time and just to get back to somewhat of a normal season, it’s really nice,” Buck said.

The Lightning fought back from a 3-1 deficit to tie the score at 3-3 in the 66th minute off a free kick when senior midfielder Henrik Stacklie-Vogt gathered a loose ball in the penalty area and lofted the ball into the top-left corner.

Nine minutes later, Apollos striker Aaron Lopez intercepted a poor clearance pass about 30 yards out and found Metzger near the top of the penalty area. Metzger turned and fired on net, with his blast getting through the keeper’s hands and trickling into the net.

Metzger was a first-team all-Metro selection during the spring, when he transitioned from being a full-time left back to an attacking midfielder. Buck moved him back Monday night to help defend the 3-1 lead, but once it evaporated, he moved Metzger back up top, searching for the winning goal.

“He rewarded us, which was good to see,” Buck said. “He had a lot of frustration last year with finishing. Our whole team did. It was really nice for him to really show what he can do tonight.”

The Lightning entered Monday’s game ranked No. 6 in the OSAAtoday preseason coaches poll, and coach Jose Milian liked how his team showed its resiliency after twice falling behind by two goals in a game that had playoff intensity despite it being a late-August opener.

“The biggest thing for us was being able to adjust to that playoff atmosphere, the back-and-forth battles against a really good, quality team,” Milian said. “It says a lot for us, too, because we’re really trying to find our identity, so the biggest thing is to know we’re able to fight back in a game.”

With no playoffs during the spring season, the Lightning enter the 2021 campaign as the de facto defending state champions, but senior midfielder Caden Davis, one of the few players left from that team, doesn’t consider this season a title defense.

“Not really, but I do want another one,” said Davis, who is on the preseason High School All-American Watch List. “This was not the start we wanted, but it’s probably the start we needed. It was a good wakeup call for us, I think. If we can keep this momentum going by the time we get into the (league) season, I think we’ll be looking good.”

The Apollos jumped out of the gate on fire, scoring twice in the first 7:08 to stun the host Lightning. Both goals came off set pieces, with Lopez toe-poking a deflected shot off a corner kick home just 1:44 into the game.

Metzger then ran free to the near post and headed home Sebastian Meyer-Behrend’s corner kick for a 2-0 lead.

The Lightning closed the gap to 2-1 in the 22nd minute when Emile De L’Isie gathered a loose ball from a long throw-in and blasted it into the top-left corner. Three minutes later, Zach Marostica restored Sunset’s two-goal lead by slotting a penalty kick low to the right corner.

De L’Isie got his brace 7½ minutes after halftime when he ran onto a through ball just ahead of Allan Tanguy, tapping it past the sliding Sunset keeper to pull the Lightning to within 3-2.