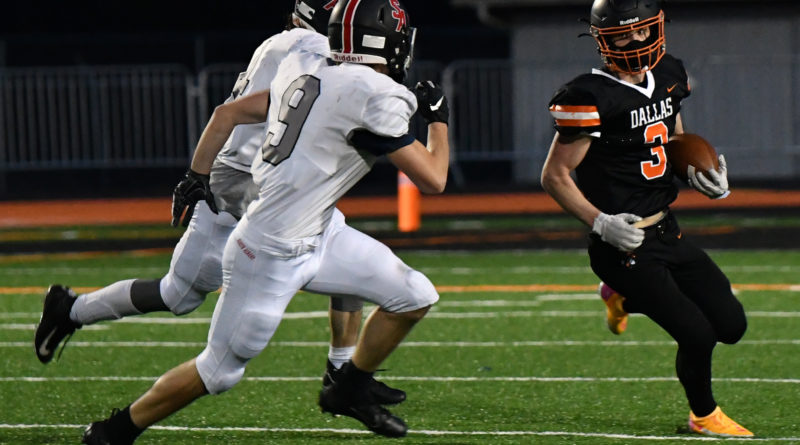 The Oregon high school football season kicks off this week, and SBLive has rolled out a comprehensive statewide preview.

Here, we examine each 5A team’s most irreplaceable player. Who is one player that if he were to miss a game, his team’s chances would take a massive hit? We answer below.

Hughes played quarterback last season and received all-NWOC East honorable mention. The hope this season is that he moves back to wide receiver, a position that is seen as a better fit for him, especially considering he was voted first-team all-NWOC East as a returner.

As a freshman, Ellison was first-team all-NWOC East at tight end and received honorable mention at linebacker. That’s part of what prompted first-year coach Dustin Janz to say Ellison has “crazy upward potential.” Ellison tied for the team lead in sacks and regularly featured in the Falcons’ passing game in the spring.

Scott is the Broncos’ most accomplished skill-position returner. He earned all-NWOC East honorable mention at wide receiver and safety last season. As a junior, he was part of a 1-2 punch at receiver with then-senior Keviantae Hill, but this season Scott is expected to be the No. 1 receiving threat.

Liscom was NWOC East defensive player of the year as a junior — his second consecutive season ranking among Class 5A leaders in tackles — and was a first-team SBLive Oregon all-state selection. He’s considering playing at the Coast Guard Academy. Liscom played slot receiver in the spring but is targeted to play more at tailback this season.

After playing quarterback in the spring, Brown will move back to tight end as a big target down the seam at 6-foot-2, 205 pounds. He was Putnam’s leading tackler last season and was voted second-team all-NWOC East at linebacker, where he is a third-year starter.

Parrish was a starting quarterback his freshman season, didn’t play there as a sophomore because of injury, then moved back in the spring to pass for 890 yards with eight touchdowns and six interceptions (three of them in the Panthers’ only loss, to Hood River Valley). He was voted second-team all-NWOC East at quarterback.

Schwartz was the Ravens’ most productive receiver last season, averaging more than 37 yards and scoring three touchdowns on his six receptions. He stands out for his athleticism and speed — shown by his victory in the 400 meters at the Class 5A track championships in the spring.

As a junior, Pullen led The Dalles with 434 rushing yards (10.1 yards per carry) and five scores on the ground, earning all-NWOC East honorable mention. He was the team’s second-leading receiver and was second-team all-NWOC East as a returner, and this fall he might also take snaps at quarterback.

Strand is 6-5 and 270 pounds, will be a three-year starter on offense and has orally committed to Oregon State. Cougars coach Jimmy Joyce called Strand an “elite-level talent” who will make a big impact on both sides of the line of scrimmage.

Steltenpohl is a returning starter on offense who is ticketed to play the Y receiver in the Vikings’ new spread, no-huddle offense. Steltenpohl also ranked second on the team in tackles for loss in the spring season.

Ellis was Hillsboro’s leading tackler by a considerable margin through two games of the spring season before suffering a season-ending injury. Trying to find the best place for him, the Spartans moved Ellis all over the field on defense in the spring before settling on safety.

Lee, who didn’t play organized football until his sophomore season, will be a third-year starter, having led the team in receiving as a sophomore and a junior. Last season, he had 22 receptions for 386 yards.

Manumaleuna entered high school as a heralded prospect, as he had received a scholarship offer from Oregon before matriculating at North Salem. He split time at quarterback last season and compiled modest statistics, but he led two double-digit comeback wins for the Vikings. A big leap is expected during his sophomore season.

Starting at strong safety as a sophomore in the spring, Dieringer made a huge impact. He led the team in total tackles (48) and forced fumbles, tied for the lead in sacks and was second on the team in tackles for loss. Dieringer should also receive action at running back and H-back this season.

Tolles emerged as the starting quarterback in the spring season, and in his second varsity season, he’s expected to be able to process things more quickly as the game seems to slow down. His mechanics and accuracy have improved.

Playing at weakside outside linebacker last season, Johnson was among the team leaders in tackles (he is Wilsonville’s top returning tackler this season). His two forced fumbles were second-most on the team. This fall, Johnson will play the pivotal strong safety position in the Wildcats’ 3-4-4 defense.

A returning two-way starter, Foreman will be a key piece for the Panthers on and off the field. Coach Joel Everett called him “the main leader on our team” who’ll have to anchor a young offensive line this fall.

A multiyear starter on the line, Tucker is one of the leaders in the Spartans’ deep lineman room. At 6-2, 275 pounds, he is easily the biggest player on the roster, but he displays excellent footwork for his size.

A college kicking and punting prospect, Parker began the spring season at quarterback before moving to receiver. First-year coach Andrew McClave called him “probably the best overall athlete on the team.”

A tremendous all-around football player, Person is one of the top returning talents in Class 5A. A third-team SBLive Oregon all-state selection on offense as a junior, he will shuffle between running back and receiver, start at safety on defense, and handle kicking, punting and return duties.

Wolfe is a critical two-way player for Lebanon. He was an honorable mention all-state tight end as a sophomore and will be a key player on the team’s defensive front this fall.

One of the state’s top quarterbacks, McCarty is rated a three-star recruit by 247Sports. McCarty, also a star basketball player for the Foxes, worked on his throwing mechanics during the offseason, and the improvement has been noticeable.

A varsity starter at running back since his freshman year, Seiber has the ability to make the all-conference team and help the RedHawks bounce back from a winless spring season.

Houston, rated a three-star prospect by 247Sports, received an offer from Oregon State after a solid sophomore season. Coach Brian Mehl said Houston will play corner on defense and a to-be-determined offensive role.

Also a standout baseball player for the Grizzlies, Kemper was Ashland’s de facto quarterback in the spring after Ronin Kimbrough was injured. If Kemper doesn’t start under center, he could have a massive impact as a receiver while also playing strong safety, where he is a solid tackler who has a nose for the ball.

The Lancers are loaded on the offensive line, where they return a wealth of experience. The leader of that group is Thomas, a three-year starter who shifted between center and guard last season.

Jordahl was among a handful of juniors in the state who played in the Les Schwab Bowl this summer. A hard-nosed player on both sides of the ball, the 6-4, 230-pounder is unbelievably athletic for a player his size. He was a second-team all-state selection as a sophomore and could start to get some looks from colleges this season.

A three-year starter, Hill is the leader of the defense and has been tremendous at inside linebacker throughout his career. Coach Erik Johnson loves the energy Hill brings on defense and his ability to anticipate where a play is going.

Green is North Bend’s leader on defense, and he’s a punishing ball carrier on offense. He racked up more than 300 yards on the ground in a reserve role during the abbreviated spring season.

A center and nose tackle, Sattler was dominant as a junior. This season, he will be the Millers’ heart and soul. Sattler has an offer to play at Lewis & Clark — the first of what coach Miles Haley believes will become a torrent of offers by season’s end.

Newell is one of the top players in Oregon and recently committed to the University of Nevada. He starred in the Les Schwab Bowl and is poised to do considerable damage to opposing defenses this season.

In the spring season, Bushnell was one of the most productive receivers in Class 5A. He caught 47 passes for 586 yards, and his seven touchdown catches were the second-most in the state. On defense, he’ll serve as a hybrid outside linebacker and safety.