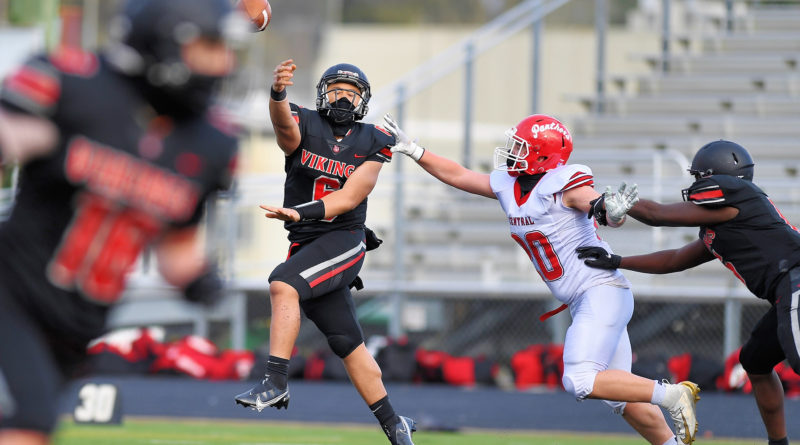 Here are 10 questions for the Class 5A Northwest Oregon Conference West entering the fall 2021 high school football season. At the bottom is Mike Wilson’s predicted order of finish.

1. Why is Wilsonville, which lost starters at 19 of 22 positions, still regarded as the team to beat in the Northwest Oregon Conference West?

Rival coaches are unanimous that the Wilsonville program will continue to mass produce athletic, well-coached, solid football players. “That’s a compliment to the program,” Wilsonville coach Adam Guenther said before preseason practices began. “But we haven’t proved anything yet. Talk to me in about 11 weeks.” And, Guenther said, whether Wilsonville is replacing starters en masse or, as in past seasons, banking on returning experience, the team’s approach is the same: Respect everybody, fear nobody.

2. Which quarterback would you take in your NWOC West fantasy league?

The three favorites to be selected first probably would be (in alphabetical order) Canby’s Mikey Gibson, Wilsonville’s Chase Hix and Scappoose’s Luke McNabb. All are in their third (or fourth) season of playing varsity football. Hix, whose junior season was curtailed by injury, might be the least proven, but the Wildcats seem to have successful passing seasons in their DNA. Gibson also had his junior season cut short and might have the highest senior-season ceiling, given his relative inexperience with the Cougars’ spread offense. McNabb has grown up around the game as the son of a coach and takes advantage of his size and athleticism.

3. Can Hillsboro find its stride before the toughest part of the schedule?

The Spartans won’t face any of the three teams that had winning records in the NWOC West last season until Week 5. That gives Hillsboro an extra half-season of games for its younger players to develop, mature and improve before encountering what are expected to be the team’s stiffest challenges this season. Coach Dan Shuff called the spring season an exercise in survival (owing to injuries), but it gave sophomores and freshmen varsity experience that should pay off this season.

4. What can McKay quarterback Kyrin Fuimaono do in a full season?

In a bit more than two games as a freshman, Fuimaono completed 57 percent of his passes with four touchdowns and one interception. Coach Brandis Piper describes Fuimaono as smart, dedicated to improving and more than capable. “He really puts the ball in a catchable spot,” Piper said.

5. Which North Salem player — other than TC Manumaleuna II — is likely to get the most attention from outsiders?

The sophomore quarterback, the recipient of a scholarship offer from Oregon before his freshman season, will undoubtedly be the subject of numerous online headlines and page views, but junior running back Josiah Davis might play an equally important role in the Vikings’ offense. In the spring, Davis had the fourth-most rushing yards in Class 5A, averaged eight yards per carry and scored a team-high eight rushing touchdowns. He returned a kickoff for a touchdown against Class 6A South Salem.

Forest Grove averaged 10.3 points per game in the spring, among the lowest in Class 5A. A no-huddle, spread offense under first-year coach Dominic Ferraro should help the Vikings’ offensive production. Ferraro acknowledged that achieving the depth needed to operate his scheme might be a challenge in his first season, but he has a plan to address that: “We’ll just have to be the best-conditioned team in the state.”

7. What sources of optimism are there at St. Helens?

One is that out of necessity, younger players logged varsity time in the spring. Coach Cory Young said entering practice that virtually every spot was open to competition, which should be a motivating factor for players at all grade levels. The offensive line is expected to be a position group of strength, which should help quarterback Tyler Tolles in his junior season. The Lions were 2-7 (.222) in 2019 and 1-3 (.250) in 2018. Breaking the two-win barrier looks highly attainable this season.

8. Will Scappoose’s schedule force the team to reach three peaks during the season?

For most teams, the goal is to be playing its best at the end of the season, when, ideally, making the postseason and advancing in the playoffs are the key tasks at hand. Looking at Scappoose’s schedule, the toughest regular-season challenges would appear to be in Week 4 (against Wilsonville) and Week 7 (against Canby). Then, after two more games, Scappoose is likely to need to ratchet things up again with the start of the playoffs.

9. How far can Canby’s senior class take the Cougars?

Jacob Strand, an offensive tackle who has committed to Oregon State, and quarterback Mikey Gibson are at the bleeding edge of a Canby senior class that is expected to make a deep and broad impact on the team. Those class of 2022 players will be counted on for tangible performances as well as leadership. If those seniors measure up to expectations — and if they remain healthy — the Cougars’ Week 9 game against Wilsonville could have conference-title ramifications.

10. Will there be any surprises in NWOC West results this spring?

There sure weren’t in the spring. Among the teams that played an NWOC West schedule, things were pretty chalky. Canby (2-1 NWOC West) lost only to Wilsonville (3-0) and would have been favored to win against any other conference opponent it had played. Scappoose (3-2) lost only to Wilsonville and Canby. Hillsboro (2-2) defeated St. Helens (1-2) and Forest Grove, the team that St. Helens beat.