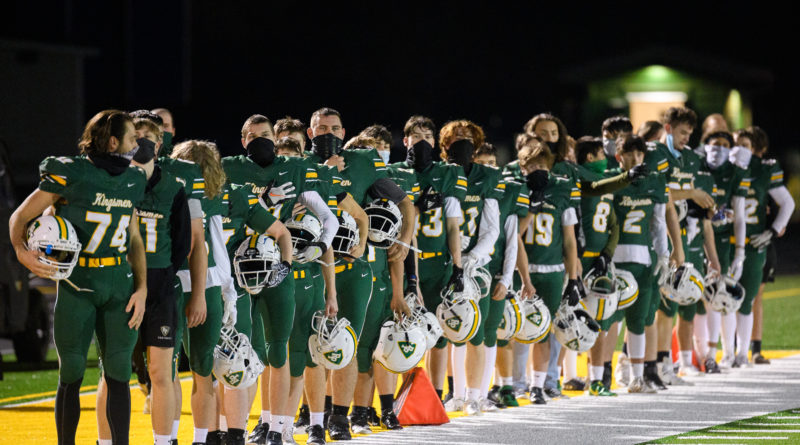 Here are 10 questions for the Class 5A Northwest Oregon Conference East entering the fall 2021 high school football season. At the bottom is Mike Wilson’s predicted order of finish.

1. Does anything about the Northwest Oregon Conference East look predictable this season?

Let’s see. Redmond, the ostensible NWOC East champion in the spring, has a new coach, one who is returning to the position after a move from the same area he left when he first took the job of coaching the Panthers in 2018. Perennial contender Pendleton lost its projected starting quarterback for at least half of the season because of a knee injury. La Salle Prep changed coaches … and then did it again, and the Falcons aren’t returning all of their eligible players from the spring. Players who were among Class 5A spring leaders in passing, rushing and receiving aren’t around anymore, nor is a dominant offensive lineman who made the rare NWOC-to-Pac-12 leap and is at Oregon State. The conference’s most recruited player in the class of 2022 left the state after one high school season and returned to Washington. Three of the eight teams have first-year coaches, and another school has a coach in his second season in charge.

No. The answer to the question is no.

2. Is this the season Putnam breaks out of the two-win cycle?

The Kingsmen of Milwaukie have won two games in each of the past three seasons. There is justifiable optimism about the program this season, generated by higher turnout, returning experience and heightened expectations among players. “With the experience that we have,” coach Tim Jacobs said, “we’re going to have a fighting chance at reaching some of those goals that the kids have.”

3. Does the long trip to Pendleton play into a home-field advantage for the Buckaroos?

NWOC East schools in the Portland area are more than 200 miles from Pendleton. Redmond and neighboring Ridgeview have about a 250-mile one-way journey to play road games against the Buckaroos. Since Pendleton joined the Class 5A NWOC East for the 2018 season, it is 10-1 in home games during the regular season. Part of that might be attributable to visitors having a long trip, but a bigger part might just be that during these years, Pendleton has been among the top Class 5A teams in Oregon, not just the NWOC East.

4. What does Brent Wasche’s return as Redmond coach mean?

For one thing, it means a continuation of one of the oddest coaching odysseys on record. Wasche came to Redmond from Port Angeles, Washington, in 2018. He coached the Panthers for one season before leaving for … Port Angeles. After working there for two years, Wasche left Port Angeles for … Redmond.

Redmond’s class of 2022 players were freshmen when Wasche was head coach, and in his first stint with the Panthers, the program experienced a sizable increase in turnout. At the end of the spring season, Redmond looked able to go toe-to-toe with any other Class 5A team in Oregon, led by a defense that pitched four shutouts in six games and an offense guided by the experienced Hayden Parrish at quarterback. Assuming he stays longer than one season, Wasche appears to have the chance to help further build the Redmond program.

5. What signs are there that Parkrose’s offense will be more productive?

Coach Brian Jackson expects his interior linemen to be among this season’s leaders. That should bode well for the offense as a whole after a spring season in which the Broncos of Northeast Portland were shut out twice and exceeded 13 points once (against one-win Madison). If the offensive line delivers as hoped, points should be easier to come by this season.

6. How will Hood River Valley adjust to its key losses?

The Eagles lost three massively important players from last season: two-way first-team all-NWOC East selections Henry Buckles, Emilio Castaneda and Tanner Fletcher. Without the likes of Buckles (now at Oregon State) and Castaneda to plow running lanes for Fletcher or any other ball carrier, the Eagles’ offensive approach will change. “I always try for balance — I think balance is essential,” coach Caleb Sperry said. “You also have to take advantage of your assets. I think ours lie in our perimeter players.”

7. What effect will the vast changes at La Salle Prep have?

The Falcons of Milwaukie lost coach Aaron Hazel, who had led the program at his alma mater for six seasons. Then the school’s first choice to succeed Hazel unexpectedly backpedaled and resigned from the job in July for private reasons. La Salle Prep lost to graduation quarterback Ryan Rosumny, the NWOC East offensive player of the year. Two standouts with eligibility remaining — Riley Peterson and Brody Crowley — decided to leave the program. Dustin Janz, who resigned as Oregon City’s coach after the spring season and was ticketed for an assistant’s role with the Falcons, is now the head coach. He’s rolling with everything and sees a positive to having limited time in the summer overseeing the program. “We can’t overthink things,” he said. “We can’t overcomplicate things. We just have to keep things simple and keep them moving forward, control what we control and then we’ll be OK.”

8. Can Ridgeview progress to where the Ravens close the deal this season?

How close were the Ravens (2-4 in the spring) to a winning record? They lost their finale by two points after having possession with barely a minute to play. In their Week 2 game against Pendleton, they led 12-0 at halftime before losing 20-12. Another of Ridgeview’s losses was to Class 6A Mountain View of Bend, which was undefeated in the spring. If the Ravens of Redmond can come out on the plus side of coin-flip games this season, they could be fighting for an OSAA Class 5A playoff spot.

9. How far can the front lines take The Dalles?

The strongest parts of The Dalles’ generally thin roster appear to be the offensive and defensive lines. Center Joe Codding earned all-NWOC East honorable mention as a sophomore, and juniors Marquies Sagapolutele and Myoah I’aulualo will be relied on heavily as well.

10. Should we just hand NWOC East defensive player of the year to Pendleton’s Kyle Liscom already?

The linebacker won the honor as a junior after the spring season, which followed a sophomore year in which he led the Buckaroos in tackles. There doesn’t seem much that would stop him from winning the honor as a senior. “He’s definitely a top-end player statewide,” coach Erik Davis said. On the other side of the ball, there is much less clarity. La Salle Prep quarterback Ryan Rosumny, the offensive NWOC East player of the year in the spring, has graduated. One logical choice is Redmond senior quarterback Hayden Parrish, whose starting experience dates to his freshman season. Pendleton quarterback Jackson Davis would have been a contender, but he’ll miss at least the first half of the regular season with a knee injury suffered in the spring.