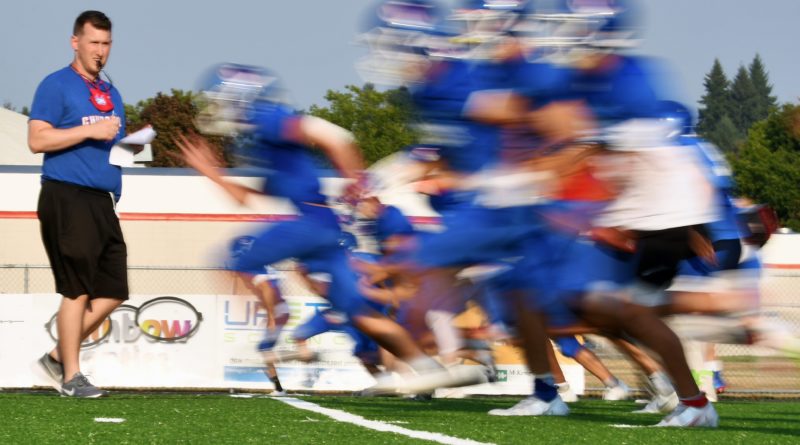 Here are 10 questions for the Class 5A Midwestern League entering the fall 2021 high school football season. At the bottom is Jarrid Denney’s predicted order of finish.

1. Can anybody catch Thurston?

Before the pandemic struck, Thurston was dominating the 5A landscape, winning back-to-back state titles. Now, the Colts have a group that is loaded with as much top-end talent as those two championship teams were. There are still some questions to be answered, though. Thurston is replacing its entire offensive line, and the team will have a new quarterback. Also, the Colts have paused all football activities because of a COVID outbreak. As long as they are able to resume their season relatively soon, they have every reason to believe another league title — and possibly much more — is within reach.

If the rest of the Midwestern League is chasing Thurston, Churchill might be the team that is best equipped to track down the Colts. The Lancers have an embarrassment of riches in terms of talent and experience along the offensive and defensive lines, and that could make them a difficult matchup for Thurston’s relatively inexperienced offensive front. Churchill also has uber-talented skill position players all over the field. According to head coach AJ Robinson, however, this season’s Churchill team will need to do a much better job of meshing than last season’s group did. If that happens, the rest of the league could be in trouble.

3. Which of the first-year starting quarterbacks will have the greatest impact?

There is a possibility that all eight teams in the league could be starting a new quarterback in the first game of the season. That’s a bit of a statistical anomaly, and it could make for a chaotic season across the board. Churchill, Springfield and a few other teams bring back signal-callers who played during the pandemic-shortened spring season, and it is possible those players are again under center. But every Midwestern League team at least had an open quarterback competition during the summer. It could be that whichever teams are able to settle in behind their quarterback the quickest will be best positioned for a postseason run.

The last time Crater took the field in a “normal” season, the Comets came just five agonizing points from winning a 5A state title. Since then, so much has changed for the program. Head coach Randy Waite left, and longtime assistant Berk Brown is at the helm. The Comets had a relatively successful spring season and beat up on some traditionally strong 6A opponents. But for the second year in a row, they graduated a boatload of key contributors; five players from last season’s team are now playing college football. Brown, though, believes the pillars that helped Crater find so much success two seasons ago still are present. The Comets could be a state title contender once again if they are able to jell quickly and get the most out of their gifted playmakers.

5. With Kevin Leonard at the helm, can Willamette continue its recent success?

Leonard has a long coaching career in the Eugene area, and now he’s in his first season as head coach at Willamette. The Wolverines are coming off their best season since 2015 and return a bunch of talent on both sides of the ball. They were one win from a league title last spring and did so with just four seniors. Finding a way to replace quarterback Dane Woodcook and running back Bryce Indell won’t be easy, but they have one of the best players in the state in Griffen Bushnell and a talented, experienced group surrounding him that could continue to thrive under Leonard’s “family mentality.”

6. Will the state take notice of Springfield’s Connor Dye?

“If he was at Sheldon right now, you would be hearing all about him,” Springfield coach Miles Haley said of the Millers’ sophomore running back, Connor Dye. That statement speaks volumes to Dye’s talent and work ethic — and points out just how head-scratching it is that he is flying under the radar heading into his sophomore season. One of the most talented players in Oregon in the class of 2024, Dye was a second-team all-league running back as a freshman. There aren’t many freshmen in the Midwestern League capable of getting varsity snaps; Dye not only started for the Millers, he thrived. Now that he has a chance to play a full high school season, the rest of the state could start to realize just how talented and skilled Springfield’s sophomore running back is.

7. Will Eagle Point’s experience allow it to thrive early?

Eagle Point returns eight starters on offense and seven on defense. In a league filled with young teams that have questions to answer, the Eagles will be one of the most experienced teams around. That’s a stark contrast to head coach Erik Johnson’s first season with the program, when Eagle Point had just a handful of seniors who had played competitive football. Last season, they brought up a large group of players from JV and got them some valuable experience. Churchill is on the schedule for Week 1, and the Lancers will provide a measuring stick for just how much they’ve improved.

8. Will North Bend’s young squad break through this season?

North Bend is bringing back one of its smallest senior classes in recent memory. But what they lack in senior experience, the Bulldogs make up for with an electric group of juniors and sophomores who aren’t interested in waiting until next year to make their mark in the Midwestern League. David Roberts, Kavan Robinson and Sam Mickelson are part of a talented nucleus of players who will make a major impact for North Bend over the next few seasons. If all goes well this season, they might even fight for a spot at the top of the league standings a year ahead of schedule.

9. Will Ashland carry momentum from the spring?

After a 2019 season in which it was one of the best teams in 5A, Ashland’s program was drastically affected by the pandemic. The Grizzlies ultimately played a JV schedule in the spring to protect a roster that was low on numbers and experience. The situation wasn’t ideal, but it was crucial to ensure that players would get the reps they needed to continue progressing. The Grizzlies enter this season with talent all over the field, and they will lean on the experience from the spring to help rebuild the program from the ground up. That could include contending for a playoff spot sooner rather than later.

10. How many Midwestern teams have a legitimate shot at a playoff spot?

Year in and year out, the Midwestern League delivers a handful of the top teams in the state. Look no further than 2019, when Thurston and Crater played for a state title, and Ashland (6) and North Bend (9) finished in the top-10 of the 5A rankings. This season, though, the league might have as much parity as it has in recent memory. Thurston might still have more talent on paper than any of its league rivals, but the new-look Colts have plenty to prove. After the top spot, the teams could finish in any order, really. It’s easy to imagine any of the eight teams emerging from the pandemic, playing great football and fighting for a postseason spot in late October.