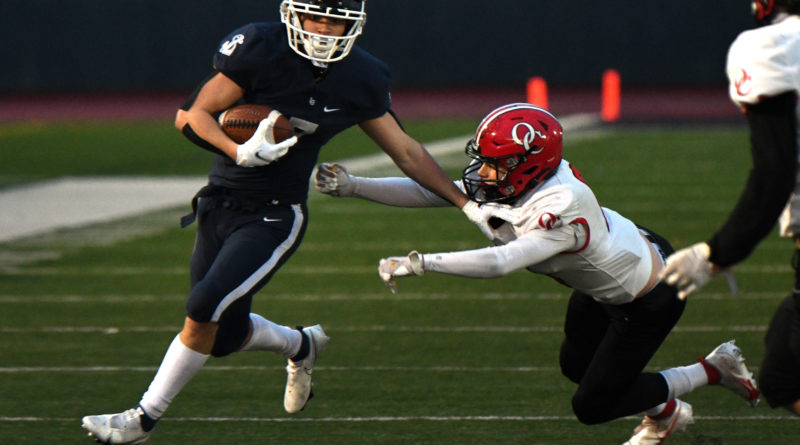 Now we want to hear from you: Who will prove himself this season as the best player in the 6A Three Rivers League? Cast your vote below and let us know who you think will be the Three Rivers’ top star in the fall of 2021.

WR/S Dylan Layne, Sr., Lake Oswego: Layne, who last season earned all-TRL recognition on offense (honorable mention) and defense (second team), is one of the team’s most versatile players. He has drawn interest from several schools, including offers from Eastern Washington and Valparaiso of the FCS. (Lake Oswego season preview)

RB/CB Gabe Olvera, Sr., Lake Oswego: Olvera got his chance to start toward the end of his sophomore season, when the Lakers moved two-time state player of the year Casey Filkins to a single-wing quarterback. He ran for 157 yards in a first-round playoff win over Grants Pass and helped Lake Oswego reach the final, and he started all four games in the spring, earning first-team all-TRL honors. Halberg loves Olvera’s versatility and ability to catch the ball out of the backfield. “He will be a guy that moves around a lot offensively,” Halberg said. “He is a big play waiting to happen.” (Lake Oswego season preview)

C Austin Leykam, Sr., Lake Oswego: Leykam will be a three-year starter on the offensive line. He earned second-team all-Three Rivers honors as a junior and has received an offer from Lewis & Clark. (Lake Oswego season preview)

OL/DL Gavin McGuire, Sr., Lake Oswego: McGuire is another player who broke through during the Lakers’ run to the 2019 state final and continued his strong play during the spring season, receiving all-TRL honorable mention on defense. “Gavin has really developed as a leader of the team,” Halberg said. “He will be one of the most valuable players on our team, and it will be hard to get him off the field.” (Lake Oswego season preview)

S Jake Reichle, Sr., Lakeridge: Reichle, a transfer from Wilsonville as a freshman, made an immediate impact in his first season as a starter for the Pacers, finishing with a team-high 87 tackles, two interceptions and two pass breakups in earning first-team all-Three Rivers and second-team SBLive Oregon all-state honors. (Lakeridge season preview)

TE/DE Nui Tovey, Sr., Lakeridge: Tovey was one of the most dominant linemen in 6A during the spring season, finishing with 51 tackles (nine for loss), two sacks, nine hurries and six pass breakups. He was named to the all-TRL first team and the SBLive Oregon all-state third team. With the graduation of Oregon State-bound tight end Bryce Caufield, he will get more time on offense this season. (Lakeridge season preview)

WR/TE Joey Olsen, So., Lakeridge: The short spring season allowed coach Spencer Phillips to break in several freshmen and see how they fare under the Friday night lights. Olsen might have been the most accomplished of the group, making the all-Three Rivers first team and sharing the team lead with four touchdown catches among his 22 receptions for 347 yards. As he matures, tight end might become his best position. (Lakeridge season preview)

QB Ryan Oliver, Jr., Lakeridge: Oliver hardly looked like a sophomore in his first season as the Pacers’ starting quarterback — he completed nearly 65 percent of his passes (94 of 145) for 1,197 yards and 12 touchdowns (two interceptions) in making the all-TRL second team. Oliver accomplished this despite switching throwing hands before the season. (Lakeridge season preview)

WR/DB Joey Shaw, Sr., Oregon City: Shaw might be the most accomplished player returning for the Pioneers. He made the all-Three Rivers first team at receiver last season after catching 26 passes (second on the team to Jahleel Heath’s 30) for 277 yards and a touchdown, and he was a second-team selection at safety. (Oregon City season preview)

WR/DB Cade Heitschmidt, Sr., Oregon City: Heitschmidt went from JV starter to varsity playoff starter during his sophomore season, and he continued that upward career track in the spring, catching 20 passes for 130 yards and a touchdown in earning all-league honorable mention at receiver. He also was a second-team all-TRL kick returner. (Oregon City season preview)

WR/CB AJ Perez, Jr., Tigard: Perez stepped into starting roles on both sides of the ball as a sophomore and had an immediate impact, receiving all-TRL honorable mention at receiver and cornerback. (Tigard season preview)

WR/S Karson Boschma, Sr., Tigard: The Tigers were cautious with Boschma after he suffered a hip injury during the run-up to the spring season, limiting him to offense, where he earned all-TRL honorable mention. He’ll be a key two-way player this fall. (Tigard season preview)

TE/OLB Elijah Jackman, Sr., Tigard: Jackman last season made the all-TRL second team on defense and received honorable mention on offense. A physical presence who can set the perimeter on either side of the ball, he has drawn interest from several Northwest Division II and III schools. Jackman also shined during the track season, winning the district title in the discus and placing third at the 6A Showcase. (Tigard season preview)

OL/DL Leif Beers, Sr., Tigard: John Kemper was the offensive line coach before taking over head coaching duties three years ago, and he takes pride in how every year, the Tigers seem to churn out another standout lineman who goes on to play in college. Beers looks to claim that role after receiving all-TRL first-team recognition on offense and second-team honors on defense as a junior. (Tigard season preview)

WR/DB Cole Prusia, Sr., Tualatin: Prusia might have been Oregon’s breakthrough star of the 2021 spring season. He went from a little-known honorable mention defensive back as a sophomore to the state’s Gatorade Player of the Year and the Three Rivers League offensive player of the year as a junior. He caught 34 passes for 524 yards and nine touchdowns and vaulted to No. 5 on 247Sports’ statewide recruiting list (No. 6 on ESPN). (Tualatin season preview)

QB Jackson Jones, Sr., Tualatin: Jones took over in the spring after serving as Blake Jackson’s understudy as a sophomore. Like Prusia, he has seen his profile blow up over the past several months. The first-team all-TRL quarterback completed more than 59 percent of his passes (93 of 157) for 1,348 yards and 16 touchdowns (four interceptions), then completed a strong body of offseason work with a stellar performance at the Northwest 9 Showcase in Yakima. (Tualatin season preview)

RB/S Malik Ross, Sr., Tualatin: Ross is an electrifying talent who makes plays in all three phases of the game, earning first-team all-TRL honors on offense (406 yards and five touchdowns on 27 carries) and as a kick returner (23.3 yards per kickoff return, 11.3 per punt return) and garnering second-team recognition on defense. (Tualatin season preview)

DE Richie Anderson, Jr., Tualatin: Anderson had a stellar debut season with the Timberwolves, making the all-TRL second team. He’s ranked the No. 4 recruit in the state for the class of 2023 by 247Sports. (Tualatin season preview)

RB/S Mark Hamper, Jr., West Linn: Hamper received all-Three Rivers honorable mention on both sides of the ball in his debut season with the Lions at wide receiver (23 catches for 323 yards and two touchdowns) and outside linebacker (26 tackles, three tackles for loss, three pass breakups, one interception). He’ll move to safety and get time at running back and receiver to take advantage of his athleticism and position flexibility. (West Linn season preview)

RB/DB Koffi Kouame, Jr., West Linn: Kouame, who started for Beaverton in the spring, transferred to West Linn in early August, joining an already loaded backfield. Kouame ran for a season-high 155 yards against Sunset in Week 4 and finished the season with 421 yards and three touchdowns on 88 carries and 71 yards on nine receptions. (West Linn season preview)