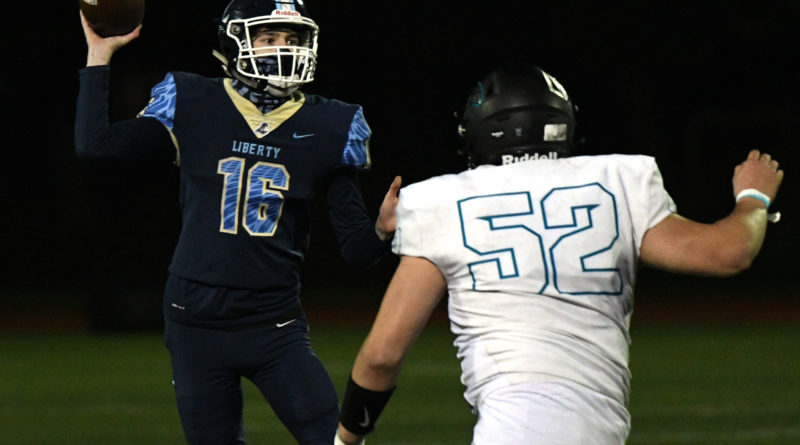 Now we want to hear from you: Who will prove himself this season as the best player in the 6A Pacific Conference? Cast your vote below and let us know who you think will be the Pacific’s top star in the fall of 2021.

RB/LB Elijah Garcia, Jr., Century: Garcia split time in the backfield with Emilio Hernandez last season, earning all-Pacific honorable mention while rushing for 231 yards and a touchdown on 46 carries. “He is a power runner who looks really good during summer workouts,” coach Danny Kernan said. “He will lead our backfield this fall.” (Century season preview)

WR/SS Preston Springer, Sr., Century: Springer was one of the team’s top contributors as a junior, leading the Jaguars with 14 catches for 220 yards and two touchdowns and earning second-team all-conference honors at safety, intercepting three passes and making 23 tackles (two for loss). “He has put in a lot of work this offseason,” Kernan said. “We are asking him to be the leader in our secondary as well as make plays for us on offense.” (Century season preview)

QB Tyler Mahlman, Sr., Century: Mahlman was an all-Pacific receiver in the spring but will transition to quarterback, taking over for Zach Boehler and already drawing interest from Augsburg College, a Division III school in Minneapolis. (Century season preview)

QB/LB Royce Fasel, Sr., Glencoe: Fasel has been “the man” in the Crimson Tide program since arriving on campus as a freshman, making the Class 6A all-state team at linebacker as a sophomore and last season moving from running back to quarterback in Week 4 to power a late-season charge which included wins over McMinnville and Franklin. Fasel, who has 255 career tackles, was a first-team all-Pacific selection on both sides of the ball as a junior and made the SBLive Oregon all-state second team at linebacker. (Glencoe season preview)

TE/DE Zack Schlottmann, Sr., Glencoe: Schlottmann is a triple threat in the Glencoe lineup, making the all-conference second team on the defensive line and receiving honorable mention at kicker and tight end. He showed his readiness for the fall campaign with a dominant performance at the Metro Area Lineman Challenge, winning four categories and earning MVP honors. (Glencoe season preview)

TE/DL Ben Thornbrue, Sr., Glencoe: Thornbrue is better known as a post player on the basketball court, twice making the all-Pacific team on the hardwood, but coach Ian Reynoso thinks he is ready to blossom as a football player after making the all-conference second team on defense in the spring. (Glencoe season preview)

RB/LB Nate Smith, Jr., Liberty: As a sophomore, Smith established himself as a presence at middle linebacker with 13 tackles in the Falcons’ season opener, and by season’s end, he’d made his way onto the all-Pacific second team, finishing with 29 tackles and two interceptions. He ran for 167 yards and a touchdown and caught seven passes out of the backfield. “He’s a smart, hard-working, determined player,” coach Eric Mahlum said. “He will do what it takes to get the job done.” (Liberty season preview)

WR/DB Ethan Jones, Sr., Liberty: Jones also got off to a big start to the spring season with seven catches for 89 yards and a touchdown, but a non-football medical issue sidelined him for the final two weeks. He received all-Pacific honorable mention at receiver with 13 catches for 178 yards and three touchdowns, and he made 13 tackles in the secondary. “A playmaker on both sides of the ball,” Mahlum said. (Liberty season preview)

QB Hiro Diamond, Sr., Liberty: Diamond is back for his third season starting under center after a junior campaign for which he received second-team all-Pacific recognition, completing 57.9 percent of his passes (44 of 76) for 526 yards and four touchdowns with five interceptions. He rushed for 284 yards and five scores. (Liberty season preview)

QB Ky Hoskinson, Sr., McMinnville: Hoskinson sat out the spring season as he prepared for a junior baseball season that saw him earn Pacific Conference pitcher of the year honors. The Cal State Bakersfield baseball commit can now focus on his return to the gridiron, where he was an honorable mention selection as a sophomore. (McMinnville season preview)

RB Price Pothier, Sr., Newberg: It might seem like Pothier has been around forever for the Tigers — the reigning Pacific Conference offensive player of the year has had an impact on the program since cracking the lineup as a freshman. He ran for 757 yards and 10 touchdowns last season on 93 carries, putting him at 2,013 yards for his career. (Newberg season preview)

RB/LB Hudson Davis, Jr., Newberg: Davis returns to the gridiron fresh off winning a 6A wrestling state title in June and earning All-American status with a sixth-place finish at 182 pounds at the 16U Greco-Roman National Championships in Fargo, N.D. As a sophomore, he made the all-Pacific second team on both sides of the ball, rushing for 263 yards and four touchdowns and making 27 tackles. (Newberg season preview)

QB/FS Bjorn Bergstrom, Sr., Sherwood: Bergstrom brings one of the few things the Bowmen lack this season — experience. A three-year starter in their wing-T attack that should see only minor tweaks with Kevin Hastin taking over from longtime coach Greg Lawrence, Bergstrom received all-Pacific honorable mention in the spring and will compete for a starting spot at free safety. (Sherwood season preview)

WR/DB Cody Hall, Sr., Sherwood: Hall last season made his biggest mark on special teams, where he was a first-team all-conference kick returner, but he also earned all-conference honorable mention at cornerback. He’ll be one of Bergstrom’s top targets on the outside. “He’s a big-play threat out at receiver,” Hastin said. “We know what he can do. He can fly. He has big-play speed, and he’s definitely going to stretch the defense and run by people.” (Sherwood season preview)