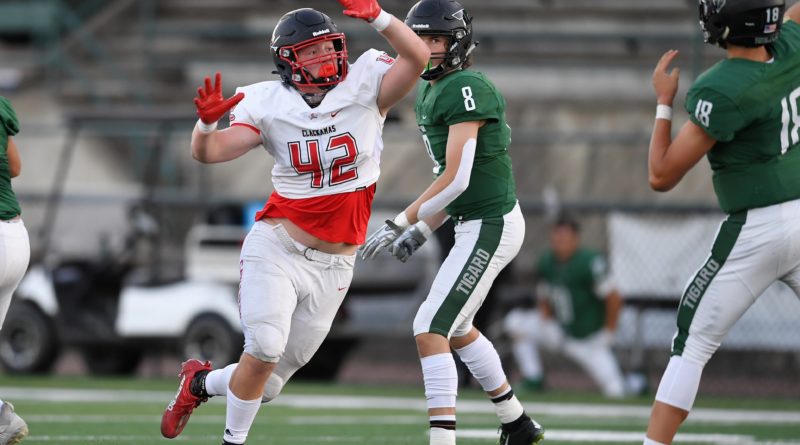 By René Ferrán and Mike Wilson

Now we want to hear from you: Who will prove himself this season as the best player in the 6A Mt. Hood Conference? Cast your vote below and let us know who you think will be the Mt. Hood’s top star in the fall of 2021.

TE/RB/LB Andrew Collins, Sr., Barlow: Collins stood out on defense as a junior, setting the stage for what could be a monster senior season. Collins could play at tight end or running back on offense. (Barlow season preview)

QB Hayden Boyd, Jr., Centennial: Boyd was ticketed to play wide receiver in the spring season but was moved to quarterback after presumptive starter Langston Williams-Lomax moved to Texas. He has put in the work in the offseason to prepare for what could be a big junior year for the Eagles. (Centennial season preview)

LB Jacques Poirier, Jr., Centennial: At the end of the spring season, teammates voted Poirier a team captain. Eagles coach Butch Self called Poirier the team’s emotional leader, and his selflessness is demonstrated by his willingness to switch positions in the spring, from fullback to guard, because of a shortage of linemen. (Centennial season preview)

OL Dennis Allen, Jr., Centennial: Allen was unable to play in the spring season on account of foot surgery, but he remained a part of the team and was a regular at practices. Allen is in the range of 6-feet-4 and 260 pounds and armed with what might be regarded as deceptive athleticism, and he has the potential to attract attention from college recruiters. (Centennial season preview)

WR/DB Jordan King, Sr., Central Catholic: The 6-foot-4, 205-pound King brings size, a physical element and dependable hands to the Rams’ passing game. In the six-game spring season, he had 28 receptions for 452 yards and seven touchdowns — the team leader (by far) in all three categories. (Central Catholic season preview)

RB/WR/DB Zach Grisham, Sr., Central Catholic: Grisham is a third-year varsity player with the versatility to do a lot of things and the talent to do them all well. In the spring season, he tied for second on the team in receiving and had the third-most carries. He had the second-most tackles on the team and had two interceptions. (Central Catholic season preview)

LB/TE Emar’rion Winston, Sr., Central Catholic: Winston has made a nonbinding oral commitment to Oregon. The 6-4, 240-pounder is expected to be a force at outside linebacker, and he’s also ticketed to play some tight end. (Central Catholic season preview)

WR/DB Stryder Todd-Fields, Sr., Central Catholic: Todd-Fields will be the team’s lockdown cornerback, but that shouldn’t diminish the offensive contributions he made in the spring. He caught the go-ahead touchdown pass in the fourth quarter of the Rams’ 14-7 win at Clackamas, a week after hauling in a scoring pass in a 21-7 win over Barlow. (Central Catholic season preview)

TE/LB Riley Williams, Jr., Central Catholic: Williams is probably the best-known player on the Rams among the college recruiting crowd. The 6-7, 235-pounder has a dozen scholarship offers from across the country. Williams can line up at tight end and wide receiver on offense and at outside linebacker on defense. (Central Catholic season preview)

OL Kage Casey, Sr., Clackamas: The 6-foot-6, 272-pound Casey has committed to Boise State. He’ll play left tackle and help pave a path for the Cavaliers’ running game, which last season averaged more than 156 yards per game against one of the stiffest schedules of any Class 6A school. (Clackamas season preview)

OL/DL Logan Chastain, Sr., Clackamas: Chastain started both ways as a junior and turned in what coach James Holan called an all-state-caliber season on the defensive line. (Clackamas season preview)

RB/S Luke Ash, Jr., Clackamas: After rushing for a total of 75 yards in the first two games of the spring season, Ash tore through defenses in the final four weeks. He gained 646 yards (7.9 yards per carry) and rushed for nine touchdowns in the Cavaliers’ last four games, including scoring all four of the team’s touchdowns in the finale at Tigard. He probably will get more time on defense at safety than he did as a sophomore. (Clackamas season preview)

TE/LB Kaden Ludwick, Sr., Clackamas: The 6-5, 245-pound Ludwick has committed to Colorado as a linebacker. Last season, he led Clackamas in tackles for loss and tied for the lead in sacks, despite missing the season finale. He’ll also have more of a role at tight end this season. (Clackamas season preview)

WR/CB K.J. Johnson-Gibson, Sr., Clackamas: Johnson-Gibson (6 feet, 175 pounds) tied for second in Class 6A in the spring with four interceptions. The Cavaliers are counting on him for more standout play on defense and plan to give him an increased role on offense. (Clackamas season preview)

RB/DB Jaden Poulshock, Sr., David Douglas: Poulshock will be a third-year starter on both sides of the ball who brings speed and strength to bear. As a sophomore in 2019, he was the second-leading rusher for the Scots, averaging 9.3 yards per carry en route to totaling 411 yards and rushing for three scores. (David Douglas season preview)

RB/LB Caleb Clardy, Jr., David Douglas: Clardy (6-1, 185) transferred from the Seattle area before last season and made a strong impression — beyond just the David Douglas campus — with his play. Scots coach Cal Szueber called him one of the best players in the Mt. Hood Conference and said a lot of 7-on-7 teams have recruited him. (David Douglas season preview)

OL/DL Colton Gaffney, Jr., Gresham: Gaffney (6-feet-4, 230 pounds) is among the Gophers’ leading returning tacklers and is a team captain as a junior. (Gresham season preview)

QB Zach Kaufman, Sr., Gresham: Kaufman, a team captain, returns as the starting quarterback. “He has a good arm and a calm demeanor,” said first-year coach James Allen, whose new offensive scheme will feature moving the pocket and RPOs. “I have no doubts that Zach will be able to pick up our new offense quickly.” (Gresham season preview)

WR/DB Max Kirsch, Jr., Nelson: Kirsch is a high-energy, intense player who brings to the football field the athleticism borne of playing multiple sports. Kirsch is part of a core of juniors who will build the foundation for Nelson football for years to come. (Nelson season preview)

WR/DB Reid Gray, Jr., Nelson: Gray, who played varsity basketball at Clackamas as a sophomore, is projected to play as a slot receiver and a cornerback. He has shown a physicality that belies his size. (Nelson season preview)

WR/LB Miles Baldwin, Sr., Reynolds: Baldwin returns after leading the then-run-heavy Raiders of Troutdale with two touchdown catches in the spring. At 6-3, 200 pounds, he’s a big target who is a good route runner. (Reynolds season preview)

QB Teague Clemmer, Sr., Sandy: In an already shortened junior season (because of the COVID-19 pandemic), Clemmer’s availability was truncated further by an injury. But what he showed in the two games he did get to play in the spring was tantalizing. He completed 26 of 47 passes (55 percent) with four touchdowns and no interceptions. (Sandy season preview)

WR/DB Ashton Turin, Sr., Sandy: Turin plays much bigger than his 5-10, 165 pounds would lead one to believe. He will be a playmaker in the passing game with his speed and physicality. (Sandy season preview)

TE/FS Leithan Thompson, Jr., Sandy: Thompson started three of last season’s four games at outside linebacker and this season will be moved back to free safety. With the Pioneers featuring a tight end, the 6-3, 185-pound Thompson will make an inviting target in the passing game as well. (Sandy season preview)