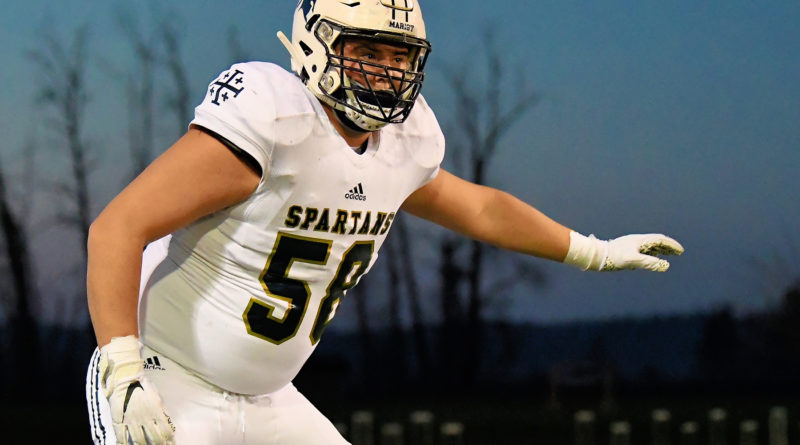 By René Ferrán and Jarrid Denney

Now we want to hear from you: Who will prove himself this season as the best player in the 4A Sky Em League? Cast your vote below and let us know who you think will be the Sky Em’s top star in the fall of 2021.

OL/DL Ayden Freeman, Sr., Cottage Grove: When coach Joe Polamalu arrived at Cottage Grove, Freeman was one of the players he said immediately caught his eye. Freeman will provide a boost in the trenches for the Lions on both sides of the ball. (Cottage Grove season preview)

RB/LB Parker Nelson, Jr., Cottage Grove: Cottage Grove will continue to operate out of a spread offense this season, as it has in the past. Nelson will be a key part of the attack. He’s dealt with some injuries, but he could be a major asset at running back during his junior season. (Cottage Grove season preview)

QB Ian Drago, Sr., Elmira: Drago will have some big shoes to fill as he attempts to replace last season’s starter, Cobyn Herbert, but Drago served as the backup in the spring and will guide an offense that will be substantially younger than it was last season. (Elmira season preview)

OL/DL James Evans, Sr., Elmira: Evans was second-team all-league on both sides of the ball last season and is the leader of a talented, experienced offensive line. He will slot in at right tackle on offense and defensive tackle on defense. (Elmira season preview)

OL/DL Luke Wolgamott, Jr., Elmira: Wolgamott will play next to Evans at right guard and could make an impact on the defensive line. He was a physical presence for the Falcons as a sophomore and figures to take a massive leap as he takes on a larger role. (Elmira season preview)

RB/LB Lucas Tuski, Sr., Marist Catholic: Tuski isn’t just one of the top players for the Spartans; he is one of the top returning players in the state — at any level. He was a workhorse in the backfield last season, carrying the ball 105 times for 717 yards and 12 touchdowns, and his impact at linebacker was just as significant. (Marist Catholic season preview)

OL/DL Kale Paslay, Sr., Marist Catholic: Paslay played with Tuski in the 2021 Les Schwab Bowl and is back for what could be a massive senior season. A two-way star for the Spartans on the offensive and defensive lines, he has been a force for the past two years and the team’s emotional leader. (Marist Catholic season preview)

OL/DL Tanner Relling, Sr., Marist Catholic: As a sophomore, Relling was an impact player at halfback, but during the pandemic, he grew 2½ inches, added around 50 pounds and completely transformed himself as a football player. Now, he’s returning for his senior year after earning all-state honors at offensive line as a junior. (Marist Catholic season preview)

QB/DB Carter Greene, Sr., Marist Catholic: Greene nearly won the quarterback job as a junior. He ultimately lost out to Joey Laing, but the Spartans still had several packages where they put Greene under center to take advantage of his elite athleticism. This season, he will be Marist Catholic’s full-time quarterback and could add an entirely new dimension to the offense. (Marist Catholic season preview)

RB/LB Wolfgang Betts, Sr., Marist Catholic: Even with the massive talent the Spartans had across the board last season, Betts was their second-leading tackler as a junior with 29. He also tallied 3.5 sacks — good for fourth in 4A. He will be the lynchpin of Marist Catholic’s defense as he looks to build on his stellar junior campaign. (Marist Catholic season preview)

QB Dom Montiel, Sr., Marshfield: In Montiel, the Pirates return arguably the top quarterback in 4A. Statistically speaking, Montiel was in a class of his own as a junior. He passed for 1,711 yards — nearly 300 more than any other player in 4A — and a state-best 22 touchdowns against four interceptions. (Marshfield season preview)

RB/LB Ezra Waterman, Sr., Marshfield: Waterman has been the heart and soul of Marshfield’s defense the past few seasons. The 74 tackles he tallied in the spring were the second-most in 4A, and he led the state with 13 tackles for loss. (Marshfield season preview)

WR/DB DJ Daugherty, Sr., Marshfield: As a junior, Daugherty reeled in five interceptions — tied for the most in 4A. He could play an equally significant role for Marshfield on offense after catching 33 passes for 412 yards and a 4A-leading 10 touchdowns last season. (Marshfield season preview)

WR/DE Pierce Davidson, Sr., Marshfield: The Pirates have a plethora of versatile offensive weapons, and Davidson might be the most unique of them all. At 6-foot-6, he was strong enough to start at defensive end last season and athletic enough to play wideout, finishing with 33 catches for 465 yards and four touchdowns. (Marshfield season preview)

WR/DB Maddux Mateski, Sr., Marshfield: Mateski is another long, athletic receiver who fits seamlessly into Marshfield’s offensive scheme. A second-team all-league selection as a junior, he could be in store for a breakthrough season this fall. (Marshfield season preview)

WR/DB Nolan Wyers, Sr., North Eugene: Wyers was a North Eugene co-MVP last season and a major difference-maker on both sides of the ball. He had 26 receptions for 400 yards, ranking among the top 10 in 4A in both categories. An ultra-speedy, athletic pass-catcher, he placed third in the 100-meter dash at the 5A state track meet in the spring. (North Eugene season preview)

QB/K Cade Johannsen, Sr., North Eugene: The Highlanders will have one of the most intriguing quarterback battles in the state taking place this season. Johannsen served as backup to A.J. Anderson last season and pushed the former North Eugene signal-caller hard in camp for the starting job. At 6-foot-8, Johannsen has tremendous field vision and a stellar arm. He’s also getting Division I looks as a kicker and punter. (North Eugene season preview)

QB/CB Devon Anderson, Jr., North Eugene: The younger brother of last season’s starting quarterback, Devon Anderson is a super athletic, versatile player who will help the Highlanders in several ways. He will compete for the starting quarterback job and will add a layer to the team’s running game if he wins. As a sophomore, he occasionally operated out of the Wildcat formation. He could be a weapon at running back if Johannsen wins the job. He also might start at cornerback. (North Eugene season preview)

RB/LB Michael Warren, Sr., North Eugene: Warren partnered with Zion Puha to form one of the most formidable linebacker duos in the state last season. He was second-team all-league as a junior, racking up 37 tackles (six for loss) and three sacks. (North Eugene season preview)