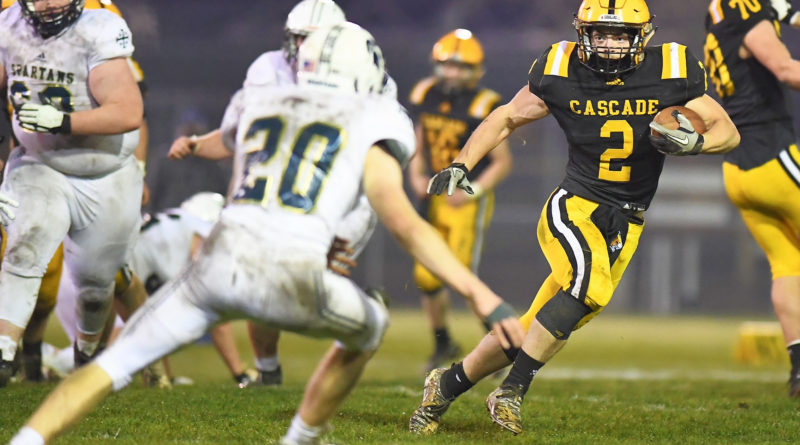 By René Ferrán and Paul Valencia

Now we want to hear from you: Who will prove himself this season as the best player in the 4A Oregon West Conference? Cast your vote below and let us know who you think will be the Oregon West’s top star in the fall of 2021.

QB/DB Jacob Hage, Sr., Cascade: At 5-8, 170 pounds, Hage is pure toughness and an all-state candidate as a dual-threat quarterback. As a junior, he threw for 837 yards on 47-of-87 passing with five touchdowns, and he ran for 475 yards and eight scores. He also plays defense as a lockdown cornerback. (Cascade season preview)

RB/LB Blake Lewis, Sr., Cascade: Lewis is one of the best two-way players in 4A, a four-year starter at linebacker who made the all-state second team in the spring with 51 tackles (seven for loss) and four sacks. He led the Cougars with 485 rushing yards (10.4 per carry) and eight touchdowns. (Cascade season preview)

RB/LB Lance Van Hoose, Sr., Cascade: If Lewis is the thunder in Cascade’s running game, that makes Van Hoose the lightning bolt. Quick. Elusive. He had a 200-yard rushing game in the spring and finished with 438 yards and three touchdowns. He is a sack machine on defense, getting four among his 35 tackles (seven for loss). (Cascade season preview)

WR/DB/K Colin Smittle, Sr., Cascade: Smittle averaged nearly 20 yards per reception in the spring, finishing with 15 catches for 294 yards and two touchdowns. He also is a powerful tool on special teams as a kicker. (Cascade season preview)

QB Markus Everitt, Jr., Newport: Everitt is a three-sport athlete, also playing baseball and basketball at Newport, and he shined in his first season as starting quarterback playing nine-man football because of county restrictions. He completed 66 percent of his passes (31 of 47) for 607 yards and six touchdowns. (Newport season preview)

WR/DB Kaden Bruns, Sr., Newport: As a wingback, Bruns will catch the ball or run the ball. The Cubs have to get the ball in Bruns’ hands after seeing him average nearly 17 yards per catch in the spring. (Newport season preview)

QB/DB Eli Brown, Jr., Stayton: Brown has been a varsity player since he was a freshman. He is vying for the starting quarterback spot and is locked in at safety. His strengths as a signal-caller are his ability to run the ball as well as his physical toughness. (Stayton season preview)

TE/LB Brock Hubert, Jr., Stayton: Hubert passes the eyeball test with his 6-5, 270-pound frame. On defense, let’s call him a linebacker for now, but he can play anywhere the coaching staff puts him. In the spring, dealing with COVID, there were a lot of lineup changes. Hubert played nose tackle, outside linebacker and inside linebacker. (Stayton season preview)

RB/DB Daniel Luttrell, Sr., Sweet Home: Adams calls Luttrell “a next-level kid” who stands out not only for his obvious talent, but also his leadership. (Sweet Home season preview)

OL/DL Tucker Weld, Sr., Sweet Home: A lineman at heart but he will play some at linebacker, too. That’s the type of player Weld is, doing whatever he can to help the team. “He’s got a passion and fire for football. He wants to win,” Adams said. “He’s going to be the Hoorah leader, getting people where they need to be and doing what it takes to win.” (Sweet Home season preview)

RB/DB/K Tomas Veliz, Sr., Woodburn: Veliz last season received all-conference recognition as a receiver, where he caught 12 passes for 222 yards and two touchdowns. He’s listed as a running back this season, and he showed he can capably replace second-team all-state back Cole Beyer by gaining 245 yards on 62 carries in the spring. (Woodburn season preview)