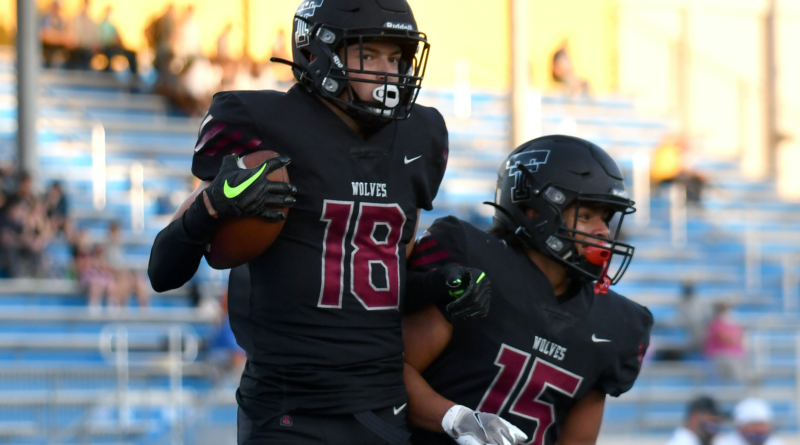 Here are 10 questions for the Class 6A Three Rivers League entering the fall 2021 high school football season. At the bottom is René Ferrán’s predicted order of finish.

1. Who are the favorites for league offensive player of the year?

Mark Hamper, RB/WR, West Linn: Hamper could split time between receiver, where he was an all-TRL honorable mention selection as a sophomore, and running back, where he’d form part of a backfield committee looking to replace the production of OSU walk-on Gavin Haines and Johns Hopkins signee Cole Peters.

Gabe Olvera, RB, Lake Oswego: The Lakers see Olvera as capable of producing big numbers in their offense this fall — probably not as prolific as those put up by two-time state offensive player of the year Casey Filkins, but certainly big enough to carry the offensive load and propel them on another deep playoff run.

Cole Prusia, WR, Tualatin: What can the reigning league offensive player of the year do for an encore? He’s part of a three-headed offensive juggernaut with classmates Jackson Jones at quarterback and Malik Ross at running back that has the Timberwolves entering the season as the Class 6A title favorite in the minds of many.

2. Who are the favorites for league defensive player of the year?

Earl Ingle, LB, West Linn: The rare freshman who cracked the rotation at West Linn, Ingle became a fixture in the starting lineup and dominated from the get-go during the spring, making 36 tackles (six for loss) and three sacks and forcing two fumbles in earning first-team all-Three Rivers and second-team SBLive Oregon all-state honors at outside linebacker.

Elijah Jackman, LB, Tigard: Jackman is starting to draw interest from Northwest colleges after a standout junior season for the Tigers in which he earned second-team all-TRL honors as an outside linebacker who can set the perimeter against the run or pressure the quarterback.

Jake Reichle, S, Lakeridge: A transfer from Wilsonville as a freshman, Reichle made an immediate impact in his first season as a starter for the Pacers, finishing with a team-high 87 tackles, two interceptions and two pass breakups in earning first-team all-Three Rivers and second-team SBLive Oregon all-state honors.

3. Who are the best players in the league that casual fans might not have heard of … yet?

Dane Sorensen, C/DL, Oregon City: The Pioneers junior excels as a long snapper, a position most fans notice only when things go wrong. He’ll also hold down the starting center job on offense, putting him in the middle of the action anytime Oregon City has the football.

Manny Wilder, C/NG, Tigard: Wilder last season took over at center after all-state senior Edward Beglaryan suffered a season-ending injury while attending an offseason recruiting showcase. He made the all-TRL honorable mention list in the spring and will help anchor the line with fellow senior Leif Beers this fall.

Lucas Reininga, WR, West Linn: With the Lions’ surplus of skill position talent last spring, Reininga got lost in the shuffle a bit, but he was a stellar possession receiver, making eight catches for 86 yards. He received all-league honorable mention. Expect him to become a favorite target for whoever wins the quarterback job.

4. Who is the player most likely to enjoy a breakthrough season?

There are a number of really good candidates around the league, but we’ll go with Lake Oswego senior Jack Layne, who hasn’t played a lot of quarterback in the past but showed tremendous improvement during the spring season. Getting those four games under his belt “was massive for his development,” said Lakers offensive coordinator Nick Halberg. After another summer honing his craft, and with loads of skill position talent surrounding him, Layne should bust out in his final high school season.

5. Which quarterback has the biggest shoes to fill?

Half of the six teams in the league are replacing their starters, but none was more productive than West Linn’s Blake DeBisschop, an SBLive Oregon first-team all-state selection who played his way into a preferred walk-on spot at Cal-Berkeley. Three players entered camp vying to take over for him, and it promised to be a spirited competition between Ingle, senior Chase Harman and sophomore Nick Sakys.

6. Who is the next sophomore to become a star in the league?

The shortened spring season allowed Lakeridge coach Spencer Phillips to break several freshmen into the lineup and see how they’d fare under the glare of the Friday night lights. Wide receiver Joey Olsen might have been the most accomplished of the group, making the all-Three Rivers first team in his first season, and as he matures, tight end might become his best position. The recruiting website 247Sports recently announced its initial list of Top 100 players for the class of 2024, and Olsen made the cut at No. 72, tops among Oregon players. He’s listed as a four-star recruit.

7. How much will West Linn look back on the pandemic season as a missed opportunity?

Not as much as you might think. The players took the lost chance at winning a state championship in stride, and Lions coach Chris Miller bought the players No. 1 rings to commemorate their dominant season. While many fans might knock West Linn down a peg after graduating such a talented senior class, don’t sleep on the Lions’ chances at winning a blue trophy this fall. They might be untested at some positions, but the addition of Beaverton transfer Koffi Kouame solidifies them at running back, and if they get their bearings through a difficult opening stretch, they have the potential to make a deep run through the bracket.

8. Is this the year Lakeridge turns potential into a league title?

We posed that question in our headline when we posted the team preview, because it does seem like every year, this question gets asked. The short answer is no. As you’ll soon see, we pick the Pacers to finish fifth. The long answer is that with the Three Rivers as loaded as ever, with three teams among our preseason top six, it’s going to be near impossible for teams in the bottom half to make a move. However, it would not surprise us one bit to see Lakeridge advance to the quarterfinals for the second time in the past three years with a record around .500.

9. What will it take to awaken the ‘sleeping giant’ that is Oregon City?

It was just six years ago that the Pioneers finished second in the Mt. Hood Conference and reached the state quarterfinals. But since returning to the Three Rivers in 2018, they’ve won only one game in league play — and that was against Canby, which dropped to Class 5A in 2020 because of its own recent struggles. The infrastructure is in place in a single-high-school Portland suburb for success, but like with Lakeridge, trying to make headway in a league as rugged and deep as the Three Rivers will always be difficult. First-year coach Shane Hedrick isn’t daunted by the challenge, and he’ll implement a power running attack this fall to try to turn things around.

10. How many playoff teams come out of the Three Rivers League?

It would be a shock if any fewer than five teams make the bracket from the league, and all five that we see making the cut could easily win twice and make it to the quarterfinals, with three of them among our favorites to bring home the blue trophy in December. Would we be surprised if Oregon City made it a clean sweep and put all six teams in the field? Not at all, although the Pioneers will need to run the table in nonleague play against Westview, Franklin, McMinnville and Century to have a chance.