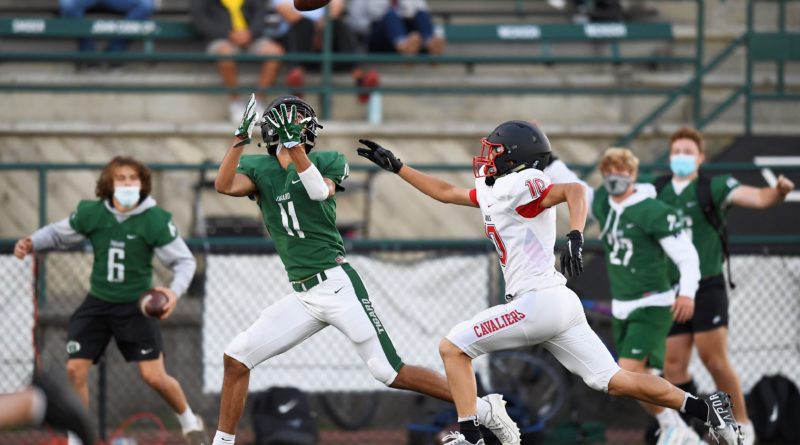 During the shortened spring football season, we focused our top 25 games to highlight regional rivalries. The fall season, though, will have league and state championships up for grabs. So, when the season kicks off Thursday, how each game affects teams’ title hopes will be foremost on our minds.

Here are 25 can’t-miss games on the schedule this Oregon high school football season.

This season opener will feature two of the spring’s breakthrough teams. The Tigers were 5-1, knocking off Pacific Conference rival Sherwood before losing to West Linn in the culminating week, while West Salem won the Salem city championship and finished 6-0.

Week 2 features this intriguing matchup between the spring’s Class 4A (Mazama) and 3A (Cascade Christian) unofficial state champions.

The spring’s No. 2 and No. 3 teams in the 4A committee’s rankings both reside in the Sky Em League, and this season finale should determine the league champion and a top-3 seed in the state playoffs.

While the Titans won the Salem city championship, Mountain View won the Bend city championship, sweeping a double round robin with Bend and Summit en route to a 6-0 record. Back together in the Mountain Valley Conference, this midseason tilt could have major title ramifications.

The Skyline Conference championship should come down to three teams, and two of the top contenders meet here. Mustangs quarterback Nate Vidlak might be one of the most underrated players in the state.

This Thursday night tilt matches two of the top contenders in the Northwest Oregon East Division and offers Portland-area fans an opportunity to see Buckaroos senior Kyle Liscom, one of the best linebackers in Oregon.

The Mid-Willamette Conference title race might be as wide-open as it’s ever been, and the Bulldogs and Foxes figure to be right in the middle of it with two of Class 5A’s top quarterbacks in West Albany’s Michael Cale and Silverton’s Jordan McCarty.

The Lions graduated a deep and talented senior class from a team that dominated the spring season and will bring an inexperienced but talented group to Cronin Stadium for the programs’ second regular-season meeting (the other? 1975). The last time these teams met was in the 2015 Class 6A state final, won by the Crusaders 21-14 for the last of their six titles.

The annual Black and Blue Bowl will play a key role in determining the Southwest Conference champion — although Sheldon will have something to say about who ultimately wins the title.

The favorites in the Northwest Oregon Conference West Division meet in the season finale. It’ll be one of the last chances to see Cougars senior Jacob Strand before he’s playing Saturdays at Oregon State.

Mazama won the spring’s 4A Showcase championship, but Marshfield and senior quarterback Dom Montiel enter the fall campaign as the title favorites in the minds of many.

These North Portland rivals have been the PIL’s top teams the past two years. Led by senior safety and Oregon commit Trejon Williams, the Democrats could end the Generals’ two-year reign atop the league and earn their first PIL title since 2011.

Could this be the start of Oregon’s next great rivalry? Clackamas becomes a two-high-school town this season when Nelson opens, and former teammates will battle for the first time in Week 4.

This Klamath Basin rivalry always has an impact on the Skyline Conference championship, and this season should be no exception. A Hornets victory in both teams’ conference opener would go a long way toward ending the Vikings’ seven-year reign atop the standings and leading to Henley’s first title since 2013.

This Midwestern League rivalry game is a rematch of the 2019 Class 5A final, narrowly won by the Colts to give them back-to-back state titles.

This is the matchup many onlookers wanted to see at the end of the spring campaign, when both teams finished 6-0 and had the look and feel of the two best teams in the pandemic season.

The Papermakers open the season with four consecutive matchups with Oregon opponents. The first one pits the last state champions crowned in the Northwest’s top classifications, with the Washington 4A champions crossing the river to face the 2019 Class 6A champion Rams.

The Apollos snapped a 26-game losing streak to their Metro League rivals during their undefeated spring season. The Crusaders likely haven’t forgotten the Sunset players, many of whom return this fall, celebrating in front of the scoreboard following the 31-14 victory.

The Tigers announced themselves during the spring by knocking off Sherwood for the first time since the Bowmen moved up to Class 6A in 2014. Since then, they watched their coach, Kevin Hastin, take over at their Highway 99 rival, sprinkling a little extra spice into this matchup.

The Timberwolves are one of the top teams in the Northwest and feature perhaps Oregon’s best quarterback-running back-receiver trio, but this district rivalry has been lights-out (literally) in the past and it should be a fun Week 9 matchup with Three Rivers League title ramifications.

This matchup of top Three Rivers teams promises a lot of offensive fireworks. The Lions emphatically put an end to their three-game losing streak in the series during the spring with a 42-7 rout that the Lakers surely will be looking to avenge.

The Timberwolves will be motivated to avenge a 36-7 loss to the Lakers in their spring finale. If Tualatin truly fancies itself a Three Rivers and 6A title contender, this is a must-win game.

Since the Cavaliers joined the Mt. Hood Conference in 2014, either they or the Rams have won the conference title every season — including when they shared the crown in 2016. This regular-season finale should determine the championship yet again.

This matchup is on a Saturday as the Lions share Wilsonville’s stadium this season while theirs undergoes renovations. That allows the spotlight to shine exclusively on last season’s consensus No. 1 team in Class 6A as it takes on one of this season’s favorites in a massive Three Rivers tilt.