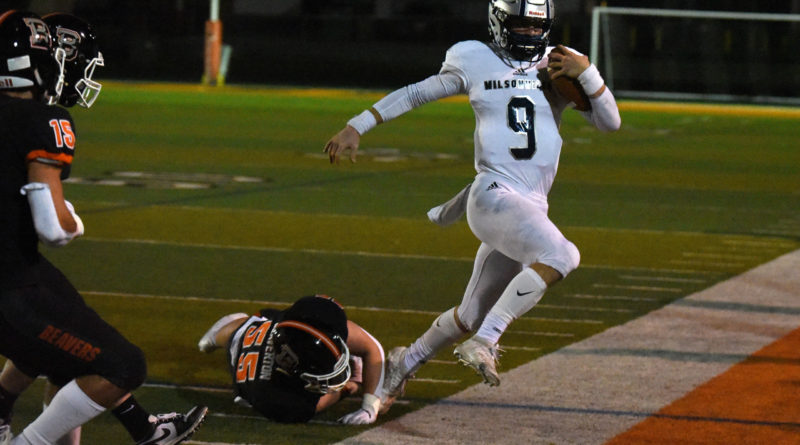 SBLive Oregon will break down every 6A, 5A and 4A team in the state leading up to the 2021 fall football season. Here’s our look at the Wilsonville Wildcats of the Class 5A Northwest Oregon Conference West Division.

Johnson will play the pivotal strong safety position in the Wildcats’ 3-4-4 defense. “He can play coverage, he can come up and fill as a linebacker,” Guenther said. “We expect big things out of him.” Playing at weakside outside linebacker last season, Johnson was among the team leaders in tackles. (He is Wilsonville’s top returning tackler this season). His two forced fumbles were second-most on the team. “This year,” Guenther said, “he’s going to be more of the strong safety guy who’s all over the place. He’s going to be the kid we ask to do a lot.” Johnson also will be expected to spearhead the Wildcats’ receivers. Wilsonville graduated its top seven receivers, who accounted for all 14 of the team’s touchdown catches in the spring season.

Beecham is the other returning starter on defense. He is the second-leading returning tackler and forced three fumbles (recovering two of them). “He plays hard and plays fast and tracks down anybody and everybody,” Guenther said. “Hopefully he can pick up where he left off last year.”

Green got some time on defense as a junior, but he was stuck behind a unit that was nearly impenetrable for opponents. “Our starters let up one touchdown” in the spring, Guenther said. With the Wildcats losing nine of 11 starters from last season, the opening for Green is a little wider than it was in the spring, and Guenther said he expects Green to play a bigger role.

“He played a little bit of everything for us last year,” Guenther said, and as a senior Cooper is targeted for an inside linebacker position. Cooper (6-0, 200 pounds) is the team’s third-leading returning tackler, behind Johnson and Beecham. “He’s going to be a big deal,” Guenther said.

Hix began the spring season as the starting quarterback, but he sustained an injury in Week 2 and didn’t play the rest of the season. He was a backup and had a bit of playing time as a sophomore, so this is his third varsity season. Even limited to one-plus game as a junior, he offered a glimpse of what he can do, passing for 401 yards with five touchdowns and three interceptions in victories over Scappoose and Class 6A Beaverton. “He’s had a good summer,” Guenther said. “He’s healthy and throwing the ball well.” The Wildcats have averaged 260 yards passing per game over the past three seasons, and Guenther said expectations are high for Hix to carry on the team’s tradition of being able to throw the ball effectively.

Starters at 19 of the 22 offensive and defensive positions from the spring are gone, leaving a lot of questions for Wilsonville. If the program’s recent history and coach Adam Guenther’s assessment mean anything, though, the questions aren’t necessarily “How well can the new players keep the success going?” as much as “Who among the new players will keep the success going?”

“We have a lot of good, talented athletes — who are unproven,” Guenther said. “This year more than any other year, it’s a matter of who’s going to step up.”

The Wildcats entered preseason camp with starting positions available for the taking virtually everywhere on the field. Despite the losses to graduation, Guenther said, the team in fact has decent depth at some positions, such as at linebacker and defensive back. There’s not much difference, he said, between those who might be projected starters as camp kicks in and those who looked in early August like reserves.

“It’s going to be who works harder, who understands it better, who plays fastest,” he said.

On both sides of the ball, Guenther said, the lines are question marks.

“We’re asking a few kids to play roles they don’t normally play, for the betterment of the team — which is our culture,” he said.

No player who caught more than five passes in the spring is back, but there is a line of players — untested — ready to take their shot. And the Wildcats, who had two running backs in the spring, have six this season — none of them, though, with a lot of varsity experience.

“Which one is it going to be?” Guenther asked rhetorically. “We’ll let you know by Week 3,” after a jamboree and two nonconference games.

Had there been a normal high school football season in the 2020-21 school year, Wilsonville probably would have been among the last teams standing. It’s natural to expect a fall-off after such a dominant stretch, given the cyclical nature of high school football.

Wilsonville, though, seems immune to fall-offs. The Wildcats will probably remain the toughest game on the schedule of each of their Northwest Oregon Conference West opponents. Anything less than another conference championship would be a surprise, and at least a couple of wins in the OSAA Class 5A playoffs also seem likely.