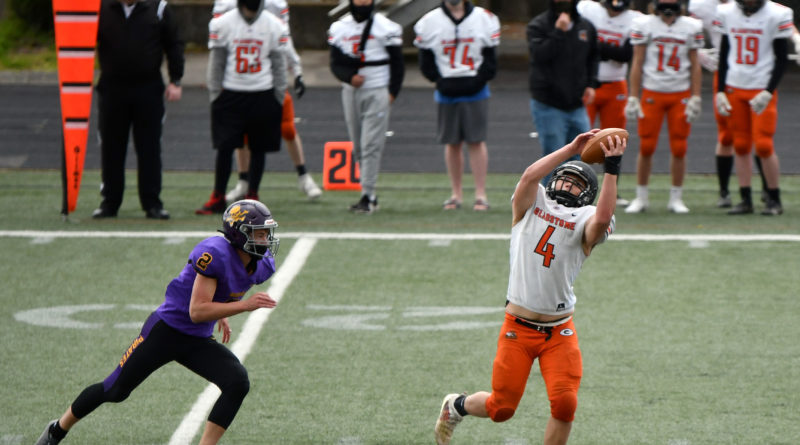 SBLive Oregon will break down every 6A, 5A and 4A team in the state leading up to the 2021 fall football season. Here’s our look at the Gladstone Gladiators of the Class 4A Tri-Valley Conference.

Strong enough to put him in the inside but he also is the team’s best edge rusher.

Finnigan had eight tackles for loss in the abbreviated spring season. On offense, look for Finnigan as a tight end or the rare H-back. Sommer wants to move him around, calling Finnigan a “very complete football player.”

A defensive back who has been moved to linebacker. In the new defense, the linebackers have to be the best communicators, and Smith is just that — a leader.

On offense, expect Smith to have a breakthrough season as a receiver.

“Last year, we struggled a bit throwing the ball,” Sommer said. “This year, we are much more confident and comfortable in our passing game. Hayden will be a big part of that.”

The Gladiators were patient with their quarterback of the future during the spring season. The coaches waited until Owen seemed comfortable and prepared. They found the right time. Owen had four touchdown passes in the league title-clinching victory. The future is now.

“His ability to throw the football and understand what we’re trying to do with all 11 guys in the formation, it’s beautiful to see,” Sommer said. “He’s done a great job.”

A well-rounded athlete with a great combination of strength and speed.

“With the tweaks we’ve made in our offense, it will allow him to play more freely. The faster he plays, the better we are as a football team,” Sommer said. “He’s definitely one of our leaders and one of our best athletes.”

On defense, Brechbiel had three interceptions in a part-time role as a linebacker in the spring.

“The energy he brings to practice every day is contagious,” Sommer said. “He lets you know the second you see him, he’s ready to go.”

Finch was a backup quarterback last spring, but he has made the move to slot receiver. Sommer said it was a smooth transition.

The coaches wanted to ease him into varsity action when he was a sophomore.

“He sprinted through that timeline. He became one of our best football players by Week 2 or Week 3,” Sommer said. “Every week, he made more plays and made his presence felt.”

Daves has the potential to be really special. Sommer said Daves is “just trying to discover what he can do with all of his tools. It’s been really cool to see.”

Sommer is a Gladstone graduate. He was the offensive coordinator last season, and now he is the head coach. Oh, and this is not a steppingstone for him.

“It means something to me. I view this as a permanent home,” Sommer said. “I want to build a program from where I’m from.”

Sommer’s goal is to give the players the best experience possible, recalling fond memories of his time at Gladstone as a student-athlete.

Of course, in order to stay long, Sommer will have to succeed. No, it’s not a win-at-all-cost mentality. But it is reality. Gotta win more than you lose, in the long run.

“My expectations are to build off of that,” Sommer said. “I believe we are a state contender.”

This team has a great combination.

The team’s speed is its strength. And not just the skill guys. Gladstone is fast in space and “in a phone booth,” Sommer said.

The coach likes having the flexibility to adapt during a game, the ability for the offense and defense to make quick adjustments if needed.

As a team in the Portland area with some added restrictions in the past year, the Gladiators might not have had as much time in the weight room as some of the programs outside the metro area. Sommer said his players will be playing catch-up in the weight room.

Fortunately, his players are athletic and self-motivated. He expects them to catch up in a hurry, just like they arrived at varsity football in a hurry.

“The coolest part about being back is being around the kids and seeing just how much it means, not only to them, but the community. Gladstone is a huge, huge football community. It’s nice to see familiar faces, being outside, and enjoying the sport of football.” — Cam Sommer