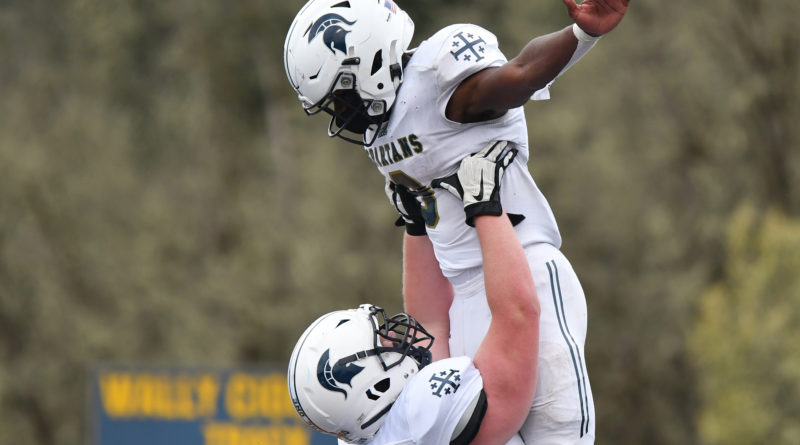 SBLive Oregon will break down every 6A, 5A and 4A team in the state leading up to the 2021 fall football season. Here’s our look at the Marist Catholic Spartans of the Class 4A Sky Em League.

Tuski isn’t just one of the top players for Marist Catholic; he is one of the top returning players in the state — at any level. Only two players in 4A ran for more yards last season, and only one scored more rushing touchdowns. His impact at linebacker was just as significant, and Geske believes there is plenty more to come. “He’s kind of transformed himself,” Geske said. “He’s a heck of a lot faster and he’s dropped about another 10 pounds. He’s running a legit 4.5, 4.6 in the 40-yard dash. He’s going to have a great year.”

Paslay played with Tuski in the 2021 Les Schwab Bowl and is back for what could be a massive senior season. A two-way star for the Spartans on the offensive and defensive lines, he has been a force for the past two years and is the team’s emotional leader. “He’s strong, aggressive and motivated,” Geske said. “He’s got good size.”

As a sophomore, Relling was an impact player at halfback. But during the pandemic, he grew two-and-a-half inches, added around 50 pounds and completely transformed himself as a football player. Now, he’s returning for his senior year after earning all-state honors at offensive line as a junior. “He and Kale push each other in practice,” Geske said. “They’re great friends and great teammates.”

Greene nearly won the quarterback job as a junior. He ultimately lost out to Joey Laing, but the Spartans still had several packages where they put Greene under center to take advantage of his elite athleticism. This season, he will be Marist Catholic’s full-time quarterback and could add an entirely new dimension to the offense. “Carter’s an athlete — there’s no doubt about it,” Geske said. “I really thought he would be the starter a year ago. Joey just did such a great job with leadership … but Carter has got a load of talent. I’m excited to see what he can do this year.”

Even with the massive talent the Spartans had across the board last season, Betts was their second-leading tackler as a junior. He also tallied 3.5 sacks — good for fourth in 4A. He will be the lynchpin of Marist Catholic’s defense as he looks to build on his stellar junior campaign.

Ayoma was the Spartans’ other starting running back last spring and might have been lost in the shuffle a bit because of the star power the team had on offense. He’ll form an imposing backfield duo with Tuski and could be in store for a major breakthrough season.

The Spartans came agonizingly close to an unofficial state title during the condensed spring season, falling 27-21 to Mazama in the 4A Showcase championship game.

They lost quite a bit of talent from that team, but they still return plenty of firepower on both sides of the ball.

As it turns out, one of the few teams that might be able to stop them this season resides in their league.

“Marshfield returns everybody. They’re legit,” Geske said. “I have a hard time disagreeing with people that pick them for the league title. But I think between the two of us, it’s going to be a lot of fun.”

Marist Catholic returns a group of talented seniors who have been there and done that. The only thing their prep resumes are missing is a state title.

In Tuski, the Spartans have one of the best offensive weapons in the state, and the talent they have in the trenches will cause nightmares for opponents.

They will travel to Marshfield in the final week of the regular season and play what could be one of the must-see games on the Oregon high school football calendar. For now, though, they are focused on taking care of business between now and then.

“It’s not the exact same high expectations that we had a year ago with that group,” Geske said. “But I think we’re going to be every bit as good if we can get a couple guys to fill in some of those key senior spots.”

“At every program, you get seniors displaying that want-to factor that maybe was missing before. That’s got me excited about this year with these guys. I think we’re overall faster than we were a year ago.” — Frank Geske