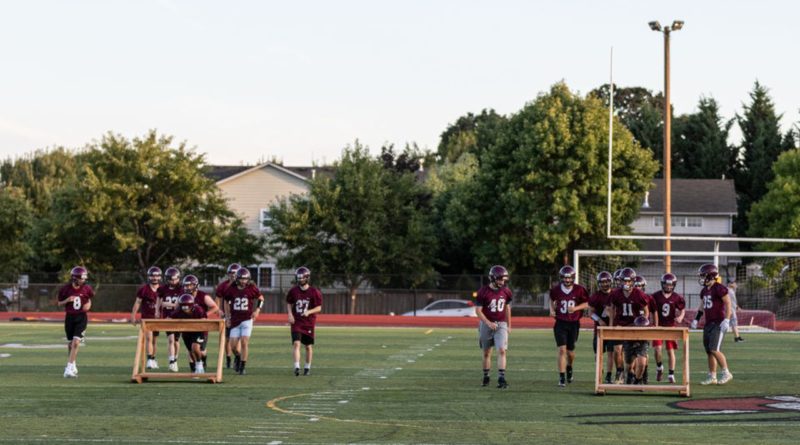 SBLive Oregon will break down every 6A, 5A and 4A team in the state leading up to the 2021 fall football season. Here’s our look at the Forest Grove Vikings of the Class 5A Northwest Oregon Conference West Division.

Steltenpohl is a returning starter on offense and is ticketed to play the Y receiver in the Vikings’ new spread, no-huddle offense. Ferraro said the position demands versatility. The player must be able to play tight to the formation with a hand on the ground and split wide from the formation to a receiver spot, allowing different looks without changing personnel on a given drive. Steltenpohl, a rangy 6-foot-3, brings good speed to the field. “The most important thing I like about him is he’s committed to being a good teammate and being a leader in our senior class,” Ferraro said, adding that opponents shouldn’t sleep on him when he’s playing defense. “I think he’s going to give our opponents a little bit of trouble coming off the edge.” Steltenpohl ranked second on the team in tackles for loss in the spring season.

Johnson had the second-most carries and the second-most rushing yards on the team in the spring season. “David’s done a really good job this summer in our summer workouts and passing league,” Ferraro said. “You can see the improvement with him every day. During our passing league, he’s shown consistent performance on both sides of the ball.” Johnson is a sprinter and jumper on the Vikings’ track team, and Ferraro said his track speed is noticeable on the football field. “He just doesn’t really say much,” Ferraro said. “He just quietly goes about his work.”

Frohnert is a returning two-way starter. In the spring, he led the team in tackles from his linebacker spot. “He was a key contributor last year,” Ferraro said. “I think he’ll be a key contributor this year.” Frohnert played wing last season and will be in the top rotation of receivers in the fall. “He’s a tough kid,” Ferraro said. “He gives great, consistent effort all the time.”

Blanton received limited varsity action last season. “He is one of our toughest kids,” Ferraro said, attributing that quality at least in part to Blanton’s competing as a wrestler. “You can see that toughness in every rep he takes.” Between Blanton and Johnson, Ferraro said, the Vikings will have a good 1-2 punch at running back.

The Vikings were winless in the spring, getting shut out in three of their six games, as the program continued a fall from an OSAA Class 5A playoff berth two seasons prior.

Ferraro, offensive coordinator at Sunset the previous five years, was hired to succeed Perry Herbst (11-32 in five seasons). Ferraro said one of his goals is obtaining heightened commitment from players toward the program, indicated by things such as more consistent turnout to offseason workouts.

The work ethic and engagement of players who are at workouts, he said, has been a plus.

“They have each other’s back, and they definitely show and verbalize that enthusiasm on a regular basis in practice,” he said. “They bring a lot of juice and energy to our practices and our workouts. I like seeing that.”

“Our goal is to play fast,” he said. “We might have some challenges with that depth-wise. We’ll just have to be the best-conditioned team in the state to do it.”

“Kaden has all the physical tools,” Ferraro said. “Austin doesn’t necessarily have all of the physical tools that Kaden has, but he has some decision-making that you see come through in the heat of the moment.

“Both are doing a really good job. It’s just that they’re drinking out of a firehose right now.”

Ferraro singled out five more seniors who are expected to contribute this season: Kaden Clute (slot receiver and linebacker); Trevor Cannon (wide receiver/defensive back), who last played organized football in eighth grade; Gavin Hale and Kyle Ulloa (both wide receiver/defensive back); and Aden Silva (offensive and defensive lineman), the only returning starter on the offensive line.

“Trevor’s been one of the guys who’s really bought in to the program since he came out back in July,” Ferraro said.

Ferraro said he has three goals for his first season. The first is having players build a strong commitment to the team and each other.

“I look at what we did at Sunset last year,” Ferraro said, alluding to the Apollos’ 6-0 record (which included wins over Jesuit and Central Catholic), “and I truly believe we don’t beat some of those teams that we beat if we weren’t committed to each other. That’s a huge part that I want to figure out. And we’re getting there.”

The second goal is giving maximum effort and competing — and learning how to compete.

The third goal is for the players to have fun and let others know they love football.

“The game is hard. It’s a tough sport. It’s not for everybody,” Ferraro said. “We’re really trying to get these guys to realize, if you love something, you should show it. If you love football, which I think our guys do, show it. Let everybody know you love it and you love your teammates.

“They’re getting it. We’re not perfect at those three things, but we’re improving, and that’s a positive.”

It’s probably too much to expect more than a couple of wins by Forest Grove this season, but making ground toward Ferraro’s vision and goals would be signs of progress.