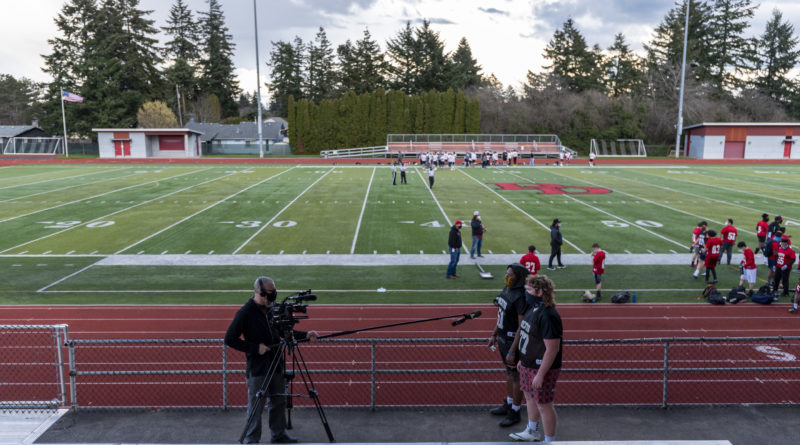 SBLive Oregon will break down every 6A, 5A and 4A team in the state leading up to the 2021 fall football season. Here’s our look at the David Douglas Scots of the Class 6A Mt. Hood Conference.

Poulshock will be a third-year starter on both sides of the ball who brings speed and strength to bear. As a sophomore in 2019, he was the second-leading rusher for the Scots of Southeast Portland, averaging 9.3 yards per carry en route to totaling 411 yards and rushing for three scores. “He brings that valuable experience as a senior this year,” Szueber said. “I think he’s one of the better running backs that we have in terms of quickness and knack for the game.”

A 4.0 grade-point-average student, Laban supplements his smarts with strength and speed. He can play running back or fullback in the Scots’ offense. In the spring, Laban stepped into the middle linebacker position, and Szueber said Laban is the best he’s had at the position in several years. “He has a knack for the game,” Szueber said. “He reads the plays well side-to-side. I think he’s going to be a pretty good linebacker in the Mt. Hood Conference.”

Clardy (6-1, 185) transferred from the Seattle area before last season and made a strong impression — beyond just the David Douglas campus — with his play. Szueber called him one of the best players in the Mt. Hood Conference and said a lot of seven-on-seven teams have recruited him. “He’s got that football IQ,” Szueber said in praise of the hard-hitting linebacker. “He will definitely be playing at the next level.”

The 6-foot-2, 245-pound Brown will start on both lines, something he has been doing since about the midway point of his sophomore season. Szueber said Brown’s body is still developing as his strength gets better and better. “I think he’s going to be a force,” Szueber said.

Cashdollar (5-10, 210) returns as a starter on both lines, where he was the younger of two Cashdollars up front (older brother Micah was a three-year starting two-way lineman who was a senior in the spring). “His strength is going to be at offensive guard,” Szueber said. “I like guards who are athletic. He’s got strength, size and athleticism to play on our offensive line.”

Wade started at linebacker in the spring and, Szueber said, was a bit of a surprise with what the coach called outstanding play. “He has a knack for the ball, is always around the ball,” Szueber said. “I think he’s going to be good for us this year.” Wade also got considerable action at running back among a rotation of players at the position.

Another 4.0 student, Caesar was a defensive starter as a sophomore. “I think he’s going to excel on defense,” Szueber said, adding that Caesar also will be in the mix at running back or fullback. “He’s a hard worker,” Szueber said, “so we’re expecting big things from him this year.” Szueber said Caesar is 5-11 and 185 pounds — down a little as he lost weight to try to improve his athleticism.

Scott was a part-time starter at defensive back as a freshman and was in the rotation at running back. This season, he’s projected to move to wide receiver on offense and will be, Szueber said, a lockdown cornerback. Szueber said Scott stood out during summer seven-on-seven events. “He’s a tremendous athlete,” Szueber said. “We’re looking for good things from him.”

Stapleman has what Szueber called a Division I body at 6-4, 275 pounds. And, the coach said, he’s getting stronger. Stapleman started last season at center. “As a junior we’re expecting even bigger things from him,” Szueber said.

David Douglas lost four seniors from the team it fielded in spring, which means plenty of experienced players return.

As preseason camp started, the quarterback situation was undecided. Senior James Hubbard (a pitcher on the school’s baseball team) was the leading candidate and appeared to have the edge, but sophomore David Franco and junior Amare Tanner were under consideration.

“There’s going to be some competition there,” Szueber said.

“We gained valuable experience in the spring,” he said, “as we have a great group of linebackers.”

Szueber said the Scots’ goals include an OSAA Class 6A playoff spot. They finished 2019, Szueber’s first season, with a 4-5 record and 38th in the final OSAA rankings — meaning they were probably one win from making the 32-team field.

The Mt. Hood Conference’s top three teams automatically qualify for the playoffs this season, and the consensus is that the trio of Barlow, Clackamas and Central Catholic have essentially built a moat around themselves and the rest of the conference. So, if David Douglas is to make the playoffs, it could quite possibly come down to OSAA rankings again.

Szueber identified the offensive line, where three of five starters return, as a key position group.

“It’s going to depend on how we develop our linemen and our depth there,” Szueber said. “We’ll go as far as that takes us.”

Although some programs around the state have had declining numbers of players, Szueber has been encouraged by all three of the freshman classes that have come through in his time. That should pay off this season and down the road with depth and in-house competition.

“We need to stay relatively healthy and settle the quarterback position. We also need to solidify our offensive line. We have three returning starters from the spring but are unsure of who will step up in the other two positions.” — Cal Szueber