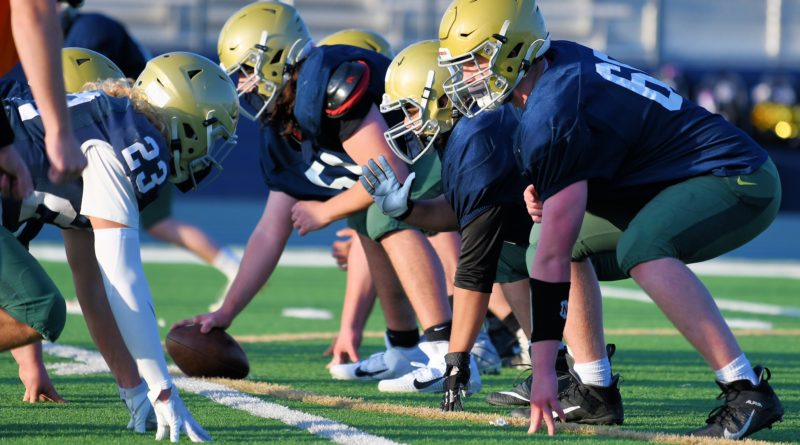 SBLive Oregon will break down every 6A, 5A and 4A team in the state leading up to the 2021 fall football season. Here’s our look at the West Albany Bulldogs of the Class 5A Mid-Willamette Conference.

Cale shined as a first-year starting quarterback during the spring season. Mehl said he expects Cale to elevate his game as a senior. “He has a lot of tools and we need him to continue to grow and be the type of quarterback we need to run our offense,” Mehl said.

The 6-foot-5 Benedict has an ideal body for offensive tackle and the defensive line. “He is long, lean and very versatile,” Mehl said. “He definitely makes his presence known on the defensive side.”

Monson is another versatile senior lineman who causes problems with his athleticism. “He’s just a fast-twitch type of kid and a very good defender on the line of scrimmage,” Mehl said.

Barnes is an experienced senior who is likely to play substantial snaps on both sides of the ball. “Chase is just a great program kid. He’s going to do everything he can to help during a game,” Mehl said.

A returning starter at center, Heading is a proven commodity in the middle of West Albany’s offensive line. “Playing center is a tough task in itself, and Spencer is a smart kid and a hard worker,” Mehl said.

Perkens is another senior who is slated to play a major role on both sides of the ball. “We’ve had a lot of good linebackers the last few years, and he’s in that mold,” Mehl said. “He’s going to be a great defender for us and will help at tight end as an athletic kid.”

Kachel is a sophomore who has caught the attention of Mehl with his play at tight end. “He really has a lot of promise,” Mehl said. “He’s a young, talented kid with a great body and great hands. He’s kind of shifty for a big guy.”

Cavender might not be the most physically gifted Bulldog, but the junior’s motor is too strong to be kept off the field. “He’s a great teammate and plays the game how the coaches want the game to be played,” Mehl said. “He just plays really hard.”

Houston, rated a three-star prospect by 247Sports, received an offer from Oregon State after a solid sophomore season. Mehl said Houston will play corner on defense and a to-be-determined offensive role. “He’s an athlete for us,” Mehl said. “He needs to be a great cornerback for us and make an impact on the offensive side of the ball.”

A returning starter at outside linebacker, Miller is another versatile player who will get time on both sides of the ball. “He has a good body and is just a good, committed kid,” Mehl said.

The West Albany football program has made a concerted effort to move on from the past year and look forward. Dwelling on what could’ve been is not going to help the three-time Class 5A champions run down their first state title since 2013.

“There’s a small part of you that feels like we missed that opportunity last year to showcase one of the better senior classes we’ve ever had here,” Mehl said. “We have obviously moved past that and are excited about having a sense of normalcy in the game of football.”

Over the past two years, the Bulldogs graduated several high-end players who have moved on to college football. West Albany won’t have the same star power this season, but Mehl really likes the team’s depth in the defensive front seven, on the offensive line and at tight end.

“In the trenches, we should be really good on paper, and we like that,” Mehl said. “I think that’s going to be the strength of our football team, and usually when that’s the case you have the opportunity to do well.”

The Bulldogs are trying to create more depth in other areas, particularly at the skill positions. Mehl is confident that players will continue to step up as camp progresses.

“We do need to reload in some spots, and we have guys who have the ability to fill those positions,” Mehl said. “We have a lot of players we like; some are just a little more rough around the edges. But we will lean on them to be good for us.”

Though the ceiling of last season’s team might have been higher, West Albany and Silverton still are the class of the Mid-Willamette until proven otherwise. The Bulldogs and Foxes are scheduled to face off in Week 8, and they very well could meet again deep in the state playoffs.

“On paper we’re probably not as talented as we were the last two years, but it’s a new year and a fresh start,” Mehl said. “We’re just excited to get out there, get on the field and have something that feels normal.”

“Every team in our league has our attention. It’s a tough league and you have to bring it every single week.” — Brian Mehl