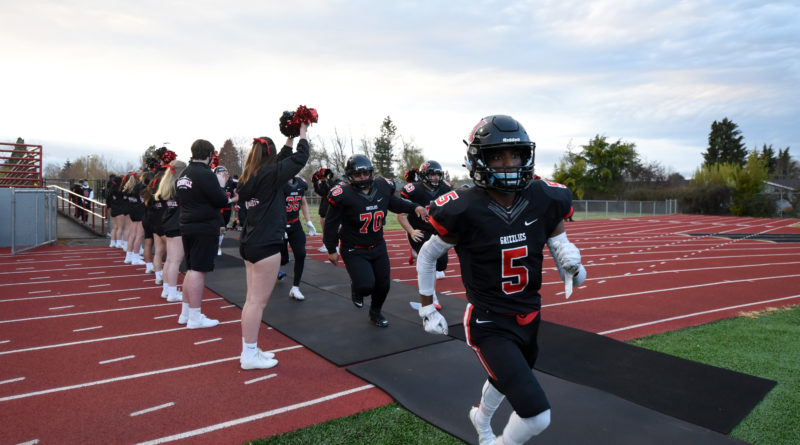 SBLive Oregon will break down every 6A, 5A and 4A team in the state leading up to the 2021 fall football season. Here’s our look at the McMinnville Grizzlies of the Class 6A Pacific Conference.

Hoskinson sat out the spring season as he prepared for a junior baseball season that saw him earn Pacific Conference pitcher of the year honors. The Cal State Bakersfield baseball commit can now focus on his return to the gridiron, where he was an honorable mention selection as a sophomore. “In my 21 years of coaching high school sports, he is one of the best-looking quarterbacks I have ever had the opportunity to coach,” Tomlin said. “He is a leader, and the team looks up to him for that role. It seems as though Ky is ready for it and excited to showcase his talents as a quarterback.”

Woods also has drawn interest from several colleges about playing baseball. He returns as a two-way all-conference selection from the spring season, having earned second-team honors at cornerback and honorable mention at receiver. “Braden is a resilient athlete who pushes the envelope every play and never takes a play off,” Tomlin said. “He is a tone-setter and leader on the team. You cannot ask for a better example to the young players of what hard work and dedication can do for you.”

Olmedo started in the spring at linebacker, and Tomlin expects him to become more of a contributor at running back this season. “He’s a tough kid and a great tackler,” Tomlin said.

Lefebvre is another returning starter at linebacker. He’s expected to become a big contributor on both sides of the ball.

Weeks was a starter on offense and defense as a sophomore. He returns to the team after taking the pandemic season off.

After watching film of Grizzlies games this offseason, Tomlin said Blank “showed the most growth on the team last year.” He’s a returning starter at receiver and in the secondary. Tomlin called him “a player to watch out for this season.”

Rapp started in the secondary in the spring and now enters the mix at running back.

Paloblanco is another player who stood out on film to Tomlin as showing great improvement over the course of the spring on both sides of the ball.

Jones-Nguyen started on both sides of the ball in the spring and is someone Tomlin said “has shown a lot of growth. He is expected to be a key contributor this year.”

Tomlin took over this summer from Ryan McIrvin, the school’s athletic director who stepped down as football coach after six seasons with a 25-29 record.

Tomlin had a good thing going in Lebanon, reaching the 5A playoffs in each of the past five seasons before the pandemic, including a state championship in 2016 at the school where his father, Don, coached from 1984-1998.

He never expected elsewhere to be McMinnville, but now that he’s there, he’s found the program buying into his vision of what Grizzlies football should look like and building on what McIrvin established.

Does Tomlin expect to compete for a Pacific title in Year 1?

“It’ll take a lot of things, but why not us?” he responded before acknowledging that it will take plenty of work to get to that point.

One area Tomlin already is seeing improvement is on defense, where the Grizzlies struggled during the spring season, allowing 38 points per game against five 6A opponents before posting a 30-0 shutout of 5A Forest Grove in the culminating week.

New defensive coordinator Mike Connor, who coached at Crescent Valley the past two seasons and previously worked with Tomlin at Sprague, has installed a physical defensive scheme that emphasizes flying to the ball.

“I think the kids are excited about the changes and look forward to showing off some of their talents in these new schemes,” Tomlin said.

It’ll take some time for those changes to take hold. A playoff berth might not be in the cards this season, but Tomlin has proven he can build a winning program.

“There is so much hidden talent here at McMinnville. We just have to find a way to tap into it. These kids are ready for the next step and want to try to step onto the stage at the 6A level, knowing it is going to take a ton of work.” — Ty Tomlin