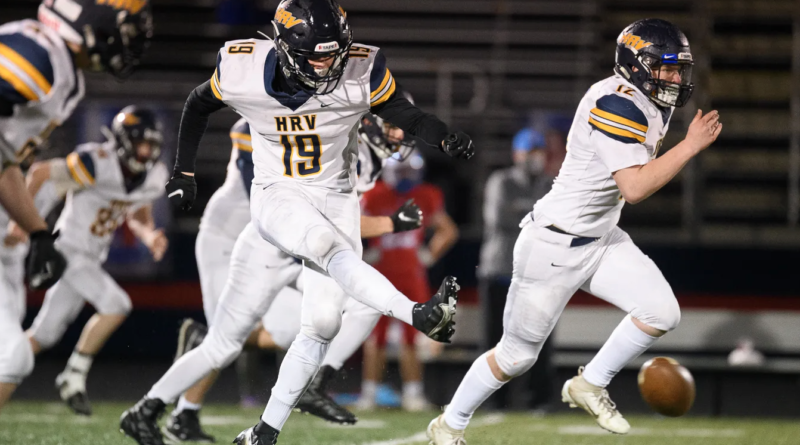 SBLive Oregon will break down every 6A, 5A and 4A team in the state leading up to the 2021 fall football season. Here’s our look at the Hood River Valley Eagles of the Class 5A Northwest Oregon Conference East Division.

OT/DL Henry Buckles, first team on offense and defense and lineman of the year

Hughes played quarterback last season and received all-Northwest Oregon Conference East honorable mention. The hope this season is that he moves back to wide receiver, a position that is seen as a better fit. “We would love for him to be a wide receiver,” Sperry said, “but it depends if we can get someone at quarterback for us. We’re just trying to get the ball in his hands as much as we can.” Sperry said Hughes, who last season was listed at 6 feet and 185 pounds, is getting interest from FCS schools. Hughes was voted first-team all-NWOC East as a returner.

Frazier is the Eagles’ leading returning tackler. “He’s a great athletic player, did really well on defense for us,” Sperry said. “We’re looking for him to expand his role on offense at wide receiver.” Having options at wide receiver could be important for Hood River Valley. With the graduation of running back Tanner Fletcher, who gained more than 1,000 yards in the six-game spring season, the Eagles’ offense is likely to need considerably more than the 23 completions it had last season.

The 6-1, 250-pound Whitaker was a two-way starter last season. He will be counted on to help lessen the impact of the loss of Henry Buckles (conference lineman of the year, now at Oregon State) and Emilio Castaneda (a first-team selection on both lines).

Wilson is among the Eagles’ top returning tacklers after starting as a junior. “He played a lot of minutes and did a great job,” Sperry said.

Sperry said Flores (6-1, 280 pounds) probably will be a two-way starter this season. “He played great minutes for us at defensive tackle,” Sperry said. “He’s a big kid, moves really well.”

Buckley, a first-team all-NWOC East cornerback, led Class 5A last season with five interceptions. Three of them came in a shutout victory over Redmond, a game in which he also recovered a fumble. On offense, the 6-2 Buckley plays receiver, and he had one touchdown reception in the spring. “I’m excited about him,” Sperry said. “We’re going to use him in different ways to get the ball in his hands.”

Frost missed the spring season on account of a knee issue. This season, he has a chance to be the starting quarterback and spring Hughes free to play outside. “We’re going to give Michael a chance to see what he can do and hope to use Trenton out wide and as a running back,” Sperry said.

As a sophomore, Burns backed up Fletcher, who led Class 5A in rushing. Burns averaged more than 10 yards per carry and scored one touchdown last season. Burns is 6-1 and 185 pounds — and fast, Sperry said.

Replacing the production of Tanner Fletcher, Class 5A’s leading rusher last season, and the protection provided by Henry Buckles, a future Pacific-12 Conference lineman, won’t be easy. The Eagles’ strengths this season rest more with their perimeter players than on the line, and that will result in them striving for more balance on offense.

“I always try for balance — I think balance is essential,” Sperry said. “You also have to take advantage of your assets. I think ours lie in our perimeter players. So, we’re trying to get them more involved in the game, whether it be passing or jet sweeps, screens. Just figuring out ways to get the ball in their hands on the outside will be advantageous to us.”

Hood River Valley’s masterpiece game last season was its 22-0 victory over Redmond, which won its other five games — four by shutout. Sperry called that game the best his team played last season. The Eagles lost their next two, though, and it was no coincidence, Sperry said, that Buckles was hurt for those losses.

“We were a different team (without him),” Sperry said.

How the Eagles’ offense adapts to the loss of Buckles and Emilio Castaneda looks like a key factor in the team’s success. Quarterback play, as with all teams, also will be a fulcrum point. Most other position groups have returners with varsity experience, but this will be Michael Frost’s first taste of varsity football.

“High school football, especially in a small town like ours, you get who you got and you try to do your best with them,” Sperry said. “That’s the fun of it. We have these kids who are going to come in and fill roles and get their chance to shine.”

Even without Buckles, Fletcher and others who contributed last season, expect the Eagles to be strong contenders for an OSAA Class 5A playoff spot and — in a best-case scenario in which Frost develops quickly and a generally unproven line protects him — perhaps even the NWOC East championship.

“We’re just trying to create an atmosphere of tough football players who are willing to go out there and be gritty and tough and keep getting up and keep battling. I think having an edge like that is important. No different from any other year.” — Caleb Sperry