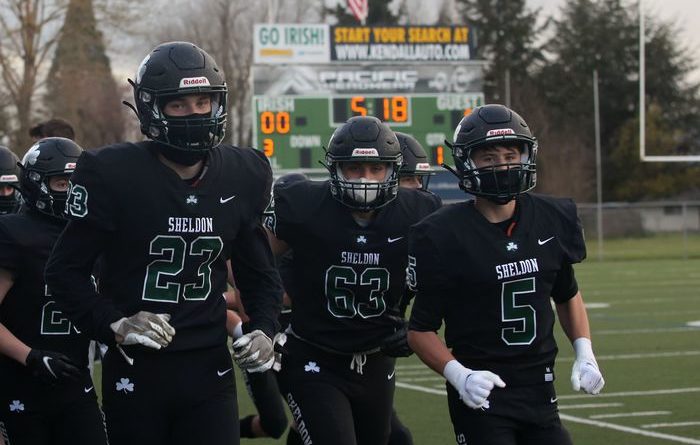 SBLive Oregon will break down every 6A, 5A and 4A team in the state leading up to the 2021 fall football season. Here’s our look at the Sheldon Irish of the Class 6A Southwest Conference.

Photo by Michele Bunch, for The Oregonian/OregonLive

Thomas, a first-team all-conference pick as a sophomore, is the complete package at quarterback. Line said Thomas reminds him of former Sheldon star and current assistant coach Jordy Johnson. “He’s got the decision-making ability, he can run, he’s got a good arm and he’s really accurate,” Line said. “We’ve been trying to create opportunities for him to use his skill set.”

Ritchie-Tuisue was a first-team all-conference pick on defense last spring and had a terrific offseason, Line said. He is a team leader and likely will be Sheldon’s best all-around lineman. “He suffered an injury last year that didn’t prevent him from playing, but I know it hindered him,” Line said. “He’s a guy that we’re really going to depend on.”

Yakovich is an imposing lineman at 6-foot-5 and 300-plus pounds. Line said the junior needs to improve his footwork to reach his lofty potential. “But he’s tough and he’s got a motor,” Line said. “He’s just got to improve in that area, but he could be one of the better guys we’ve had here.”

Robinson is on the smaller side for a starting running back, but he possesses excellent speed and running ability. “He’s a kid that we can put out in space and run from behind center,” Line said. “We can use him in a lot of different formations and utilize his skills.”

Leighton has ideal size for the wide receiver position at 6-foot-4 and 185 pounds. “He has really great hands and is super tough,” Line said. “He also runs really great routes.”

Merriman missed his sophomore season because of injury, but Line is expecting big things from the junior this fall. “He’s got tons of potential and is going to be a pretty good one,” Line said.

When asked about Sheldon’s prospects for the upcoming season, Coach Line was brutally honest. The Irish absolutely have the potential to be a quality team and do damage in the playoffs, but the program doesn’t have the same overall level of strength and athleticism as recent seasons.

“There’s no doubt we will have to out-execute everyone we play to be successful,” Line said. “We are not a team that is going to physically overwhelm anyone, so we’ve got to rely on our ability to execute and play with great effort. If we can do that consistently, I think we’ll be right in the mix.”

Sheldon’s biggest strength might be in the wide receiver room. Line said the Irish have about eight players who are reliable targets.

“It’s a really good group,” said Line, who also singled out returning starter Isaac Peters and uber-talented junior Zach McEwen. “All of them will be able to execute, make plays, catch the ball and advance the chains. Nobody will blow your doors off, but all of them are solid athletes.”

The receivers will be catching passes from Thomas, who has benefited from working with Jordy Johnson and quarterbacks coach Jason Fife.

“We’ve seen some real strides with Brock in the last couple of months with his play and his knowledge of what to do,” Line said. “We’re going to depend on him to make a lot of plays for us.”

The Irish also have a solid group of linemen, many of whom could play both ways. Along with the above-mentioned players, Line is excited about seniors John Gelsomino and Aidan Fuller and juniors Carl Harward and Tanner Thomas.

“There is still a lot of competition on the line,” Line said. “We’re really hoping to create some depth on both sides of the ball with the kids we have. We just have to see some kids step up.”

“We are an inexperienced team, but the kids have great attitudes and work ethics. I’ve been very honest with the kids: We’re not going to knock anybody off the ball; we’re just not that kind of team this year. But we can be very efficient and effective using our intelligence and leverage to make plays, move the chains and keep defenses on the field.” — Josh Line