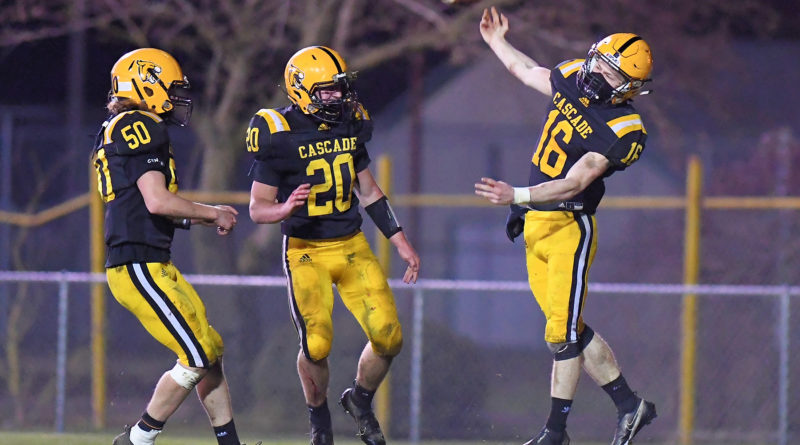 SBLive Oregon will break down every 6A, 5A and 4A team in the state leading up to the 2021 fall football season. Here’s our look at the Cascade Cougars of the Class 4A Oregon West Conference.

“We were running a little new wrinkle, and he told every kid in the huddle what they were doing. He knows exactly how I’m thinking,” Bennett said. “He is the leader of our offense.”

Even though he is the quarterback, he also plays defense as a lockdown cornerback.

“When you have athletes, you have to play them both (ways),” Bennett said.

“He has this natural knack on defense that is scary,” Bennett said of Lewis, who has been a starting linebacker since midway through his freshman season.

The team captain on defense, Lewis is a physical freak, weighing 190 pounds and with hardly any body fat.

On offense, he runs like a “bowling ball” with breakaway speed, the coach said. Bennett says Lewis is a Marshawn Lynch-type of running back with the way he runs. In practice, coaches need Lewis to dial it down a bit.

“He can only go about 70 percent at practice or he’d hurt everybody,” Bennett said.

Another Cascade player who has bought in to the system and the culture of the program 100 percent.

Tucker moved to tackle in the spring out of team need but is moving back to guard this season. He’s been a starter on the line since his sophomore year.

“One of those kids who works his technique right every single time and wants to get better every single day at practice,” Bennett said.

Smittle averaged nearly 20 yards per reception in the spring. He’s confident. And he backs up that confidence.

“He tells our quarterback, ‘Just lob it up. I’ll go get the ball.’ He doesn’t believe any DB can play with him,” Bennett said. “He also understands routes. That’s pretty awesome. It helps that he’s 6-3, 190. He’s mean when he goes up for the football, and he has no problem going across the middle, knowing he’s going to get hit.”

Smittle also is a powerful tool on special teams as a kicker.

If Lewis is the thunder, that makes Lance the lightning bolt. Quick. Elusive. He had a 200-yard rushing game in the spring. He also is a sack machine on defense.

After focusing on basketball earlier in his career, Sande was late to football, coming out his junior year, this past spring season. He had five sacks.

“I kept telling him it would help him in basketball to be more physical,” Bennett said. “He came out, played outside linebacker for us, and that was huge.”

Fast is not the right word to describe Kuenzi’s speed, the coach said. He’s faster than fast. And shredded. A physical specimen.

Defensively, he shuts down whatever side he is playing cornerback.

But he does that job in spectacular fashion.

There are only a few teams that get described as state championship contenders in August. Cascade is definitely one of those teams. And the Cougars are embracing the challenge, understanding why this team is thought of so highly by so many.

The program had one senior in the spring. All those younger players gained so much experience, and now they are ready.

“We’ve been talking about this class since they were eighth-graders,” Bennett said, noting this team is similar to the 2015 and 2016 squads. Cascade won a state title in 2015 and reached the semifinals in 2016.

“This team, I would say, is more talented than the ’15 team when it comes down to pure athletes,” Bennett said. “State title is the expectation. That is the mindset. They know what the end goal is. They’ve been putting in the work. They also know only one team gets to win it.”

This is the third season of running the new offense. The seniors have been part of it for all those years. They’re ready.

Bennett said the Cougars’ athletic ability allows them to have big plays at any time. So, if the offense puts up two or three good drives, and “hits two or three home runs,” Bennett said — well, that’s 30 points right there.

“Defensively, we have a natural swagger about us. We line up all our guys within five yards of the football and we dare you to throw deep,” Bennett said. “We’re in Cover Zero, bring-the-house-every-play.”

The offensive line does have some question marks. While last season’s team had only one senior, and he was not a lineman, this Cascade squad likely will have three new starters on the line. With COVID-19 and other challenges, the Cougars had to throw in a mixture of players on the line in the spring. Entering the fall season, the position group is more stable.

“Our line is going to be the difference between winning the title and not,” Bennett said, challenging his guys up front.

“Football is what brings our community together. For us, to have games with fans, that would be the best healing that any community could have. The community is chomping at the bit. You can feel the energy.” — Brandon Bennett