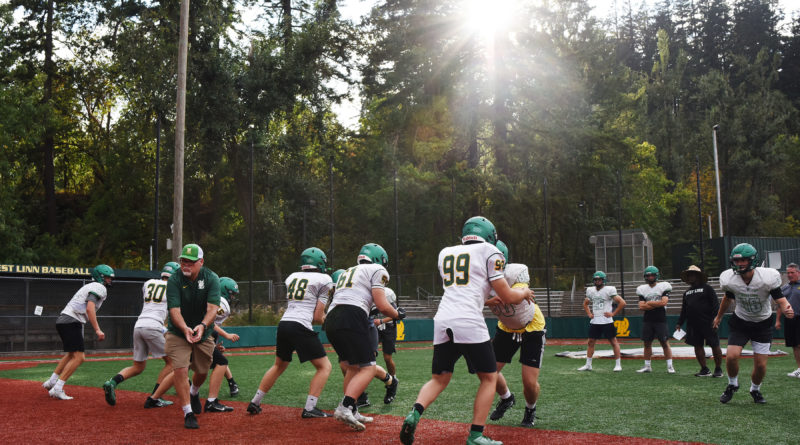 SBLive Oregon will break down every 6A, 5A and 4A team in the state leading up to the 2021 fall football season. Here’s our look at the West Linn Lions of the Class 6A Three Rivers League.

Ingle was the rare freshman to crack the rotation at West Linn, playing in four games in 2019 and making eight tackles. As a sophomore, he became a fixture in the starting lineup and dominated from the get-go, recording 36 tackles (six for loss), making three sacks and forcing two fumbles in earning first-team all-Three Rivers and second-team SBLive Oregon all-state honors at outside linebacker. He’s in a three-way battle to take over for Cal preferred walk-on Blake DeBisschop at quarterback. “He’s a tremendous football player who has a chance to be the state defensive player of the year,” Miller said. “He’s tough, strong and a ballhawk.”

Hamper, who has two older brothers — Luke (Bucknell) and Kyle (New Hampshire) — playing college football, received all-Three Rivers honorable mention on both sides of the ball in his debut season with the Lions at wide receiver (23 catches for 323 yards and two touchdowns) and outside linebacker (26 tackles, three tackles for loss, three pass breakups, one interception). He’ll move to safety and get time at running back and receiver to take advantage of his athleticism and position flexibility. Miller called him “a top five-six player in the state and probably the smartest player on our team. He’s like a coach on the team; he has such a high football IQ.”

Rams entered the starting lineup as a junior and earned first-team all-Three Rivers honors at right guard. Miller plans to move him to right tackle this season. “Just a tough kid, strong and athletic,” Miller said.

Cornell started the last four games of the spring season after an injury to Darren Wiancko and ended up receiving all-TRL honorable mention. A move to left tackle to take over for Holmes is forthcoming as college scouts have put Cornell on their radars.

With the Lions’ surplus of skill position talent last season, Reininga got lost in the shuffle a bit, but he was a stellar possession receiver, making eight catches for 86 yards and earning all-league honorable mention. “He’s gotten faster and a little bit stronger this summer,” Miller said. “He’s going to be a good all-league player.”

Harmon was DeBisschop’s primary backup in the spring, going 2 for 3 for 26 yards in limited action. He finds himself in a three-way battle with Ingle and sophomore Nick Sakys (6-2, 202) for the starting job this season. Harmon has been to several quarterback camps this summer. “He’s an extremely hard worker who looks good throwing the ball in shorts and a T-shirt,” Miller said. “He’s a good leader and a bright kid, but we need to see him produce at a high level 11v11 in pads.”

Jordy is the third Tawa brother to come through the program, following former West Linn stars Tim and Casey. Expect him to make an impact as a starter in the secondary and get plenty of snaps at wideout. “He’s a talented kid who understands our schemes,” Miller said. “He played meaningful minutes at cornerback last spring and helped us big-time.”

Kouame, who started for Beaverton in the spring, transferred to West Linn in early August, joining an already loaded backfield. Kouame ran for a season-high 155 yards against Sunset in Week 4 and finished the season with 421 yards and three touchdowns on 88 carries and 71 yards on nine receptions.

Kouame’s arrival will cut into Steinhauer’s playing time — just when the senior was ready to step into the lead back role after getting 12 carries for 121 yards and a touchdown while backing up all-leaguers Gavin Haines (a first-team SBLive Oregon all-state pick) and Cole Peters in the spring. “He doesn’t have the home run speed that Gavin or Dawson (Jolley) had, but he’s got some good punch and is a pretty stout kid,” Miller said. “He’s put in the hard work and is ready to go.”

VandenBrink is best known as a top baseball prospect, already having committed to Oregon State as a catcher. He also has set a goal of becoming as good as Peters on the football field, and Miller thinks he has the ability to do so. “He’s bright and has good anticipation for a young kid,” Miller said.

Another player whose best sport might not be football — Viuhkola’s father, Eric, is West Linn’s boys basketball coach, and Zeke was a first-team all-TRL combo guard last season — but who will make an impact for Miller on the gridiron. “He was the most improved varsity player last year,” Miller said. “He’s turned into a fantastic athlete, extremely quick, tough and hard to block.”

Howard is another baseball commit — to Oregon as a pitcher and an outfielder — who will be battling with classmate Hunter Haines (6-1, 165) for one of the cornerback spots vacated by the graduation of first-team SBLive Oregon all-state selection Clay Masters (team-high five interceptions) and second-team all-leaguer Brenden Crouse.

Staats was a standout on the JV team as a sophomore. Miller called him “a worker bee; someone who’ll hit you and your family.”

Watton and junior Jake Holmes (6-3, 227) have the task of stepping in for two all-league standouts in Mitchell Duea and Kaanan Huffman, the latter a first-team SBLive Oregon all-state selection on the defensive line. “Nate will be a dominant defensive end for us,” Miller said. “They’re both good replacements for two good guys.”

Miller came full circle in his coaching career during the pandemic, ending up back with the Lions after the folding of the XFL and a pit stop at Franklin. He returned to West Linn before last season to lead what he called “a special group of seniors” for one last run.

A state championship out of the picture because of the move of the football season to a six-week window in the spring, the Lions resolved to leave no doubt who was the best team in Class 6A — and with apologies to fellow unbeatens Sunset, Mountain View and West Salem, it’s safe to say West Linn did just that.

The Lions won their six games by a combined 228-50 score, finishing with an emphatic 33-7 romp of Newberg that didn’t result in a blue trophy but led Miller to buy the players rings with No. 1 emblazoned on them nonetheless.

“We didn’t need a blue trophy to validate what this team accomplished,” Miller said.

This season, though, a blue trophy is well within reach despite all the graduation losses. The Lions won’t be the overwhelming favorites they would have been in 2020, but they’ll be on the short list of title contenders as they hit the road because of a stadium expansion — they will play their home games at Wilsonville this season.

They’ll be protecting a deep but inexperienced group of skill players, with the biggest question mark at quarterback. The three-way competition between Harmon, Ingle and Sakys promises to be fierce, with Harmon the most experienced and Sakys flashing the most potential, with a quick release and great anticipation of routes. If Ingle ends up one of the odd players out, Miller will still create packages for him to take advantage of his toughness and cannon arm.

“Definitely, quarterback is a point of emphasis to get them ready for the bright lights on September 3,” Miller said. “My trade is training quarterbacks, getting them ready. We’ll be working hard at the mental part of the game.”

With senior wideout Zach Stefanich (6-1, 185) out with a hamstring injury until midseason, there will be opportunities for senior Barret Brundage (6-2, 185) and twin sophomores Gus (6-3, 195) and Wiley Donnerberg (6-3, 188) to get extended playing time as Miller typically rotates five or six players at receiver.

Wiley Donnerberg also appears poised to start at strong safety. The linebacking corps, led by all-state junior Ingle, will be the strength of the defense, loaded with talented players hardened by tough competition. Henderson and junior Calvin Reynolds (6-1, 225) will compete for the nose guard slot between bookends Watton and Holmes.

It’s a lot of new names and fresh faces for the Lions, but the expected finish is the same as usual — in the thick of the Three Rivers League title chase and a spot in the state quarterfinals for the seventh consecutive postseason.

“Last year, we had a pretty explosive offense, but this year, we might have to ride our defense a little bit and let our offense develop. We’re loaded with skill players. We’ll have a good running game, and we’re two deep at every wide receiver spot. But we need to gain an identity. We had some great leaders last year who helped us get through that COVID mess. Who is going to step into leadership roles is another point of emphasis for us. We’ll be in the conversation for playing for the blue trophy, but we’ve got a long way to go to get to that type of team.” — Chris Miller