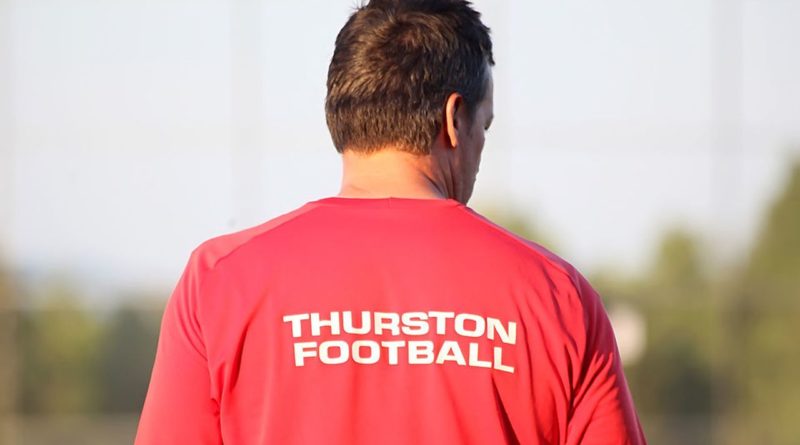 SBLive Oregon will break down every 6A, 5A and 4A team in the state leading up to the 2021 fall football season. Here’s our look at the Thurston Colts of the Class 5A Midwestern League.

Newell is one of the top players in Oregon and recently committed to the University of Nevada. He starred in the Les Schwab Bowl and is poised to do some serious damage to opposing defenses this season. “He’s obviously super high profile and plays at a really high level,” Starck said.

During his junior season at Willamette, Indell was a two-way monster for the Wolverines. He racked up 560 yards and nine touchdowns on 79 carries and led 5A with 84 tackles. He was third with 12 tackles for loss. He transferred to Thurston for his senior season and likely will start to draw attention from colleges as he joins a loaded Colts squad. “He’s another guy who played great in the Les Schwab Bowl and is just phenomenal,” Starck said.

There weren’t many running backs in the state who outproduced Indell. Knights was one of them, and now the two will operate out of the same backfield and form one of the most prolific running back tandems in Oregon. Knights was second in 5A with 956 yards on 81 carries, and his 13 touchdowns also ranked second. “Gavin was the outstanding back of the Les Schwab Bowl and he’s an all-state type of kid who is just really phenomenal,” Starck said.

How do you go about replacing the best offensive line in the state? The Colts were stellar up front last season — so stellar that all five of their starting offensive linemen are playing college football. That’s obviously outstanding for the program, but it does leave Thurston quite a few spots to fill. Starck believes his group of seniors is more than up to the test. “You just go next group up,” Starck said. “We’ve got some guys who have been working hard in this program and we’re excited about them. … We’re hopeful that those four will really step up. Then there’s a handful of seniors and other juniors that will compete for starting spots also.”

Witham started the final two games last season and looked sensational in doing so. As a result, he enters the season with a leg up in the quarterback race. But Starck wants there to be competition at all positions, and he said Boring is a great athlete who was at a bit of a disadvantage last season because he was recovering from an ACL tear. “I’m super happy with the depth that we have at quarterback, to say the least,” Starck said. “I know they’ll both play.”

Halstead earned first-team all-league recognition at linebacker as a sophomore, which isn’t an easy thing to do in the Midwestern League. Starck expects Halstead will continue to improve this season and team with Indell to form a terrifying two-headed monster at middle linebacker.

Starck describes Levesque as “all-state everything.” As a freshman in 2018, he kicked the winning field goal to secure Thurston’s first of back-to-back state titles. “We’re really excited to have him back for his senior year,” Starck said. “It’s always nice to have a good kicker and be strong in the kicking game.”

The pandemic cost Thurston an opportunity to compete for a third consecutive state championship last season and will delay the start of the program’s fall season. Once they take the field in Week 3, the Colts will be hungry to make up for lost time and will have 26 seniors who will try to lead the program to No. 3 — only a year later than originally hoped.

There are plenty of questions to be answered, of course. Thurston is replacing its entire offensive line, and the Colts will have a new quarterback. But with the talent they bring back at the skill positions and all over the defense, they have every reason to believe another state crown is within reach.

“It was a special group that did the repeat in 2018 and ’19,” Starck said. “I think this group needs to make its mark. Last year was hard for them — they didn’t have the opportunity for playoffs and to get on a run. I think that they would have. They’ve got one year to see what they’re all about, but it’s hard to compare those groups.”

Thurston’s biggest problem might be figuring out how to get enough touches for so many talented players. But Indell and Knights have unique skill sets and should play well off each other, and whoever wins the quarterback job should be more than capable of dishing the rock to all of the team’s talented pass-catchers.

More than anything, the biggest reason to be optimistic about the Colts’ title chances might be the close-knit nature of the team.

“The cohesiveness is very strong,” Starck said. “They’re a very confident bunch. Not arrogant or cocky, but very confident and eager to get on with it and get this thing going.”

“I’m not a big fan of the dual-quarterback system. We’ve done that in the past, and I didn’t love it. I would rather announce the starter and roll with it. Hopefully we’ll play well and get the chance to make some substitutions and get the other one some good, quality minutes.” — Justin Starck on Thurston’s quarterback competition