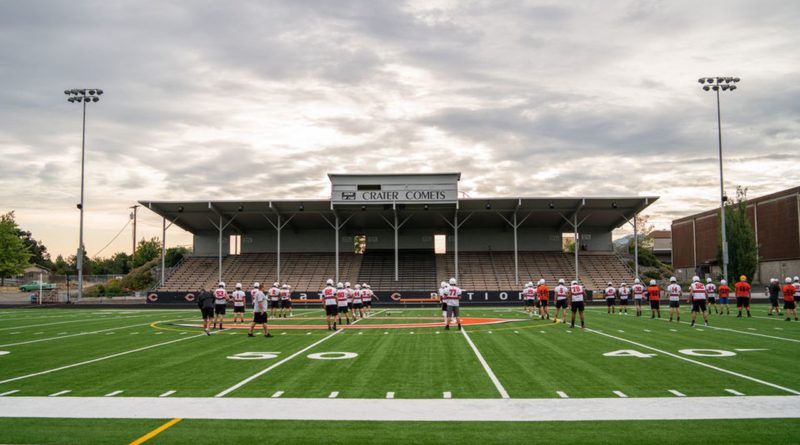 SBLive Oregon will break down every 6A, 5A and 4A team in the state leading up to the 2021 fall football season. Here’s our look at the Crater Comets of the Class 5A Midwestern League.

Lasater isn’t just Crater’s leader on both sides of the ball — he’s one of the top players in the state. Brown spent 12 years coaching college football and is entering his sixth season coaching high school football. He said Lasater is one of the best players he has coached. “He is one of the most intelligent guys I’ve ever been around,” Brown said. “He has a knack for being around the football on defense, and he’s got a real sense and understanding of the seams he’s trying to hit when he carries the football.”

Jordahl was among a handful of juniors in the state who played in the Les Schwab Bowl this summer. A hard-nosed player on both sides of the ball, Jordahl (6-4, 230 pounds) is unbelievably athletic for a player his size. He was a second-team all-state selection as a sophomore and could start to get some looks from colleges this season. “He’s flying under the radar in terms of recruiting,” Brown said. “He’s got a huge wingspan and is the strongest person on our team by leaps and bounds.”

It won’t be easy for the Comets to replace graduated quarterback Blake Eaton, but they have two players Brown believes are capable of leading the team to great things. Wood ran Crater’s JV offense last season and is a savvy quarterback who is more of a traditional pocket passer. Ausdemore is a similar type of quarterback and played last season at Roseburg. “They are both smart football players who are learning to make the right reads right now,” Brown said. “Both have good arms — strong arms. I would say Shane’s a more vocal leader and John’s going to lead more by example. Both have tremendous upside.”

As a freshman, Brehm started on the offensive line and never looked out of place. With a season of experience under his belt, he could be one of the most dominant players in the league. “He’s got college football written all over him,” Brown said. “He comes off the ball with bad intentions. He’s going to get in your face and be physical and play through the whistle.”

Smith hasn’t played football since he was a freshman and spent the past few years focusing on basketball. He decided to lace his cleats back up as a senior, and he could be Crater’s most dynamic threat in the passing game. “He’s shocked our coaching staff with his ability to adjust to the game of football,” Brown said. “He’s extremely coachable. He’s been a huge surprise for us and a blessing.” Smith is one of a few receivers who will try to step up as the Comets replace their three starting wideouts.

Standing 6-foot-4, Higginson starred on the JV team last season and will try to continue that impact at the varsity level. He has the size and ability to be a great possession receiver.

Brown describes Price as a crisp route runner with reliable hands. Like Smith, he is relatively new to football — his sophomore season was the first competitive season he played. “He’s taken to the game like he’s been playing his whole life,” Brown said. “Extremely coachable and hard-working dude.”

Crater delivered another stellar season during the abbreviated 2021 spring campaign, but for the second year in a row, the program graduated a boatload of top-end talent — five players from last season’s team are playing college football.

Brown has been transparent with his team in the leadup to this season.

“I told them, ‘Look, we do not have the same talent level that we had in 2020 and 2019,’” Brown said. “But that doesn’t mean that we can’t be as successful. Where we have to win football games is in the details.”

Two years after reaching the 5A championship game, Brown believes the pillars that helped that team find so much success still are present in the program. The Comets are a hardworking group that could experience some growing pains but also could blossom during the season if things click for the younger players.

They have one of the best offensive weapons in 5A in Lasater, with a strong, young core surrounding him. They will need to identify a starting quarterback, and they will need some relatively unproven players to step up in the receiving game.

Crater played almost an entire nonleague schedule in the spring and will be rejoining a league that is filled with similarly young, talented teams.

“What we have talked about is just ramping up the things that we already hang our hat on,” Brown said. “That is effort, attention to detail and doing things outside of the white lines that will help lead us to success. If we can do those things, I think we’ll be making a run at it going into November.”

“We haven’t seen any of the teams in this league since 2019. There’s been a ton of coaches turning over in the conference. It will be interesting to see what things look like as we head into the season.” — Berk Brown