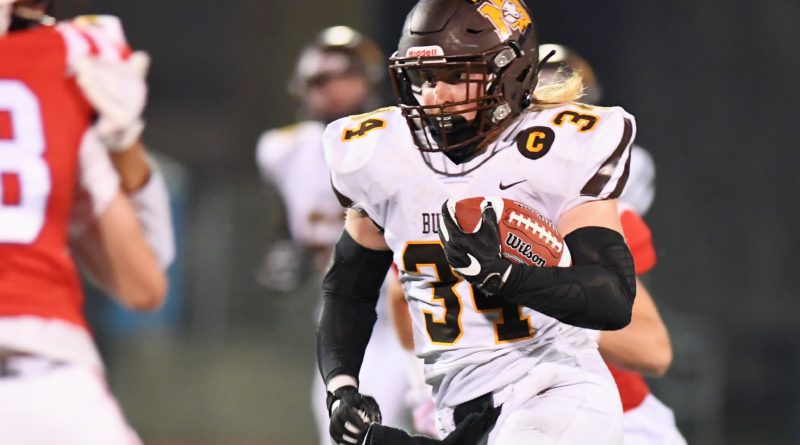 SBLive Oregon will break down every 6A, 5A and 4A team in the state leading up to the 2021 fall football season. Here’s our look at the North Bend Bulldogs of the Class 5A Midwestern League.

The Bulldogs are looking for a go-to receiver after the graduation of Bridger Holmes. In Roberts, they have a talented junior who has all the tools to fill that role. “He’s very athletic and very fluid,” Prince said. “He moves well. He’s just a great receiver.”

Green is North Bend’s leader on defense, and he’s a punishing ball carrier on offense. He racked up more than 300 yards on the ground in a reserve role during the abbreviated spring season. “He does a great job filling gaps and is a great leader out there for us defensively,” Prince said. “He’s more of a bruising kind of running back who really wants to run north.”

This will be Robinson’s second season starting at linebacker. On offense, he’s a shifty, speedy back who will form a nice 1-2 punch with Green. “He’s just a fast, physical kid,” Prince said. “He reacts really well and reads really well. We think he can make a lot of plays for us.”

Henderson is a three-year starter on the offensive line and one of the team’s veteran leaders. At 6-foot-5, 285 pounds, he will be one of the most physically imposing players in the Midwestern League this season. “He’s got a lot of reps and experience over the last couple of years, so we think he’s going to do a good job on both sides of the ball,” Prince said.

The Bulldogs will have a two-man competition to determine who will succeed Coleman Compton as the starting quarterback. “Craig is a great kid and a great athlete,” Prince said. “He’s worked hard the last four years. Cole is up-and-coming and throws the ball really well. He’s learned the offense very efficiently.” Prince said he and his staff will keep pushing the two players throughout camp until one creates some separation.

Mickelson was the only freshman on North Bend’s varsity roster in the spring and he even started as a ninth-grader. This season, Prince expects Mickelson to be a major difference-maker on both sides of the ball. “He’s 6-3, 185, and is probably one of the most athletic kids we’ve had come through here in quite a while,” Prince said.

Padgett is another 6-3 sophomore receiver who didn’t get the varsity reps Mickelson got last season, but he could be just as significant for the Bulldogs this season. He’ll be a big-play threat on offense and start at cornerback on defense. “He’s very fluid, gifted and has a lot of speed,” Prince said. “We’re going to try to get the ball into Padgett and Mickelson’s hands as much as possible.”

The Bulldogs are bringing back one of their smallest senior classes in recent memory. They also do not have a ton of juniors. Prince acknowledges that because North Bend is one of the smallest 5A programs in the state, those types of small classes are going to occur from time to time. But he and his staff are excited about the upperclassmen the Bulldogs do have, and about the gifted group of sophomores that is coming through.

“We’re going to be young this year,” Prince said. “So, we’re going to focus on getting better. Every day, every practice, we want to get better and build that mindset.”

Prince said one of his main goals for the season is for the Bulldogs to do a better job finishing games than they did during the spring.

“We had a hard time finishing — whether it was during practice, or games, we had a hard time understanding that you’ve got to play four quarters and be focused for four quarters,” Prince said. “I’m really hoping this year we see growth in that direction. If we learn to finish, I think success will come our way.”

North Bend has several sophomores at the skill positions, and those players aren’t interested in waiting to make their mark in the Midwestern League.

“Realistically, I really want to see us battling for a playoff spot by the end of the season,” Prince said.

“We’re three wins away from our 500th win as a program. There’s probably a small handful of schools in the state who can claim that. We’re right there knocking on the door.” — Gary Prince