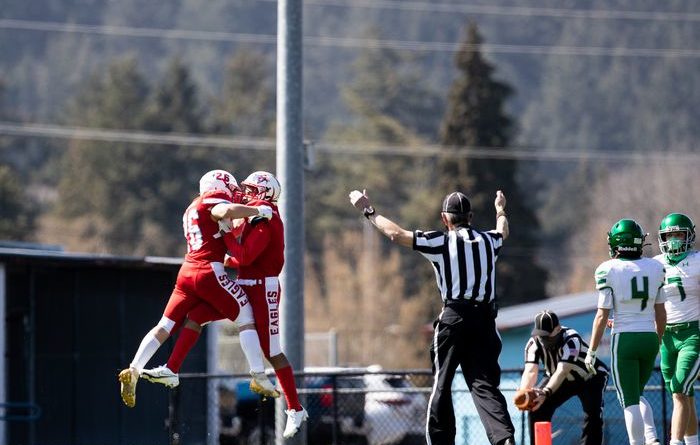 SBLive Oregon will break down every 6A, 5A and 4A team in the state leading up to the 2021 fall football season. Here’s our look at the Centennial Eagles of the Class 6A Mt. Hood Conference.

Photo by Howard Lao, for The Oregonian/OregonLive

Boyd was ticketed to play wide receiver in the spring season — “He probably has the best hands in the program,” Self said — but was moved to quarterback after presumptive starter Langston Williams-Lomax moved to Texas. “He did a great job in the couple of games we got in,” Self said. Boyd has put in the work in the offseason to prepare for what could be a big junior year for the Eagles of Gresham. “I’m expecting a really, really big season out of him,” Self said.

At the end of the spring season, teammates voted Poirier a team captain. “Which is pretty impressive as a sophomore,” Self said, “that he overwhelmingly garnered votes from everybody.” Self called Poirier the team’s emotional leader, and his selflessness is demonstrated by his willingness to switch positions in the spring, from fullback to guard, because of a shortage of linemen. Self said Poirier might be moved to tight end on offense this season.

Allen was unable to play in the spring season on account of foot surgery, but he remained a part of the team and was a regular at practices. Allen is in the range of 6-feet-4 and 260 pounds and armed with what might be regarded as deceptive athleticism. “He has great feet and speed,” Self said. “He’s probably among our top 10 fastest guys.” Self said Allen has the potential to attract attention from college recruiters.

Muongvang will play center and inside linebacker as part of a capstone to four years of grinding to make himself a better football player. “He’s the kid every coach loves to have,” Self said. “He’s a kid who has put in four years in the weight room and has made himself into a very good football player.” Muongvang started off as a running back and played center for the first time in the spring season. Self called Muongvang (6-0, 215 pounds) the runt of the litter among the offensive line. “He’s a super strong, powerhouse type of kid,” Self said, adding that he believes Muongvang also has a future in college football.

Cope broke a collarbone in a 7-on-7 event before the August moratorium week. The hope is that he returns early in the season. In the meantime, he’s making an impact as a leader. “He’s out there helping coach the freshmen, getting them up to speed,” Self said. “He’s one of our senior leaders and does a great job.”

Not the fastest receiver, Lanning finds ways to get open by running sharp routes. Self called him a Steve Largent-type in a reference to the former Seattle Seahawks wide receiver whose Pro Football Hall of Fame biography says he had “only average” size and speed. Lanning “will get open because he’s technically very sound,” Self said. Lanning also drew praise for his dedication. “He’s put a lot of work in over four years,” Self said.

The past two seasons, Centennial’s preseason quarterback plans were scuttled — by an injury early in 2019 and by a transfer in the spring season. Self expressed considerable optimism about Boyd, who will have a proven offensive line in front of him this season.

“We’re super excited about the offensive line,” Self said. “If we’re solid up front, we can do a lot. It really does help our offense roll. Those kids have put a ton of time in the weight room.

“I think we’ll be pretty decent offensively just because of that offensive line — which really helps when you have a quarterback who is new to the position. That’s kind of exciting.”

It wasn’t that long ago — in terms of games played — that Centennial was in the OSAA Class 6A playoffs. The Eagles have played 11 traditional 11-on-11 games since that 2018 first-round contest.

“We’re really pretty high on what we think we can do,” Self said. “You always hate to put numbers on it. We really feel like making the playoffs is a doable opportunity for us.”

For that to happen, Centennial probably will need its first-string players to stay healthy. Like many programs, Centennial has lost some numbers during the pandemic.

The schedule appears to work favorably for the Eagles. It’s not until the second half of the regular season that they will face one of the generally acknowledged Mt. Hood Conference heavyweights (Clackamas in Week 6). If the team can develop and mature during the season, if the starters can stay healthy and if Boyd can continue on the trajectory he plotted in the spring, Centennial’s Week 8 and Week 9 games (at Reynolds and at home against Barlow) could have a lot at stake.

“We’ve really been talking to the kids a lot this offseason about our potential,” Self said. “It stays potential until you work hard and make it a reality. We feel like we have the potential to be a playoff team. And once you’re in the playoffs, you let it roll.”

“I really think we’re ready to take another step forward. Hopefully we can keep it rolling. We have great kids here, a great supportive network of parents.” — Butch Self